(Minghui.org) “When I was released, I was mentally disordered from severe torture. I couldn't even recognize my son, who came to receive me.”

A woman in Northern China wrote the above statement in her criminal complaint against Jiang Zemin, a former leader of the Chinese Communist Party (CCP). Under Jiang's policy of persecuting practitioners of Falun Gong, she was almost tortured to death. Two of her sisters passed away under the pressure of the persecution.

Detention and Forced Labor for Petitioning the Government

Ms. Gao practiced Falun Gong for many years and saw an improvement in her health. However, things changed after Jiang Zemin launched the persecution of Falun Gong in 1999. Police arrested Ms. Gao and demanded that she do a TV interview to denounce Falun Gong and its founder. Officers threatened to detain her if she refused.

Based on her own experience, Ms. Gao could not disparage Falun Gong. After serious reflection, she wrote several letters to explain the spiritual discipline. She delivered them to local government offices and then headed to Beijing to appeal for Falun Gong.

She arrived at the Beijing Appeals Office in March 2000. Police from her town found her and brought her back. They detained her for a month and fined her 200 yuan (US $30), a relatively large amount for Chinese who live on a tight budget.

Ms. Gao went to Beijing to appeal again in October 2000. She was detained in Beijing for 18 days before being taken back by local police. Police detained her for two months and put her in a forced labor camp for a year. Torture at the camp made her so mentally disordered at her release that she could not recognize her son when he came to pick her up.

Upon her release, Ms. Gao recovered her health after doing the Falun Gong exercises.

However, police followed and harassed her. They arrested her and ransacked her home on April 27, 2003.

Officers interrogated her for five days, during which time she was not allowed any sleep and placed in a detention center. Ms. Gao held a hunger strike for 16 days and fell into critical condition. The detention center returned her back to police custody.

The police put her in another detention center, where she was handcuffed to an iron chair and interrogated for over ten days. 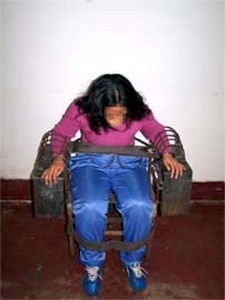 “Because I refused to admit that I was guilty, detention center director Yang Zhengkui led three other guards to beat me with a thick rope,” Ms. Gao said. “I fainted. Yang threw me in the air. When I fell, he stepped on me to beat me. He hanged me on a door frame and beat me. Guards put me down after I lost consciousness and they thought I died.”

“When they discovered that I was still alive, they hung me up again and beat me for an hour, until the next shift arrived. Afterward, I could not move my arm for a long time. I had so many injuries on my body that all the inmates in my cell cried when they saw me.” 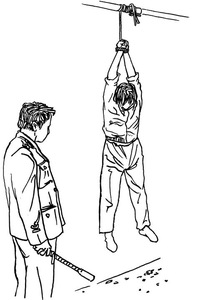 Another practitioner wrote down a description of Ms. Gao’s beating on the inside of her shirt and tried to get it out of the detention center. Guards discovered the shirt and gave Ms. Gao several beatings to make her tell who wrote the account. Ms. Gao refused to tell them.

On the fourth day, officers came to her cell to beat her again. The practitioner who wrote the account could not stand watching guards beat Ms. Gao, so she turned herself in. The guards beat both of them. They hanged both women, and the other practitioner stopped breathing. Guards took her down and threw her back in her cell without giving her medical attention. It took the practitioner nearly two hours to return to normal breathing.

“We were beaten almost every day and sometimes four or five times a day. On the day of my court hearing, I had severe injuries on my head and face. My face and eyes were all black and blue.”

After being detained for 18 months, Ms. Gao was sentenced to eight and a half years in Gansu Provincial Women's Prison.

Ms. Gao was put in a solitary cell, as she refused to admit guilt. She was also handcuffed to a “tiger bench” for a week.

“I was forced to do intensive labor from 6:30 a.m. to 9:30 p.m. My only breaks were the two half-hour breaks for lunch and dinner. I was not given bathroom breaks. … I became skinnier and skinnier and frequently bled.”

“I fainted several times. I once fainted while working in a muddy garden, and my clothes were full of mud. Guards pulled me up and forced me to continue the work. … They sent groups of three to five inmates to monitor me around the clock. … The torture made me absentminded. I had swollen feet, a bloody nose, and stomach pain that made me unable to sleep at night.”

“My third sister also practiced Falun Gong. Her husband, under the authorities' pressure, beat her, destroyed the tape recorder that she used to play exercise music, and burned a portrait of the founder of Falun Gong and Falun Gong books. My sister could not bear the pain. She passed away in great sadness at the age of 46.”

“My eldest sister worked in Lanzhou City, Gansu Province. She came to visit me in the labor camp in 2004. The guards would not allow her to visit me. Instead, they threatened, cursed, and beat her, causing her to have a heart attack. Despite her treatment, she visited me at the prison every month. By the time I was released, she had passed away from the stress.”

“Daughter Testifies for Father Tried for His Faith in Hubei Province”