(Minghui.org) Falun Gong practitioners from Switzerland, Germany, and France held a Falun Gong Information Day in downtown Basel, the third largest city in Switzerland, on October 29, 2016. The activity exposed the persecution of Falun Gong by the Chinese Communist Party (CCP) and signatures were collected on a petition calling for an end to the CCP's state-sanctioned organ harvesting from living practitioners. 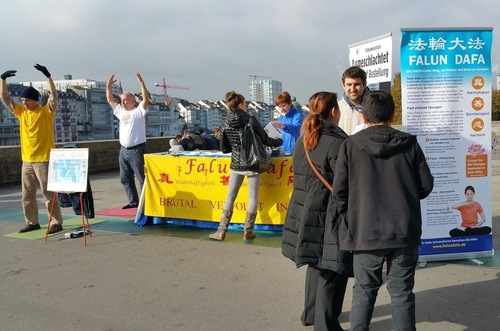 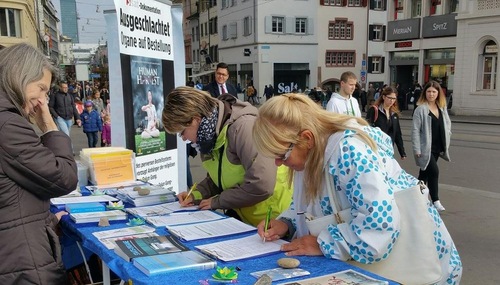 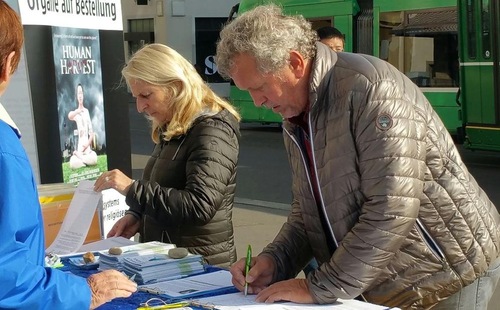 The activity was held on a road leading to two large commercial districts, next to the bridge on the Rhine. It happened to be the day a trade show was being held in Basel. Many Chinese people approached the Falun Gong booth. Some were on their way to the trade show, and some were students or tourists. Falun Gong practitioners took the opportunity to tell them the facts about the persecution, and helped many quit the communist organizations they had joined.

One middle-aged Chinese man had heard about the persecution, but he hesitated to withdraw from the communist organizations at first. A practitioner told him the difference between loving the country and loving the Party, and that being patriotic didn't mean he had to agree with the crimes of the Communist Party. The man thought it was right. He happily quit the Youth League, and took a picture with the practitioner before he left.

Another middle-aged Chinese man greeted a Falun Gong practitioner, saying, “Good man!” He said that Falun Gong practitioners were very good people. The practitioner told him about the importance of seeing through the CCP's lies about Falun Gong. The man said he had received truth clarification information through phone calls, flyers, and text messages in China. He had also seen Falun Gong activities overseas. After hearing about the significance of quitting the communist organizations, the man easily decided to quit the Youth League and the Young Pioneers.

Local residents and tourists from other countries showed great support for Falun Gong practitioners' work to stop the persecution.

Mr. Chebili said it was terrible for the Chinese government to commit crimes such as organ harvesting, and that it was a crime against humanity. He said it challenged the basis of human rights. He asked, “What can I do to stop this crime?” He signed all the available petitions at the Falun Gong booth.

Some people became interested in learning Falun Gong. Some pressed their hands in front of their chest to thank the Falun Gong practitioners.