(Minghui.org) Falun Dafa’s Tian Guo Marching Band was invited to participate in this year’s 96th Veterans Day Parade in San Francisco. This was the eighth year the band has participated. Over 80 groups participated in the November 13, 2016 event, which started at Fisherman’s Wharf and proceeded along the Embarcadero waterfront. 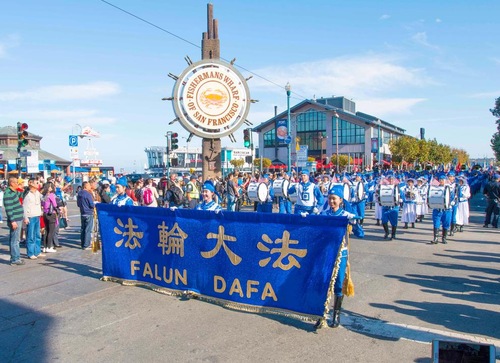 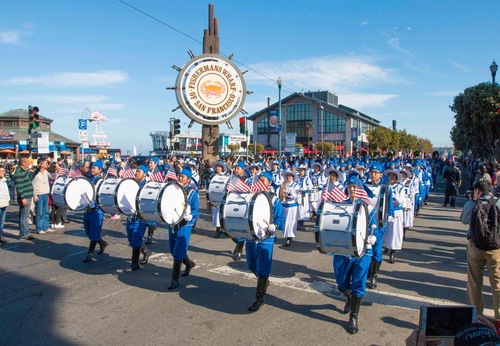 Spectators applauded the band, impressed by their blue and white uniforms and music. Grand Marshal Wallace Levin said that it was the best group he had ever seen. “We are really happy to have you here because your performance is really great,” he said.

As a third generation San Franciscan and a veteran of the Korean War, Levin has chaired the Mayor's Memorial Day Citizens Committee for more than ten years. He knows about the persecution in China, and that as a result of the Chinese Communist Party's influence, Falun Gong practitioners had been barred from some events related to the Chinese consulate in San Francisco.

He continued, “I am proud of you, and you should be proud for yourselves, because of your faith and your courage.” He said he hoped practitioners would come again next year. “You represent traditional Chinese culture. The Tian Guo Marching Band is not just good, it is great!” 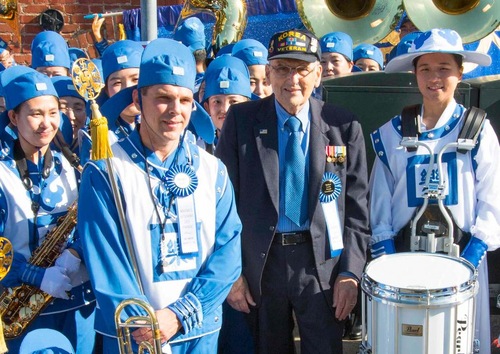 Pia from Denmark said she liked the band very much, especially the words of Truthfulness-Compassion-Forbearance on the banners held by practitioners. “They apply to everyone and they are universal principles.”

Hashim, a tourist from Kuwait, said he could feel energy from the music played by the Tian Guo Marching Band. “From the music to the uniforms, everything is awesome!” he added.

Mr. and Mrs. Zhang from China took many pictures of the band. During the 17-year-long suppression in China, they have rarely seen practitioners' presence in public. They were both impressed and inspired by the beautiful melodies. 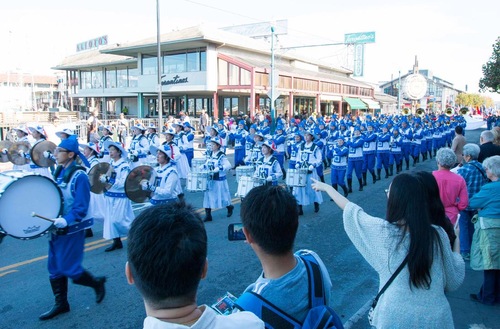 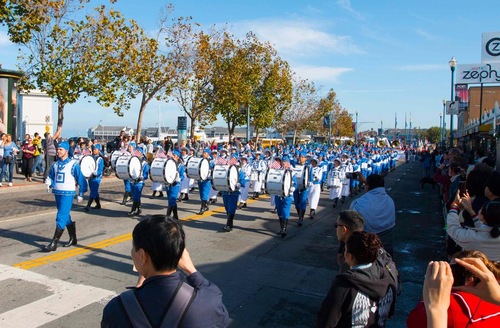 Mr. Hung, a Chinese living in Malaysia, had previously read about Falun Gong on the Internet. “But this is the first time for me to see such a parade in person. It is so good,” he said.

He hopes that one day such a performance could take place at Tiananmen Square in Beijing, “That would be really wonderful,” he said.