(Minghui.org) Today's news from China includes incidents of persecution that took place in 12 cities or counties in 9 provinces. According to this report, 17 Falun Gong practitioners were subjected to mistreatment during their detention, and at least 10 were illegally arrested. 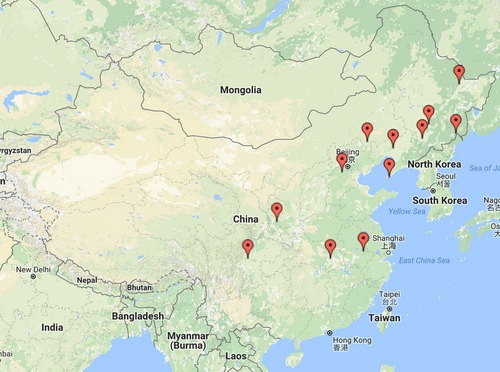 Ms. Xu Mingxia is a practitioner from Beiwushao Village, Fengming Town, Qishan County, Baoji City. She was arrested on February 26, 2016 and sentenced to eight months. She is currently held at the Mei County Detention Center.

Ms. Zhang Shuxu was tried in the Dalian Development Zone Court on the morning of October 24, 2016. She defended herself and pleaded innocent.

Ms. Zhang was arrested on June 28, 2016. Police ransacked her home and confiscated her Falun Gong books and informational materials, as well as her computer and other personal belongings.

The practitioners are still detained. Their cases were submitted to the court in July, and a trial was scheduled for October 28, 2016.

Ms. Zhou Lingxiu, in her 70s, was reading a Falun Gong book with four other practitioners when officers from Jintang County broke into her home. They took away her Falun Gong books. Ms. Zhou lost consciousness and collapsed during the raid. The police arrested the other four practitioners.

Mr. Miao Weimin was last seen riding a bicycle between October 17 to 19, 2016. His family went to his home on October 22 and found it had been ransacked. His whereabouts are unknown.

Ms. Zhou Yuqin was arrested on October 20, 2016, when she was distributing desktop calendars that contain Falun Gong information. She was given a 15-day detention by the Jiefang Road Police Station.

Ms. Xu Jianying and Ms. Luo Shuzhen of Xinzhou District were arrested for distributing Falun Gong informational materials on the afternoon of October 5, 2016, by officers from the Jiujie Police Station. They were detained for five days at the Wuhan City Detention Center.

Six officers from the Hujiazhuang Township Police Station ransacked Mr. Xu Jianhua's home on October 21, 2016 and confiscated all of his Falun Gong books.

Mr. Gao Chong and Mr. Hu Junyou from Nanpingfang Village, Songshan District were arrested on December 14, 2015, when they were distributing calendars with Falun Gong information in Qiaotou Town, Ongniud. Police searched their homes. They were held first at the Ongniud Detention Center, and then at the Yuanbaoshan District Detention Center. They were sentenced secretly to three years in prison in June 2016 and transferred to the Inner Mongolia No. 4 Prison in Chifeng City in September.

Ms. Xu Shulan was arrested on the morning of September 5, 2016, by officers from the Domestic Security Division. The police ransacked her home and confiscated three cellphones, Falun Gong books, and other personal belongings. She was released that afternoon.

Mr. Liu Zhengli lives in Qushui Village. Officers from the Domestic Security Division ransacked his home in mid-September and confiscated his Falun Gong books and other personal belongings.

Ms. Meng Fanqin, Ms. Zhou Guilan, and Ms. Wang Yuxiu were arrested at Ms. Meng's home on the morning of September 20, 2016, by six officers from the Domestic Security Division. The officers took away Ms. Zhou's cellphone. They ransacked the homes of Ms. Meng and Ms. Wang and confiscated Falun Gong books and other personal belongings. They were taken to the Domestic Security Division and released in the afternoon.

Officers from the Taihe Town Police Station broke into Ms. Liu Baoyu's home on the evening of October 24, 2016, and took her blood sample by force.

“Happiness Is Easy to Obtain”