“The More That People Know About Falun Gong, The Sooner The Persecution Will End”

(Minghui.org) More than 6000 Falun Gong practitioners from all over the world assembled in San Francisco last week. They are from all walks of life but share a common wish—to raise awareness about the peaceful spiritual practice of Falun Gong and about the persecution it faces in China.

Ms. Hu was not able to move her arms or legs for some 20 years before she began practicing Falun Gong. She also suffered from heart disease and rheumatoid arthritis. She could not even open her palms. 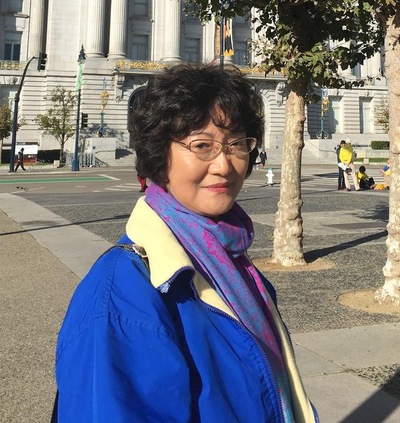 Ms. Hu is pleased that more and more Chinese tourists are willing to talk about Falun Gong these days.

“There was not a single day that I didn't feel the pain. I could not go through a day without painkillers or hormone injections,” Ms. Hu said, “until a friend of mine told me about Falun Gong in 1995.”

“I started to practice and read the Falun Gong books, and a miracle happened. In just three days, all the pain was gone,” she said.

“This is why I refused to give up the practice when the persecution started in 1999. Falun Gong renewed my life! I still practice now, of course, but also I try to tell all the Chinese people I meet what Falun Gong really is, and tell them not to believe the communist party's propaganda.”

Ms. Hu came to Los Angeles in 2004. She is happy to have the freedom to practice her beliefs in the USA. She often goes to tourist spots to talk to Chinese visitors about her experiences.

Dorian Fillip, a Romanian-born jewelry dealer from New York City, had lived with depression for years. He felt like he was living with no direction, as if in the dark. He also had cardiovascular diseases. 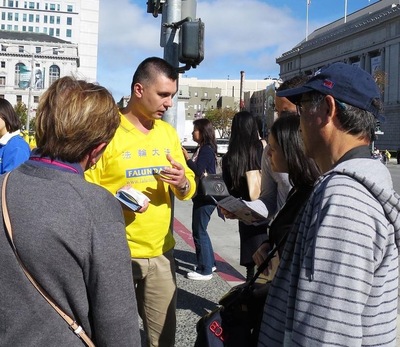 In 2014, a friend sent him a link to a Falun Gong website and he soon began to practice. His life immediately changed for the better. He suffered less from stress and broke out of his depression. He soon felt happy every day. Even his doctor was amazed to see the improvement.

Dorian hopes that he can talk to as many people as possible during his trip to San Francisco, telling them about his experience and about the persecution of Falun Gong in China.

“I am happy every day,” he said. “Before I only thought of myself, but now I try to follow the teachings of Falun Gong, Truthfulness-Compassion-Forbearance. I started to care about other people and treat them nicely. So, the relationships between me and my colleagues, friends, and family got much better. I feel great.” 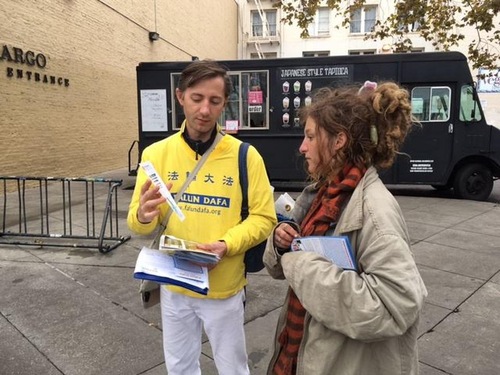 Christophe Flecharo believes that coming to San Francisco and talking to the tourists is a great way to let more people know about the persecution.

“More and more people are willing to take our materials.”

Ms. Lin Yinxue from Taiwan works for her family business. She often goes to Hong Kong with the goal of telling the Chinese tourists about Falun Gong. Ms. Lin started practicing in 1999. 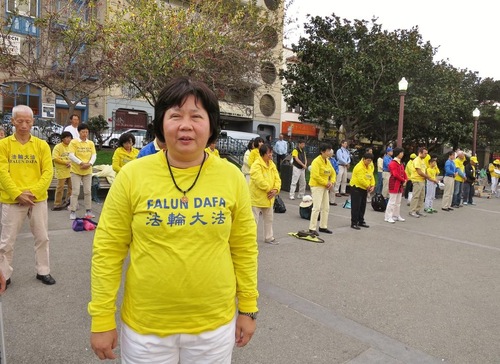 “Once a Chinese guy asked how much I was paid to talk to tourists. I told him that I am a businesswoman and that I talked to tourists as a volunteer. He was surprised.”

“I come to Hong Kong all the way from Taiwan, and this is my simple wish. I wish you understand what Falun Gong really is. We talked for a while, and it seemed that he changed his impression of Falun Gong, and thanked me for telling him all this.”

“I've learned a lot from Falun Gong. It has answered many questions about life that I had before,” she said.

“Many people around me feel lost in life, and they don't know the purpose of life. The material life cannot satisfy an empty heart. The Falun Gong teachings help me see what’s fundamental in life. Ever since I started practicing, I have had confidence at each stage of my life. I learned why I need to put others first. With this principle, I always feel happy.”

“My pains all disappeared and I no longer felt lost. Even when I run into seemingly impossible difficulties, I have the confidence that I will overcome them.” Her mother, sister, and brother-in-law have now taken up the practice as well.

“Last month I joined the grand march in Hong Kong. I felt that the communist party's followers, who were paid to make troubles for us, were out of energy. They were not as rampant as before. In contrast, more and more Chinese now are willing to accept our materials and talk to us.”

“Before many people had earphones in and didn't even look at us when we approached. But this year things are different. I passed out a lot of flyers in just a few minutes,” Ms. Lin smiled. “The more that people know about Falun Gong, the sooner the persecution will end.”