(Minghui.org) Today's news from China includes incidents of persecution that took place in 14 cities or counties in 7 provinces. According to this report, at least 34 practitioners were illegally arrested. 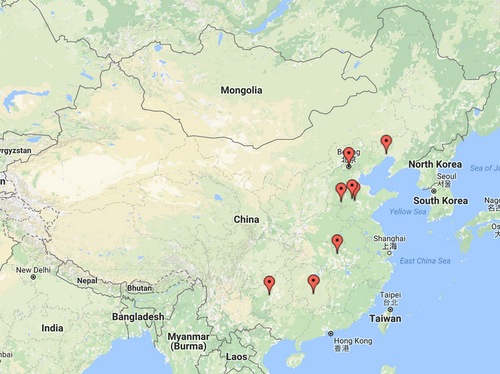 Ms. Wu Yinglan was arrested by officers from the Tianqiao District Police Station at the end of September 2016 for talking to people about Falun Gong. She is detained at the Zhonggong Detention Center.

Ms. Li Yulan, Ms. Lin Yanzhen, and two other practitioners were arrested for posting Falun Gong materials in Changqing District on September 27, 2016. The four practitioners are held in the Jinan City Detention Center.

Mr. Liu Zhen and Mr. Xu Qinghong (from Yangerzhuang Village, Bachalu Town, Linqing City) were arrested by officers from the Beitao Police Station at the order of Yao Guangmin, director, on September 28, 2016 for talking to people about Falun Gong in Beitao Township. Both practitioners were transferred from the Beitao Police Station to the Guan County Police Department and then to the Liaocheng Detention Center by Liu Tao, squadron leader at the Guan County Domestic Security Division. Mr. Liu was detained for 10 days, Mr. Xu for 12 days.

Ms. Zhou Ailing and Ms. Mao Yuanrong were arrested by officers from the Longchi Police Station for talking to people about Falun Gong in urban areas on the afternoon of October 1, 2016. Ms. Mao was released that evening. Ms. Zhou was sent to the Macheng City Detention Center.

Ms. Deng Honghua from Tianhe Village, Jiangjiaqiao Town was arrested by officers from the Fengzhiping Police Station on September 14, 2016 for distributing Falun Gong materials. Her whereabouts are unknown.

Mr. Tao Yongchun and his wife, Ms. Xu Lingli, were arrested on July 17, 2016. The couple are held in the Chaoyang Detention Center.

Officers from the Shijicheng Police Station, Guanshanhu District broke into Ms. Song Lianying's home in the Longjinyuan Residential Community, Guanshanhu District on August 22, 2016. They confiscated a notebook computer and Falun Gong books. Ms. Song was taken to the police station, where officers forcibly took blood samples from her. She was not released until early the next morning.

Mr. Ma Liguang from Heishan County was arrested by Wang Weijing and other officers from the Heishan County Police Department's Domestic Security Division on August 8, 2016. He was taken to the Jinzhou Detention Center. The police have transferred Mr. Ma's case documents to the Heishan Court.

Mr. Wang Zhuang, 60, was arrested around July 10 for refusing to renounce Falun Gong.

This is not the first time Mr. Wang has been targeted for his faith. He was sentenced to three years in prison in 2003. His wife divorced him, and he moved in with his father after his release.

Jiamusi police kept close surveillance of Mr. Wang while he was living with his father. In order to avoid arrest, he fled Jiamusi and moved to Dalian.

Mr. Wang returned to Jiamusi in July after his 85-year-old father took a fall and broke some bones. Not long afterwards, both Jiamusi and Dalian police came and arrested him.

His father and siblings are calling for his release.

Ms. Meng Huan was sentenced to 4.5 years in prison for filing a criminal complaint against former Chinese dictator Jiang Zemin for intiating the persecution of Falun Gong.

The 60-year-old woman was arrested on September 19, 2015 for talking to her local street committee about her lawsuit against Jiang. Her home was ransacked the next day, and she was transferred to the Xiqing District Detention Center two days later.

Ms. Meng had already been sentenced to prison once for her faith. She was given 4 years in 2007 and suffered brutal torture in prison.

Ms. Wu Yuping was tried on September 22 for refusing to renounce Falun Gong, a spiritual discipline being persecuted by the Chinese communist regime.

Two lawyers defended her constitutional right to freedom of belief. They pointed out that no law in China criminalizes Falun Gong, and thus demanded her acquittal.

Prosecutor Sun Aimin kept interrupting the lawyers and Ms. Wu as they were presenting their defense arguments. Rather than address Sun's behavior, Judge Jiang Yingwei instead warned the lawyers to not mention anything about the legality of Falun Gong.

Mr. Liao Ting was sentenced to 4 years in prison shortly after he was tried on April 19, 2016 for refusing to renounce Falun Gong.

He filed an appeal to the Luzhou City Intermediate Court, which held a hearing on September 27.

Mr. Liao and his two lawyers reiterated his constitutional right to freedom of belief, as no law in China criminalizes Falun Gong. The judge adjourned the appeal hearing without issuing a decision.

Many of the practitioners also had their homes ransacked by the police and valuables taken.

Mr. Zhao Chengyao and his mother, Ms. Cheng Shuxiang, were arrested at night on July 2, 2014. Mr. Zhao has been detained in the Jinan Detention Center for more than 27 months. His case was heard multiple times. He was recently sentenced to 3.5 years in prison.

Ms. Zhang Lixue from Chengdu and Ms. Gan Xuemei from Dujiangyan were arrested on March 3, 2016 for distributing informational materials about Falun Gong. They have been held in the Youai Town Detention Center.

Ms. Zhang was tortured both mentally and physically in detention. Her mental state has diminished as a result. Her persecution case has drawn attention from U.S. Congress members and was mentioned in a letter drafted by Member of Congress Dave Reichert and co-signed by five other members of congress. The letter was sent to the office of Chinese President Xi Jinping in June 2016.

Ms. Qiu Xiaomin was arrested on April 28, 2016 and has been detained in the Jing’an Detention Center for more than 5 months. The Jingan Procuratorate sent her case to the Chabei District Court in September. Ms. Qiu is facing trial.

Her family met with many obstacles and hired lawyers four times for her case. Her lawyer went to the Procuratorate and requested to read her case file on August 4. The Procuratorate created many difficulties, and the lawyer was not given access to her file.