(Minghui.org) Today's news from China includes incidents of persecution that took place in 9 cities or counties in 7 provinces. According to this report, 4 Falun Gong practitioners were subjected to mistreatment during their detention, and at least 15 were illegally arrested. 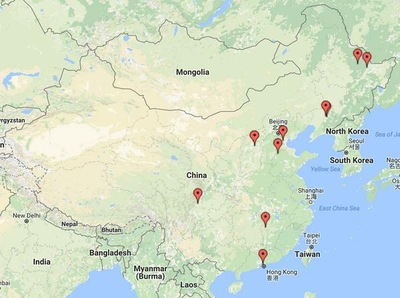 Ms. Chen Yanyu of Dongzhou District, in her middle 40s, disappeared after she left home on September 15, 2016. Her family learned upon inquiry that she was held in the Nangou Detention Center. They tried to pick her up on the scheduled release date, September 30, but could not find her. Her whereabouts are unknown.

Mr. Hao Lizhong and Ms. Zhao Jing from the Shuncheng District were tried on the morning of October 14, 2016 in Shuncheng Hall, Fushun City Detention Center.

Mr. Tan Fengjiang of the Wuying District was working in Harbin City. He was arrested in a Harbin Bank and is being held in the Youhao Detention Center.

Mr. Huang Shisheng's whereabouts has been unknown since he was arrested by three officers at the Hegang Railway Station on September 7, 2016. One of the officers was Ji Jianjun, from the Gongnong Police Department Domestic Security Division.

Mr. Huang and his niece's daughter were waiting for a train. His niece, Ms. Huang Xiaoxia, was imprisoned in Harbin Prison for practicing Falun Gong. They were going to visit her and practitioner Mr. Xu Xianda, who is imprisoned in Hulan Prison.

Mr. Lei Zaiqing was arrested on the morning of September 30, 2016, by officers from the Majie Police Station, for distributing Falun Gong informational materials in Majie, Pi County. He was released the next day.

Ms. Wang Shumin of Taitou Village, Gaochun Township, Wuqing District was arrested at home by officers from the Gaochun Township Police Station on October 2, 2016. She is held in the Wuqing Detention Center.

Ms. Wu Xiaojiao of Yizhou City and five practitioners from Zhangjiakou City, Hebei Province were arrested on the evening of October 5, 2016, for hanging posters which exposed the persecution of Falun Gong.

Officer Li Linshuang and others ransacked Ms. Wu's home the next day and confiscated her printer, hot melt machine, and several Falun Gong book covers. The practitioners are held in the Yizhou City Police Department.