Practitioners shared their stories of improving themselves by looking inside to discover their shortcomings and then working to eliminate them. A common theme at Falun Dafa conferences held elsewhere around the world was repeated by attendees here: Studying the teachings well, and measuring one's thoughts, words and actions with them, are fundamental to advancing in the practice. 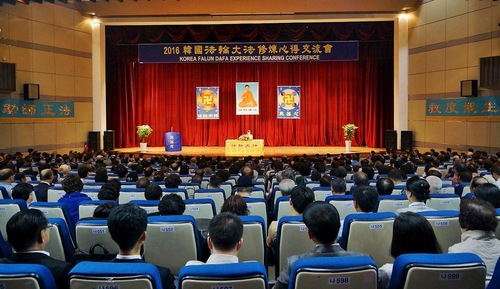 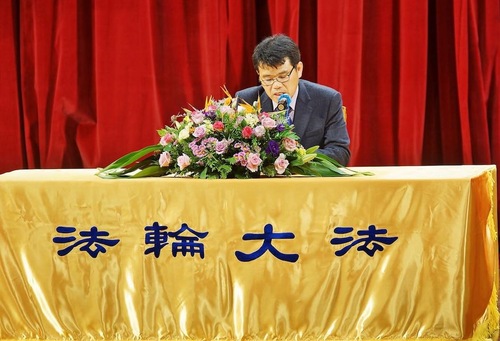 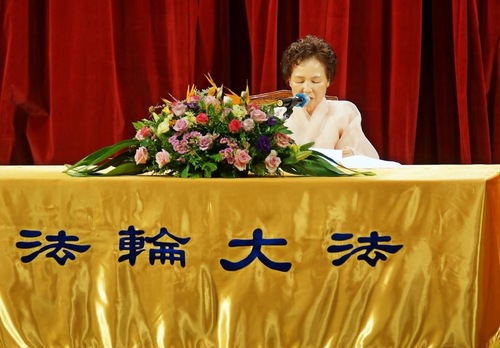 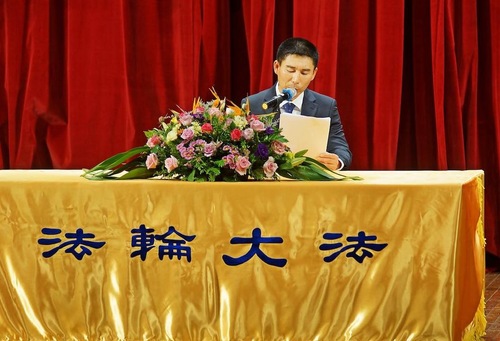 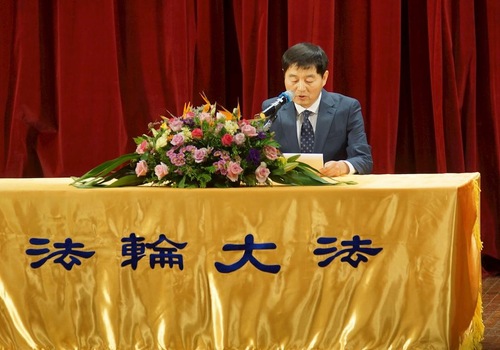 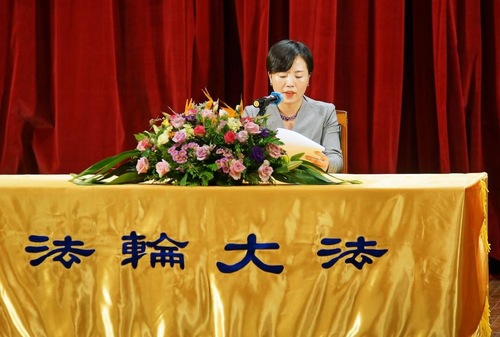 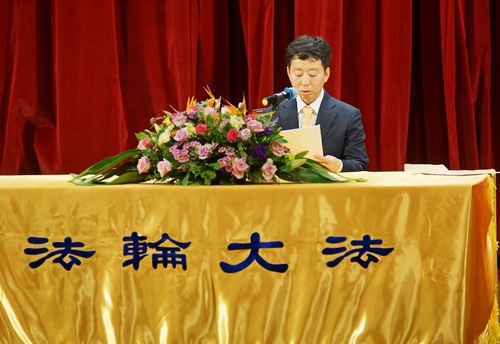 Believe in Master and the Teachings

Ms. Lin, a practitioner from the city of Suwon, explained how she had been very busy doing things for Falun Dafa over the past 12 years, but that she didn’t do well in cultivation while doing them. Two years ago she began to have all types of evil and filthy thoughts in her head that led her to great distress. She realized that this was thought karma, and that it was the result of her not cultivating steadfastly and not letting go of many attachments over the years.

She began to study the teachings and found that her fundamental attachment was to comfort. She also discovered that for everything she did, she wanted the satisfaction of being praised and approved by other practitioners. She has always been proving herself instead of validating the teachings.

When she was troubled by her thought karma, all she could think of was that she could lose praise and approval as a result. She realized that she was being interfered with because she has always been selfish. She knew that she had to take the time to study the teachings seriously.

Ms. Zheng, 73, from Changwon City, has never thought of giving up the practice despite her husband's strong objections. She started an outdoor group exercise session and attended every day. Many times she was the only one there. She wasn't discouraged for she knew that Master and other divine beings were always with her. She wanted to show the people who walked by her every day how steadfast Falun Dafa practitioners were.

She was able to eliminate her feelings of low self worth because of the practice. As she looked for the root of her lack of self esteem, she saw that it came from her attachment to competition and jealousy. Each time she hosted an art exhibition, she always wanted to stand in the back and let the young practitioners talk, feeling that they could speak more eloquently about Falun Dafa and the persecution.

She was once the only one who was available and had to explain the facts about the persecution to a young man. She tried her best and the man thanked her. Other practitioners told her that her words were very powerful and moving.

She realized that the most important thing in speaking to people about Falun Dafa isn't being eloquent, but being sincere. As long as she truly wants to help a person, Master will give her the ability to do so.

At one point she realized that her husband's objections to her practice resulted from her many human notions. She stopped complaining about her husband and began to focus on doing Dafa work well.

As she let go of her notions, her husband's attitude slowly changed. In 2013 he bought 30 tickets to Shen Yun and sold them to his coworkers. He also accepted the fact that she wants to travel overseas to attend Falun Dafa conferences every now and then.

Mr. Zheng from Seoul attended training sessions to promote Shen Yun. He came to understand that the number of posters put up doesn't matter. Rather, it is the impression that he gives to others that counts. People in South Korea pay a lot of attention to how they look. Hence he needed to appropriately dress. He learned he needed to know more about Shen Yun so he could be more confident when he promotes the show. Master says,

“...if this is something you want to do, you definitely need to do it well—otherwise don’t do it.” (“Fa Teaching Given at the 2010 New York Fa Conference”)

He began to study the teachings and send righteous thoughts before going out to promote Shen Yun. He stopped by every store, restaurant, bank and school on his route. If a place didn't allow posters, he would give people fliers and introduce the show to them.

In the process, many people told him that the performance looked beautiful and some even purchased tickets right then.

He was able to see his weaknesses in the process, especially his jealousy. He wanted to know who had put up more posters than he did. He liked to look at pretty girls on the street and wanted to show off in front of them. He would lie about things he didn’t do.

As he slowly eliminated his attachments and notions, he became more tolerant. He wasn't easily distracted by other people's negative comments and stopped paying attention to women. As he improved himself, almost everywhere he went, people welcome him to put up the posters.

He is a member of the Tian Guo Matching Band. He recites the article “Tian Guo Marching Band” before each performance. The article reminds him that he must be focused and eliminate random thoughts while performing. This way he is able to focus on awakening people and feels strong energy when he performs this way.

Ms. Quan has had her ups and downs in the practice these past 20 years. She was once discouraged and doubted the practice but was able to strengthen her faith and stay with it. She learned her lessons and is grateful.

Marketing for a media company as a practitioner, she realizes that she must help people understand the benefits of working with and supporting the media. Talking to people about Falun Dafa is crucial. In the process, she has let go of her irritability, impatience, and competitiveness.

When she learned that she didn't get a particular account, she was able to stay calm and kind. She still treated the customer to dinner. She knew that at least he understood the truth about the persecution. She let things go and felt good about being able to tell him the facts about Falun Dafa.

The next day he called her back and told her that the account had been approved. She knew that Master arranged for her to meet this person. As long as she kept her righteous thoughts, she was in good hands.

From then on, she worked even harder in marketing the media. She studied one chapter of Zhuan Falun each day. When she met with clients, she only focused on making sure that person understood the facts about Falun Dafa.

She called the practitioner to speak to her about it and came to realize that the practitioner had no intention of taking credit from her, and was calm and rational explaining things to her. Ms. Quan recognized that she had to look within to discover why the incident had upset her.

She found that she was selfish and jealous and always expects something in return. She wanted others' approval and was somewhat vain. She wanted to be better than others and felt hurt when she wasn't given the chance.

She worked on eliminating these notions while she studied the teachings, and soon got along better with the other practitioner and her clients as well.