(Minghui.org) Falun Gong practitioners gathered in Canberra, Australia from October 10 to 13, 2016 to raise awareness about the Chinese Communist Party's persecution of Falun Gong. As the Australian Parliament was in session, practitioners held activities in front of Parliament, as well as downtown and tourist sites.

Some practitioners visited communities, medical centers, and churches to raise awareness about the CCP's state-sanctioned organ harvesting from living Falun Gong practitioners in China. Many expressed their support for the practitioners' efforts to end the atrocity. 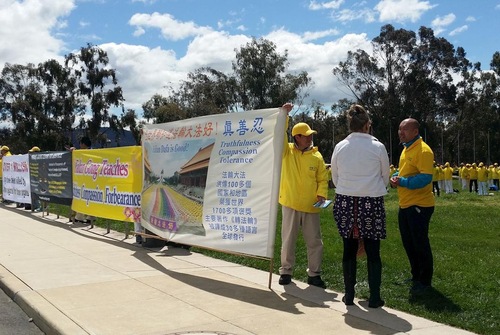 A Parliament staff member learns about Falun Gong and the persecution in China. 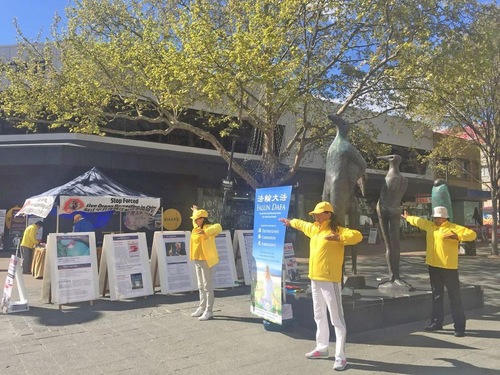 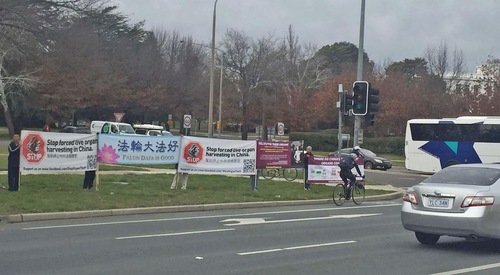 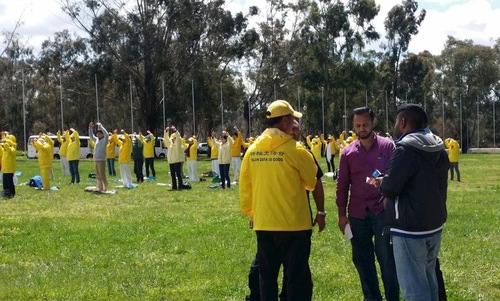 A group of practitioners went to the Canberra Flower Festival to demonstrate the exercises on the morning of October 10. A security guard named John said, “Just being near your group doing the exercises makes me feel great! I called a media outlet to encourage them to cover your event.”

Grace, who works in the parliament building, said, “I saw your large banners on my way to work. I support you.”

Dr. Quoy, a dentist at Ainslie Dental Care, signed the practitioners' petition against the CCP's live organ harvesting. The petition was addressed to Prime Minister Malcolm Turnbull, Foreign Affairs Minister Julie Bishop and opposition leader Bill Shorten. The letter called on all members of Parliament to pass a resolution urging the CCP to stop the persecution and live organ harvesting immediately.

Hege, a reporter of The Seven Network in Parliament signed the petition. He said he would try his best to spread the news.

“Illness Symptoms Vanish Upon My First Reading of “Zhuan Falun””

“A Suggestion for the Wording of Parade Banners”