(Minghui.org) Berlingske, one of the largest newspapers in Denmark, published two full-page articles on October 12, 2016, revealing the state-sanctioned organ harvesting from prisoners of conscience in China.

The articles were titled, “When political prisoners are killed to order” (Når politiske fanger bliver dræbt på bestilling) and “Members of religious movement used as organ storage” (Medlemmer af religiøs bevægelse bruges som organ-lager). The two articles were based on interviews with Canadian human rights lawyer David Matas during his trip to Denmark. 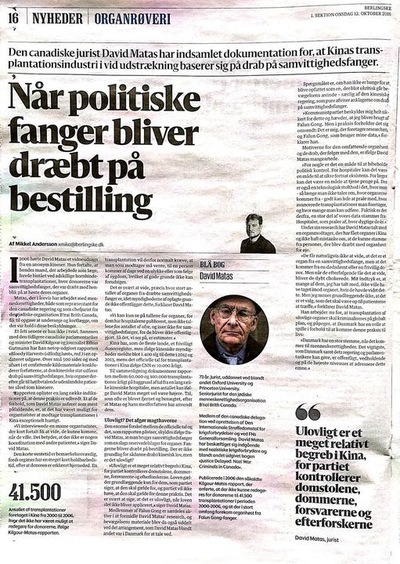 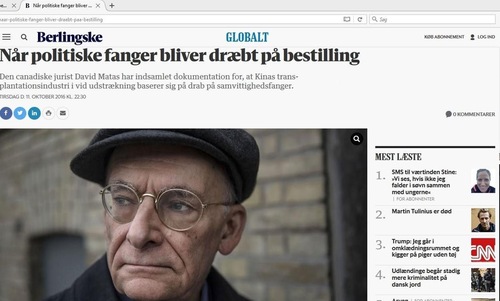 The author of the articles, Mikkel Andersson, introduced in great detail the results of the 10-year long independent investigation on forced organ harvesting by David Matas and former Canadian diplomat David Kilgour. The articles also highlighted the new report, Bloody Harvest/The Slaughter: An Update, based on the collaborative investigation by Matas, Kilgour, and independent reporter Ethan Gutmann.

The first article focused on the scale and evidence of the state-sanctioned organ harvesting.

In the updated report, three investigators concluded that the Chinese government is carrying out the killing of prisoners of conscience, whose organs are sold at high prices to foreign patients as well as Chinese.

The report lists a variety of evidence. One of the most striking is how quickly organ tourists can receive transplants in China.

David Matas told Mikkel Andersson, “We interviewed a lot of organ tourists, who were told [by the hospitals] that they could come whenever they liked. This means that there is no coordination with other patients.”

Andersson wrote, “The short wait is remarkable because organs have a very short shelf life after the donor is declared brain dead. A transplant will normally require a receiver to wait for someone to pass away in an accident or as a result of illness, which for good reason can not be predicted.”

Huge Difference Between the Numbers

“It's hard to know exactly how many organs are available from dead prisoners of conscience, as authorities for obvious reasons do not publish this.”

The article says that China has a voluntary donor register, but according to Chinese authorities, only 1,400 donors registered in 2012 and 2013, while the official figure for transplants in China, according to CNN, is 10,000 annually.

Matas pointed out that the huge difference between the official figures and donors comes from the prisoners of conscience. “The prisoners are killed to order,” the article says.

The second article focuses on the largest groups of victims—Falun Gong practitioners.

The article says in the first paragraph, “In China there is a state-sanctioned and extremely widespread practice that turns doctors into executioners. Tens of thousands of people per year are killed for the purpose of organ transplantation, and the majority come from Falun Gong.”

The author briefly introduced Falun Gong as a traditional Chinese meditation practice, which was very, very popular before the persecution of the practice started in 1999.

During the persecution, many practitioners were arrested. Many of the detainees refuse to reveal their identities, for fear that their families will be held responsible by the government.

The article states, “This means that the authorities do not know who the detainees are, and that family and friends do not have the opportunity to know where they are detained.

“This means that these prisoners are particularly vulnerable, even by Chinese standards. The report concludes that a large number are killed to order when there is a need for transplantation organs, both for Chinese patients and organ tourists.”

Making the Crimes Illegal at a Global Level

Matas told the author of the articles that many organ recipients did not know where the organs came from.

“But when told, they were deeply shocked. My impression is that many of those I have spoken to would not have accepted the organ if they had known this,” Matas said.

Matas now works on criminalizing the transplantation of illegal organs at a global level.

At the end of the first article, Matas points out the important role that Denmark can play, “Denmark has a great voice when it comes to human rights. The main thing that the Danish government and parliamentarians can do is to persistently and publicly address this issue at the highest levels.”