(Minghui.org) Over the past 17 years, Falun Gong practitioners in China have been subjected to numerous methods of torture while illegally incarcerated in prisons, forced labor camps, detention centers, brainwashing centers, and psychiatric hospitals. Hanging heavy objects around the neck is among the most used torture methods. 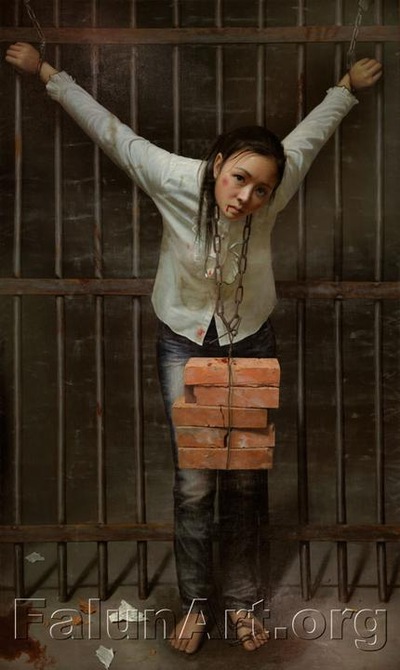 Mr. Ma Zhiwu, 46, a resident of Yingchuan City, Ningxia Autonomous Region, was sentenced to six years in prison in 2002. While serving his term in the Maguanhu Prison, he was hung up in the workshop during work hours.

Prison guard Liang Haiwan ordered inmates to beat him with belts and batons, shocked him with electric batons, and hung a box filled with bricks around his neck. A bag of sand was put on top of his neck. Mr. Ma had to endure this abuse every day for two months.

Mr. Liu Qingshui, a practitioner from Wuhan City, Hubei Province, was taken to Fanjiatai Prison on June 29, 2004. He protested the illegality of his imprisonment on August 18, 2004, and refused to do forced labor in the brick factory.

Guard Xiao Tianbo ordered inmates to hang a sign and a steel wire with bricks tied at each end around his neck. The wire cut into his flesh. He was beaten and had his ribs broken when he refused to give in to their demands.

Mr. Liu Peng, a teacher, was detained in the Shanghai First Forced Labor Camp from May 2000 to February 2002.

He was forced to stand in a half-squatting position while holding a basin full of water. A toilet bucket about one and a half feet high was placed right in front of him. A guard hung the bucket using a steel wire around his neck.

Mr. Zhang Guoliang from Hubei Province was taken to Qiquankou Prison in July 2001. Shortly after he arrived, guards ordered inmates to hang a bucket filled with water on a thin nylon rope around his neck. When any water was spilled, Mr. Zhang was beaten.

Since he refused to renounce Falun Gong, he was tortured the same way the next evening.

Another practitioner was tortured at the same time. The inmates forced this practitioner to lean his head on Mr. Zhang's water bucket. The session lasted half an hour.

Afterward, Mr. Zhang was unable to lift his head for an entire month.

Practitioner Wang Guangyang from E'zhou City was taken to the same prison in April 2004 and subjected to the same abuse, which left marks on his neck still visible today.

Mr. Zheng Zhiqiang, a practitioner from Dandong City, Liaoning Province, was tortured in Nanguanling Prison in Dalian City in the beginning of 2004. He was forced to stand in the snow from 6:00 p.m. to 7:00 p.m. each day. A wooden plate weighing about 35 pounds was hung around his neck. This lasted 17 days. He was tortured to death on April 4, 2004, at the age of 37.

Mr. Feng Feng from Jingzhou City, Hubei Province was sentenced in 2008 to eight years in Fanjiatan Prison. On June 29, 2012, he was hung up by handcuffs. Two heavy wooden blocks were hung around his neck. He was left in this position for the entire night. Because of the resulting shoulder injuries, he still cannot perform any heavy labor.

Mr. Zhang Chunqiu from Hunan Province was sentenced to eight years in Jin City Prison in 2001. On May 17, he was hung up with two hands behind his back and his feet above the ground. A wooden block, soaked in water and weighing about 160 pounds, was hung on a steel wire around his neck for more than 13 hours.

“Trial of Tianjin Woman for Her Faith Postponed Again”