(Minghui.org) Today's news from China includes incidents of persecution that took place in 12 cities or counties in 9 provinces. According to this report, 8 Falun Gong practitioners were subjected to mistreatment during their detention, and at least 10 were illegally arrested. 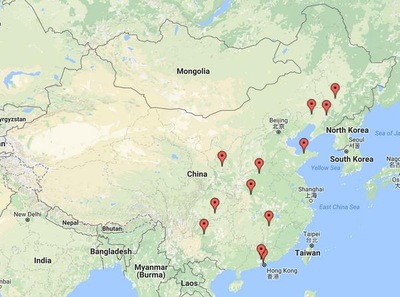 Ms. Yao Rumei, 69, was reported for distributing Falun Gong informational materials on September 3, 2016. She was arrested by officers from the nearby police station. She is held in the Jingyue Detention Center.

Family visits have been denied. Her family was notified that the arrest of Ms. Yao was approved. The officers found her address over an online system. They ransacked her home and confiscated Falun Gong books.

Mr. Zou Shuwen was arrested at home by officers from the Qingxia Police Station on September 25, 2016. The officers confiscated Falun Gong informational materials, a computer, a printer, and other personal belongings. Mr. Zou's family went to the Qingxi Police Department to demand his release. They were told that he had been transferred to the Sanzhong Police Station, Qingxi Town.

Mr. Feng Shaoyong was arrested by officers from the Longgang Police Department on the evening of September 24, 2016.

Mr. Ah-Cong was arrested at his sister's home on the same day.

Ms. Li Qinglian was sentenced to two years in prison on May 31, 2016 by the Yushui District Court. She appealed, but the Intermediate Court upheld the original sentence without a court hearing. She was taken to the Nanchang Women's Prison around September 20, 2016.

She was arrested on August 26, 2015, for suing Jiang Zemin, the former head of the communist regime, who initiated the persecution of Falun Gong. She was held in the Xinyu Detention Center.

Mr. Li Changsong, in his 70s, from Sanguan Village, Guangwu Town, was reported for talking to people about Falun Gong on September 9, 2016. He was arrested by officers from the Guangwu Police Station. His electric car was confiscated. He has been held in the Sanlizhuang Detention Center for over two weeks.

Ms. Chen Wenying, in her 70s, from Fancheng District, was dragged downstairs from the sixth floor, in an upside-down position, by officers from the Fancheng District Domestic Security Division on the morning of September 23, 2016. She was pushed into a black car and taken to the Shipu Police Station where she was held for several hours. It was not until she felt severe dizziness and had difficulty walking that she was released.

Personnel of the Xiaojin Town Judicial Office and officials from various villages went to practitioners' homes to harass them on September 7, 2016. They asked each practitioner to sign a guarantee statement to renounce Falun Gong. They also took pictures of practitioners with cell phones without consent.

Mr. Li Qi from Liuji Special Zone was arrested for talking to people about Falun Gong and distributing Falun Gong informational materials on the morning of September 18, 2016. He was given a 15-day detention and was held in a local detention center.

Ms. Cai Wei, about 60, from Wanghua District, was arrested on the afternoon of September 23, 2016. She was taken to a detention center.

Ms. Wu Guiqin from Changyingzi Town went to send righteous thoughts near the Fumeng County Detention Center on September 19, 2016. She was arrested and is being held in the Xindi Detention Center.

Mr. Liu Chenggao from Shapingba District was arrested on the morning of September 20, 2016. He was taken to the Qianzhugou Brainwashing Center in the Geleshan area.

“Paris: Speaking Out Against Forced Organ Harvesting in China”