(Minghui.org) Mr. Xiong Huifeng, a 78-year-old retired space scientist, was sentenced to seven-and-a-half years by the Nankai District Court in Tianjin, China on December 4, 2015. How could a celebrated scientist, nearly 80 years old, receive such a prison sentence? Simply for exercising his constitutional right to practice his belief – in Mr. Xiong's case, the traditional cultivation practice of Falun Gong. Mr. Xiong lodged an appeal immediately following the verdict.

Since the court did not send any notification to Mr. Xiong's family members, the family didn't know the results of the trial until his lawyer contacted them 11 days later. On December 28, the family requested the verdict from the court. They were rejected at first and only received the verdict after repeated appeals.

Xiong Huifeng was a former researcher and deputy director of the 8358 Research Institute of the Ministry of Space Industry. He was also a director on the board of the Chinese Society of Astronautics and enjoyed a special government allowance reserved for the best scientists in the nation. 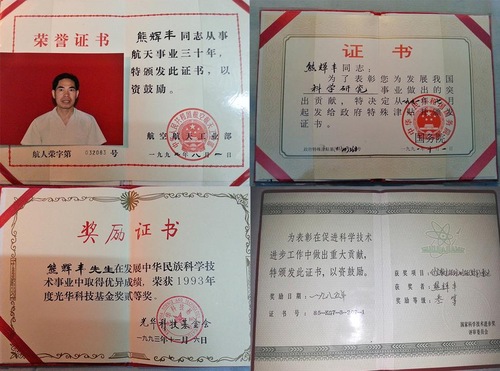 Award certificates issued to Xiong Huifeng for his contribution to the space industry.

Mr. Xiong began practicing Falun Gong in 1995 to improve his health and cultivate his spirit. Soon after he took up the practice, he started to make donations to the China Youth Development Foundation, and sponsored more than 20 elementary school students in two provinces.

After Xiong Huifeng was arrested last year, his family members found 25 letters of thanks in his drawer. The letters were from children, parents, and schools, expressing heartfelt thanks for his generosity. Xiong never mentioned his acts of kindness to anyone, not even to his family. 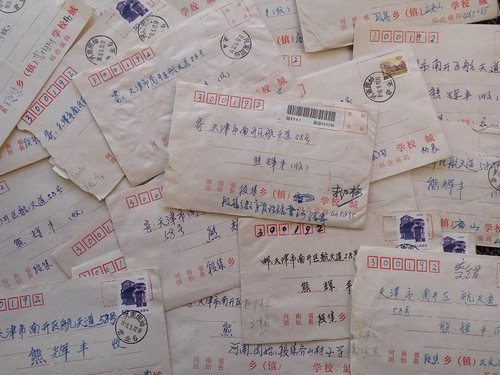 After the persecution of Falun Gong began, Xiong Huifeng was put in a forced labor camp for three years in 2000 because he refused to stop practicing Falun Gong. During his imprisonment, officers from the Wangdingti Police Station frequently harassed his family.

Mr. Xiong's wife and son were taken to a brainwashing center in 2001. The couple was arrested again in 2008 before the Beijing Olympics.

In August 2014, Xiong Huifeng was arrested at home by officers from the Wangdingti Police Station and the Nankai Police Department. The officers confiscated his laptop computer, printer, DVD burner, Falun Gong books, and informational materials about Falun Gong. This was the fourth arrest for Xiong since the persecution began in 1999.

Years of police harassment, multiple arrests, and home searches had taken a toll on Mr. Xiong's wife, Liu Yuanjie, also an award-winning space scientist. After her husband's last arrest she suffered a mental breakdown and her health began to deteriorate. She died at the age of 79 on March 3, 2015. Mr. Xiong Huifeng was not allowed to see his wife before her death.

After being held for a year, Mr. Xiong had his first trial in August 2015. He pointed out to the court that practicing Falun Gong does not break any Chinese law. His lawyer pled innocent on his behalf, citing how the practice of Falun Gong benefits individuals and society.

On November 25, 2015, the Nankai District Court held a second trial for Mr. Xiong. The court did not inform the lawyer until the day before the trial, so that the lawyer was not able to inform Xiong's family about the court date.

The trial ended in less than 20 minutes. Two weeks later, the verdict was sent to the detention center where Xiong Huifeng was imprisoned.

“Over 300 Falun Gong Practitioners from Hanzhong City, Shaanxi Province Sue Jiang Zemin between Late May and End of December”

“New Hope for a Mother and Her Young Son”