(Minghui.org) Today's news from China includes incidents of persecution that took place in 12 cities or counties in 7 provinces. According to this report, 6 Falun Gong practitioners were subjected to mistreatment during their detention, and at least 10 practitioners were illegally arrested. 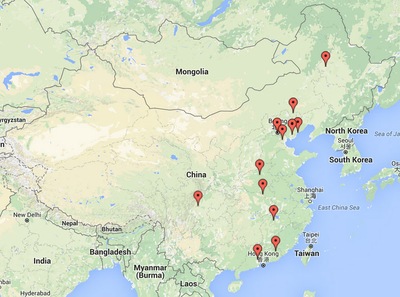 Ms. Rao Shunqin was tried on September 14, 2015, in the Shihe District Court. The verdict handed down on December 12 sentenced her to three years in prison. She has appealed.

Ru Zhongxi and other officers from the Qinhuangdao Development Zone Domestic Secretary Division broke into Ms. Li Haiying's home and arrested her on the morning of December 8, 2015. They confiscated all her Falun Dafa books and photos of the founder of Falun Gong. Ms. Li is now in the Qinhuangdao Detention Center.

Approximately 12 officers from the Haizhu District Domestic Secretary Division and residential police officers tricked Ms. Dong Lijuan into opening her door on the morning of December 3, 2015. They forced their way in and ransacked the place. They confiscated Falun Dafa books and audio and video DVDs, two photos of the founder of Falun Gong, a computer, two cell phones, a radio, and her shoes. Ms. Dong was held in the Changgang Police Station for interrogation until midnight and then taken home.

Ms. Dong was carried downstairs from her home by officers the following afternoon. The officers twisted her arms when they pushed her into a police vehicle. She was taken to the police station. The officers photographed her, verified her fingerprints, and tested her saliva. She was released at 8 p.m. that night.

Ms. Liu Fenglian, Ms. Qi Baiqin, and Ms. Yang Shujun from the Fularji District were arrested. Eyewitnesses reported that the officers from the Beixing Police Station confiscated several Falun Dafa books from Ms. Liu's home. She has been held in the Qiqihar No. 1 Detention Center for over 20 days. Ms. Qi and Ms. Yang have been detained for about a week.

According to Mr. Liao's family, officers from the Chengdu Police Department went to Mr. Liao's father's work unit to harass him. They played propaganda tapes that slandered Falun Gong and practitioners. A notification was issued placing Mr. Liao under criminal detention in the Pi County Detention Center. When his family sent clothes to the detention center, however, the reception staff told them that there was no one there by that name. Mr. Liao's whereabouts are unknown.

A female practitioner about 40 years old was arrested by security guards when she was distributing Falun Gong informational materials in the Nanchang City Square at noon on November 8, 2015.

Ms. Sun Guizhi, in her 60s, from the Hexi District was arrested by officers from Taoyuancun Police Station in the Hexi District on December 6, 2015. She is being held in the Caozhuangzi Detention Center in the Xiqing District.

Officers from the Ciyutuo Town Police Station led by Song Liangqing, a village Party secretary, ransacked Ms. Zhao Xiuying's home on December 11, 2015, on the grounds that she filed a lawsuit against Jiang Zemin. They confiscated Falun Gong informational calendars and lawsuit documents.

The officers confiscated Falun Gong materials. They left the couple, who are in their 70s, on the road between their home and the police department. They had to walk home. Mr. Wu's whereabouts are unknown.