Doctor of Bioengineering: Being a Cultivator Makes Me Very Happy

(Minghui.org) Fengtao is a Falun Dafa practitioner and successful Vietnamese scientist who holds a doctorate in bioengineering. He's a research institute manager for a multi-national corporation. 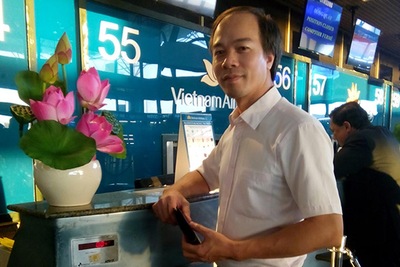 Fengtao had thought about the meaning of life since he was young. He read a lot of books searching for answers, but didn't gain much from them.

After earning his bachelor's degree, Fengtao went to graduate school in France and was kept busy with research and lab experiments. Some of his experiments were successes, but many failed. His unsuccessful experiments caused him to reflect on the meaning of success. He believed that fate is what dictates the outcome in life, rather than one's talent. So he wondered if there was any way to change one's fate.

A friend introduced Falun Dafa to Fengtao. He read Zhuan Falun online in one sitting. The book not only answered his questions about life, but changed his outlook of the world.

Cultivators Are the Happiest People

Fengtao said, “Cultivators are the happiest people because they know what they need to do to make their life fulfilling. It made my life flow naturally and become peaceful.” He believes that people's desires for food, money and concerns about health make life tiresome. Since Falun Dafa cultivators are able to take these things lightly, it makes them the happiest people.

The principles Fengtao found in Zhuan Falun helped him improve his work environment. Since Fengtao is a manager, he is always busy and has a lot of pressure at work. He's able to deal with situations more calmly using the principles of Truthfulness-Compassion-Forbearance to determine how he should act. As a result, his job has become easier, and his colleagues have also noticed a change in him as well.

Fengtao said, “The standard of morality is getting lower and lower, because everyone is afraid of losing personal interests. But if people could truly understand the causes of problems, reincarnation, and loss and gain, they would be able to resolve any conflict and simplify things.”

Fengtao realized that his job requires more than experience, creativity and hard work; wisdom and the ability to harmonize work relationships also play a big role.

Falun Dafa also harmonized Fengtao's family life and brought him good health. He used to suffer from a chronic sinus infection and a spinal disease. They vanished after he started to practice Falun Dafa.

Working to End the Persecution

Fengtao admires Falun Gong practitioners in China for their perseverance and compassion when facing the Communist Party's brutal persecution and slander. He tries his best to tell people about the benefits of Falun Dafa and to raise awareness of the persecution.

Fengtao once noticed that a group of Chinese tourists were lost in the airport. Even though he could only speak a few words of Chinese, he managed to lead them to their boarding gate and gave them Falun Dafa flyers. The Chinese tourists were very thankful and accepted the flyers happily. Fengtao was touched by Master's arrangement to meet them.

From then on, whenever he hesitated about handing out Falun Dafa flyers, he would remind himself that Master had to make careful arrangements for people to have a chance to learn about Dafa. He couldn't miss the chance they had been waiting for.

“2015 Year in Review: Peaceful Resistance and Contributions to Society”

“Keeping a High Moral Standard on the Cultivation Path”