(Minghui.org) “Ever since I was young, people told me if someone slaps you on the left cheek, you should also turn your right cheek to that person. But I did not understand why. The Falun Dafa nine-day seminar explained everything,” said Begitter as she recalled the recent workshop held at the Tianti Bookstore in Manhattan, New York. 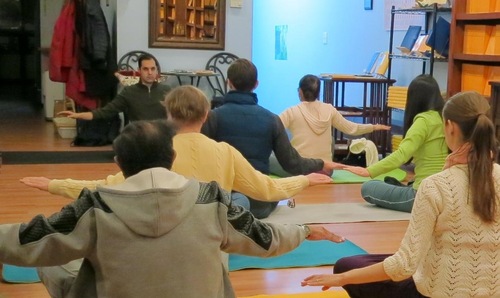 Learning the sitting meditation at the recent nine-day seminar at Tianti Bookstore in Manhattan. 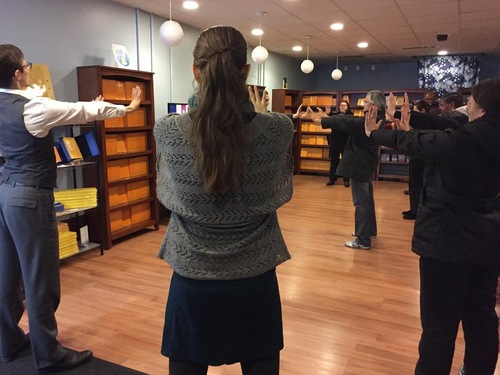 Coming from South America, Begitter, who was raised Catholic, had tried various types of meditation on her search for a spiritual path. Someone told her about Falun Dafa two years ago, but she simply filed the information away and did not pursue it at that time.

“But when I saw a notice for a nine-day seminar recently, I told myself not to miss it.” She bought a copy of Zhuan Falun, the main book of Falun Dafa's teachings in English before the seminar, and began to read it.

In the first two days of the seminar, however, Begitter felt sleepy and she could not understand parts of the lectures. “I also had difficulty reading the book. Nonetheless, I knew I should complete the session.” The situation improved starting on the fifth day: her mind became clearer and she suddenly could understand a lot more. Reading Zhuan Falun was also a pleasant experience and she found that the teachings were very profound.

“I now feel like I have understood more of the teachings, and I know the nine-day seminar was so important to me,” she explained.

In addition, Begitter also had some unusual experiences: she was able to see light or energy on others, and she saw things in other dimensions, too. Because of her introverted personality, she did not share this with others in the beginning. Upon hearing from other practitioners that such experiences are normal for many Falun Dafa practitioners, her concerns disappeared and she was very happy.

Quentin is a tall man who had practiced martial arts for many years. “One martial arts friend told me about Falun Dafa. I read Zhuan Falun and felt like my head was exploding with surprises—all the questions I'd had in the past were answered.”

This is the second time that Quentin attended a nine-day seminar. Living two hours from Manhattan, he always arrived one hour in advance to avoid being late. “Then, an interesting thing happened on the eighth day,” he shared.

Somehow on that day Quentin felt he needed to leave home one hour earlier than normal. He did that. But as the train passed the Jamaica subway station, there had been some accidents and all trains were stopped. People were stuck in the station and did not know what to do. It was chaotic.

“At that time, I heard a voice in my head saying, 'Walk to the front.' So I went to the front of the train car. The voice then told me to go one level below. I exited the train and went downstairs, and saw a train to Manhattan.” There were only three people on the train because most people did not know about it. Interestingly, this regular train changed to express after Quentin boarded. So he arrived in Manhattan on time after all, and was able to attend the seminar.

“As I thought it over, I could not explain it—it seems that all was arranged,” he said.

Another workshop attendee, Tatiana, also had similar feelings of amazement. Once a renowned dancer in the Soviet Union, she studied computer science after arriving in the U.S. and later worked as a teacher. “I have many accomplishments in my life, but somehow I still had questions about life itself,” she shared.

A resident at Tatiana's house heard her story and recommended a book named Zhuan Falun. From there, Tatiana found the information about Tianti Bookstore and the nine-day seminar.

“I learned a lot during this time,” she said. Her knees, which had been injured as a dancer many years ago, began to ache on the first day of the class. Yet from the lectures Tatiana came to understand that the pain was caused by karmic reasons, and she did not do anything to stop it. The pain subsided the next day and there was hardly any pain by the third day.

“Such pain has struck me many times in the past and it always lasted much longer than this,” Tatiana said with excitement. “I feel so good now. It's a real miracle!”