(Minghui.org) For Rita Sabbini who lives in the suburbs of Chicago, the brutality of communist regimes was not new information. Nonetheless, the continuing suppression of Falun Gong practitioners in China today, especially organ harvesting from detained practitioners, really shocked her.

“I know the Communist Party killed lots of innocent people, so many of them. This must stop,” said Ms. Sabbini as she signed a petition urging to bring Jiang Zemin to justice.

Jiang started to suppress Falun Gong in July 1999. Tens of millions of practitioners and their families have been negatively affected since then. In fact, more than 200,000 criminal complaints have been submitted to Chinese officials since last May aiming to hold Jiang responsible for his crimes.

This momentum also received broad support outside China. Over one million petitions have been collected in Asia alone. Ms. Sabbini's was one of 4,000 signatures that were recently mailed to the Supreme Procuratorate in Beijing and which were received on January 3. 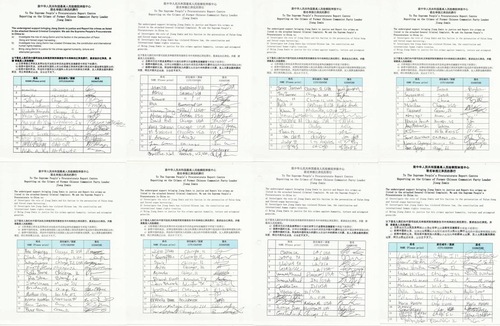 Some petitions collected in Chicago that were mailed to the Supreme Procuratorate in Beijing.

These petitions specifically requested the following from the Supreme Procuratorate:* Investigate the role of Jiang Zemin and his faction in the persecution of Falun Gong.* Investigate how Jiang Zemin has violated Chinese law, the constitution and international human rights treaties.* Bring Jiang Zemin to justice for his crimes against humanity, torture, and attempted genocide.

Laurie Turner, also from Chicago, said the atrocity was “outrageous”, “the suppression makes no sense at all.” Besides signing a petition, Turner said she would like to know more about Falun Gong exercises and read the teachings.

When a practitioner told a man at Chicago Union Station about the mistreatment Falun Gong practitioners had suffered for their belief, tears came to his eyes. He signed the petition and asked his wife to as well.