After entering the house, They broke Ms. Li's desk, ransacked her home and confiscated Falun Gong books and informational Falun Gong CDs. The police left the tools they used to break the door behind. 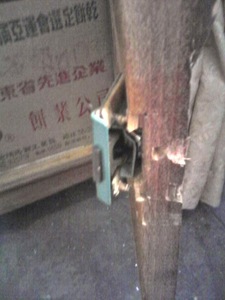 The police terrorized Ms. Li's daughter because she refused to open the door. They claimed that she “obstructed police business.”

Ms. Li's son was not spared either. They demanded that he guarantee in writing that he would force his mother to give up her belief. They threatened that if he did not cooperate, they would have him fired from his job.

Ms. Li was taken to a brainwashing center in 2006 because of her belief in Falun Gong. He blood was forcibly drawn in April 2014. The Guizhou Province Police Department ordered all Falun Gong practitioners in the area to take blood tests to build a DNA database, presumably so that they could serve as a living organ donation bank.

“My Whole Family Benefits from Dafa”

“Those Who Believe in “Truthfulness-Compassion-Forbearance” Are Blessed”