(Minghui.org) Twenty-five young Ride to Freedom cyclists crossed 13 states on their mission to raise awareness for and rescue five orphans in China. They left Los Angeles on June 1, 2015, and arrived in Washington D.C., the capital of the United States, on July 16, after biking 3,000 miles.

Through the Ride to Freedom event, these young cyclists called the world’s attention to the Chinese Communist Party’s persecution of Falun Gong, and the children orphaned due to their parents being tortured to death for practicing Falun Gong.

These young cyclists are all Falun Gong practitioners. They participated in this project because of their faith, perseverance in cultivation practice, and the hope that justice will be served.

“My classmates think that I’m quiet and introverted. If they knew that I biked across America, they’d be astonished,” said Falun Gong practitioner Jenny Zhi. “This journey was not easy, but we reached the goal of the journey.” 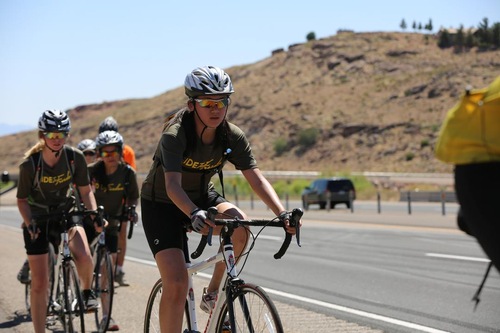 “The biking part was easier than expected. However our daily life was more difficult and inconvenient than I originally thought,” said Jenny, a young girl who was born and raised in Detroit, Michigan.

She continued, “We live in an air-conditioned house and eat well. However when on the road, even using a bathroom was an inconvenience. At night, I had to use a flashlight, and there were many bugs.”

Other than the inconveniences experienced on the road, there were also tests relating to personal cultivation improvement, also called xinxing or moral character improvement.

One of the tests the bikers, including Jenny, had to pass was how to be compassionate towards teammates.

One team member, because of his school schedule, joined the team on June 19. By this time, other members had three weeks of biking experience. She felt impatient when this team member, who was two years younger than her, took his time to get accustomed to the biking environment.

“If you can’t help out, then why did you join this project,” she asked him.

Other team member overheard her remark and advised her not to treat fellow practitioners like that.

A team member then said, “Think about it, our Master (the founder of Falun Gong) would never treat us like that. He would not say ‘if you cannot be diligent, why did you even cultivate?’ and give up on us.”

Jenny thought that this reasoning made sense, and thus began to be more considerate of her teammates.

She realized that he was after all two years younger. Of course, he would want to play more. Yet, he put a lot of heart into biking because he wanted to quickly catch up with everyone else’s pace. He was already trying very hard to do it.

She no longer criticized him. When she occasionally became impatient, she reminded herself of his strong points.

Another xinxing test involved overcoming challenges. Jenny fell off her bike in Kansas on June 22, and the injury was not small because she fell on a rocky road. A piece of rock pierced the skin of her leg.

“It hurt a lot. I was in shock at the moment and could not believe it at all,” she said. “I was not in a good mood that first day. I felt that I was trouble for everyone, because many of my teammates had to stop and take care of me.”

She admitted, “I felt that because I was wounded, I expected everyone to look after me.”

A day followed when the cyclists did not ride, but fixed their bikes and replenished whatever personal items they needed. Many teammates took care of her.

“Jenny, you should be able to take care of yourself,” said one team member. She agreed with her teammate and did not get upset for being made aware of the Falun Gong principle – Forbearance.

“You don’t have to take care of me. I can handle these things myself,” she told her teammates. She biked again four days later.

Talking About Falun Gong and the Persecution 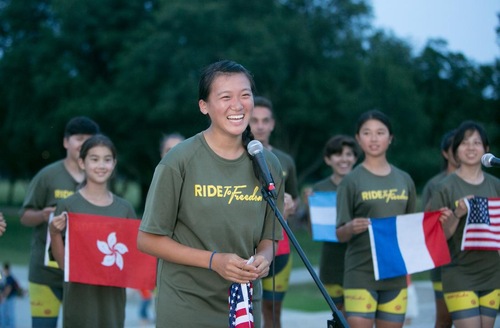 Jenny Zhi speaks at the rally at the Lincoln Memorial, Washington D.C.

Practitioners held a concert in front of the Lincoln Memorial, a U.S. national monument in Washington D.C., on July 7. They hoped that more people would learn the facts about the 16-year-long persecution. Jenny Zhi spoke at the event.

Telling others about the ongoing persecution in China, and the tragic stories about the orphans, which is what practitioners call Falun Gong “truth clarification,” was instrumental in Jenny changing from being introverted and shy, to more outgoing.

She said that before the Ride to Freedom project, she seldom talked to people about Falun Gong, because she was worried that people would think she was strange. During this trip, she talked about Falun Gong to almost everyone she came across.

She especially recalled her truth clarification efforts when the team stopped for two hours near downtown Chicago’s Magnificent Mile, a shopping center, to interact with people.

One after another, people took photos with practitioners, and gave them to the practitioners, showing their support for Falun Gong. Within two hours, the team collected 180 photos.

“Many people supported us. They also shared their point of view with us,” she said. 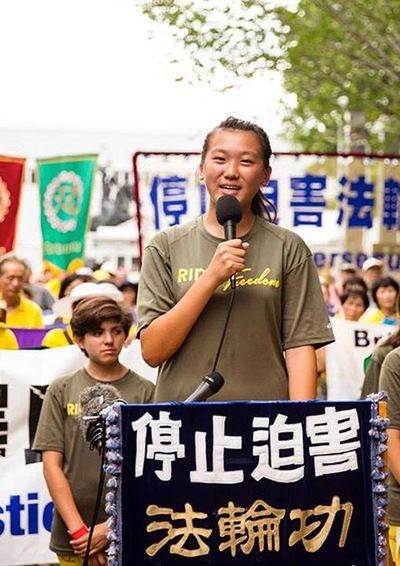 Rally outside the United Nations headquarters in New York

Falun Gong practitioners held a rally outside the United Nations headquarters in New York, on July 20, 2015. They called upon the international community to put an end to the Chinese Communist Party's (CCP) cruel persecution of Falun Gong. Jenny Zhi spoke at the rally.

Jenny will be in her second year of high school in September 2015, and will move on to college in 2016. She is interested in computers and art, and hopes to study graphic design or artificial intelligence.

As one of her high school projects, she was observing students who are Chinese descendants. She said that many “American-born Chinese” students want to distance themselves from their Chinese backgrounds, do not want to learn Chinese language, and do not care for China’s history and culture.

“I am different from them because I know for certain how glorious China’s traditional culture and history is. I really enjoy it. At times, they tell me, 'Jenny, you are so weird in this respect,' but I think this is one unique aspect of my life,” she said.

She was asked if her interest stemmed from the fact that she practices Falun Gong. “Of course,” she said.