(Minghui.org) Volunteer assistants from Falun Dafa exercise sites in Taiwan's Chiayi held a Fa-study and experience sharing session in August 2015. Many stories from the practitioners' journeys of cultivating Falun Dafa were shared during the event. The following are two examples of what practitioners shared. 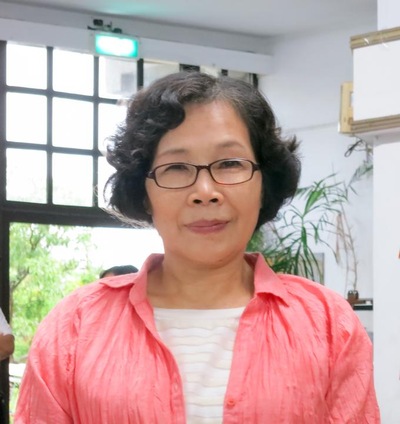 A practitioner named Yuhua operates a popular tea room at a tourist spot in Taitung. She practices the principles of Falun Dafa, Truthfulness-Compassion-Forbearance, while she runs her business and interacts with her staff. The tea room attracts many local people and tourists from mainland China. Yuhua takes every opportunity to tell the Mainland Chinese the real story behind the persecution of Falun Dafa, and helps them quit the communist organizations.

In 2009 Yuhua's husband fell in a tragic accident and died. Yuhua was devastated and struggled to get through her days. She had a nightmare one night that many people were being washed away by surging waves and she couldn't find her home. When she woke it dawned on her that cultivation is a serious matter, and lives can be easily lost given the huge amount of karma each life has accumulated. “How could a cultivator slack off?” she asked herself. Since the dream she has become diligent with her Fa study and put a lot of effort into improving her xinxing. Dafa helped her recover from the grief of losing her husband. She told fellow practitioners that, “We have to eliminate so much karma to return to our origin. The harder the test is, the more diligent we should be.”

She introduced Falun Dafa cultivation to all of her six children. Though some of them were rebellious at first, Yuhua followed the principles of Dafa and treated them compassionately and tolerantly. Her children, one after another, became Falun Dafa practitioners. They now all enjoy the positive environment of living in a family of cultivators.

Yuhua said, “Every test in our cultivation is carefully arranged by Master to teach us how to look inward and improve ourselves.” Every time a conflict occurs at home or at work, Yuhua studies the Fa, looks for her own faults, and tries to make improvements.

She recalled one time when her oldest son was upset because of some challenges he was facing. He wasn't polite to her. Yuhua forgot about compassion, and corrected him sternly. They started bickering and her son left home on his motorcycle. One of her other children told her, “Mom, we could tell that your demon nature took the upper hand over your Buddha nature just now. Our brother was sad, we should have been compassionate toward him.” Yuhua agreed. What her child said was right. She looked inward and found that she had been carried away by sentiment. After she realized where she had fallen short her son came home and apologized to her.

Another time Yuhua's feet started hurting very badly. She couldn't sit with her legs crossed. She started to ponder what she had done wrong. A memory of killing a chicken when she lived in countryside popped into her mind. She realized her karma had caused the pain. She felt fortunate to practice Falun Dafa and was determined to dissolve the karma by enduring the pain. She quickly felt better and was able to sit with her legs crossed.

Falun Dafa practitioner Mr. Cai had an 80-year-old relative called Acheng, who was riddled with prostate cancer. His condition didn't improve noticeably after surgery. He couldn't sleep, even with sleeping pills. And he had to use a diaper.

Mr. Cai and his wife told Acheng how Falun Dafa had benefited people with serious illnesses. Because Acheng was illiterate, Mr. Cai played Falun Dafa music to him. Acheng felt very comfortable while listening to the music. His insomnia dissipated. Acheng told Mr. Cai he would like to learn the Falun Dafa exercises. Mr. Cai and his wife played recordings of Master's lectures to him, and encouraged Acheng to join the group exercises.

A month after Acheng's surgery, his doctor recommended chemotherapy. Acheng knew he wouldn't survive chemo because of his age. He decided against it. He instead invested his time in doing the Falun Dafa exercises and listening to recordings of Master's lectures. Even though it was hard for him to sit with his legs crossed during meditation, Acheng with great determination managed to finish the daily exercises. His cancer symptoms gradually disappeared.

Besides Mr. Cai and his wife, assistants from two nearby group exercise sites also visited Acheng at home. They studied the Fa and did the exercises with him. They also taught him how to read characters from Zhuan Falun.

“Snapshot of Falun Gong Practitioners Whose Copies of Lawsuits Against Jiang Zemin Were Received by Minghui on August 27, 2015”