(Minghui.org) The 2015 Indonesia Falun Dafa Cultivation Experience Sharing Conference was held on September 26, 2015, on Bali Island. Seventeen practitioners shared how they benefited from Falun Dafa and improved their xinxing}. They also said that they talked to people about Falun Dafa and raised awareness of the ongoing persecution of Falun Gong in China. 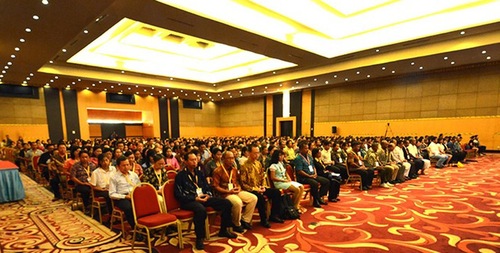 Ms. Dewi has gone to tourist sites regularly and talks to Chinese tourists. She makes a great effort to dispel misunderstandings about Falun Dafa. Chinese people hold much prejudice about Dafa because of the Chinese Communist Party's (CCP) propaganda and lies. She tells these tourists about the persecution of the practice by the CCP and encourages them to sever ties with the Party by renouncing their memberships in the Party and its affiliated organizations.

Mr. Bambang Looks Within and Tries to Improve

Mr. Bambang shared how he gradually learned not to blame or complain about others. He constantly looks within and tries to improve, especially when it comes to his mother-in-law finding fault with him. He also talked about his participation in {{clarifying the truth about Falun Dafa to government officials. He ensures that government officials receive the latest information about Dafa.

Mr. Jaya Putra grew up in an orphanage, and experienced a lot of discrimination. Because of his background, he had many questions, such as why people live, and for the meaning of life. He found the answers by studying Falun Dafa, and has practiced for close to ten years. He was involved in a car accident in April of this year. He looked within for attachments and realized that he had not let go of many attachments, including lust, anger, and the pursuit of fame and gain. He understands that the car accident was a warning. He now knows that he must cultivate diligently, abandon human attachments, assimilate to Dafa, and become a genuine cultivator.

Mr. Gede Sukarta shared how he changed from being a perfectionist who looked down upon others, to a person who is kind and considerate of others. He introduced the practice to his colleagues and studies the Falun Dafa books with them during their lunch breaks.

Mr. Umar, 62, has practiced Falun Dafa for five years. He had a heart problem, which disappeared after he began practicing. He was able to take things lightly when he lost the house that he had obtained through hard work. He has participated in peaceful protests outside the Chinese embassy in Jakarta during the past three years, calling for the CCP to stop the persecution of Falun Dafa. He said that he is now more tolerant and patient when facing conflicts. 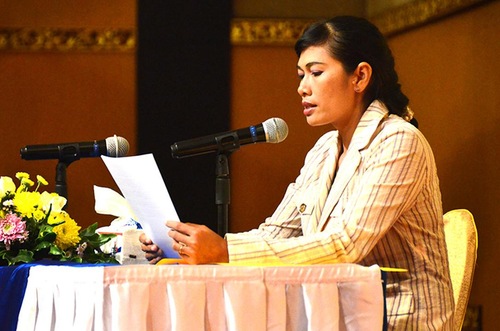 Ms. Etia is a 24-year-old university graduate. She said that she went to the nearest tourist site to help Chinese tourists quit the CCP at the end of her work day, where she met people with different attitudes. Some tourists cursed and made offensive remarks, which made her once want to stop clarifying the truth about the practice. But she heard a voice tell her, “You can't do that.” The voice awakened her righteous thoughts and her determination to fulfill her vows as a Fa-rectification Dafa Disciple.

Sugiyono is an 80 year old farmer. He talked about miraculous things he experienced after he began practicing Falun Dafa. He was once involved in a car accident and was thrown ten meters and survived. He also fell off a motorcycle, and had a coconut hit his head when it fell from the tree. Each time he was unscathed. He introduced Falun Dafa to local residents in the neighboring villages.

The couple Mr. Artawa and Ms. Armini came on the stage together. Armini talked about how she overcame sleepiness and laziness, and was able to get up at 5:00 a.m. to do the exercises with other practitioners. Mr. Artawa talked about his involvement in a signature drive. The petition called for an end to forced organ harvesting from living Falun Dafa practitioners in China. He goes to a vegetable market daily and tells the public how the CCP harvests organs from living practitioners, and that the atrocity must be stopped immediately.

The Fa conference concluded at 5:30 p.m.

“Hong Kong: Practitioners Wish Teacher a Happy Mid-Autumn Festival and Continue Their Efforts to Raise Awareness of the Persecution”