(Minghui.org) Falun Gong practitioners continued to call for visiting Chinese President Xi Jinping to bring Jiang Zemin, former head of the Chinese Communist Party (CCP), to justice during the 71st United Nations Summit in New York, on September 26, 2015. Jiang initiated the persecution of Falun Gong in 1999, flagrantly abusing his power to orchestrate the persecution in China.

Practitioners held large banners across from the UN Headquarters and the Waldorf Astoria Hotel, where Chinese President Xi Jinping is staying while attending the summit. The banners were worded, “Falun Dafa Is Good,” “Truthfulness-Compassion-Forbearance,” “Stop the Persecution of Falun Gong,” and “Bring Jiang Zemin to Justice.” 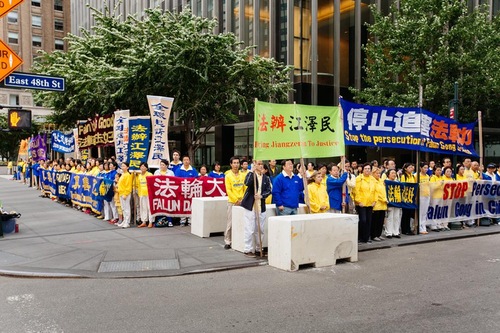 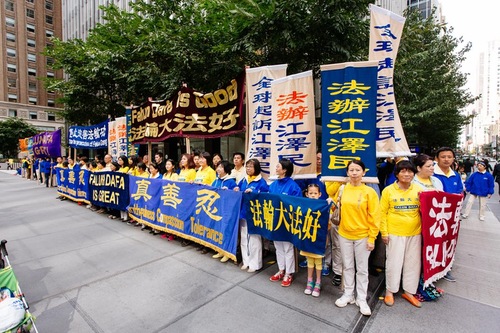 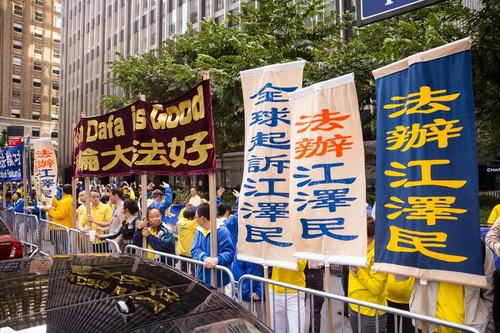 Falun Gong practitioners display banners calling for justice along the street near the Waldorf Hotel where Chinese President Xi Jinping is staying for the 71st UN Summit. 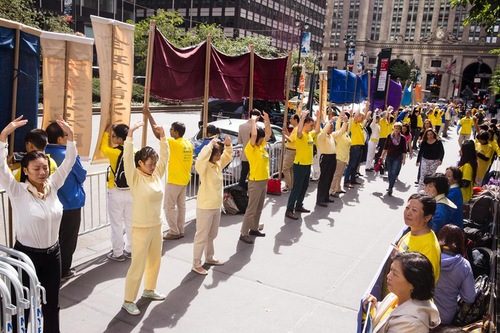 Practitioners do the exercises and hold banners calling for Jiang Zemin to stand trial.

Practitioner Jiang Jianxue is a former English teacher from Beijing, who arrived in the United States one month ago. She was held in forced labor camps twice for practicing Falun Gong. She was tortured by being forced to stand for 19 days straight, 22 hours per day, for a total of 418 hours. The torture nearly disabled her legs.

The Waldorf Hotel is located in downtown New York City. There are always crowds of people in the area. Practitioner Dorrin distributed flyers at an intersection. He said that people were happy to accept flyers though most were clearly busy hurrying along. Many expressed their surprise at the brutal persecution and stated their intention to help stop it.