(Minghui.org) “Bring Jiang Zemin to justice!” said Councilor Liao Hsin-you, from Nantou County, Taiwan, “Reporting Jiang's crimes is to safeguard human rights and justice. Jiang commits crime against humanity. I hope everyone will support the lawsuits of Falun Gong practitioners and their family members against Jiang, and participate in reporting Jiang's crimes in the persecution of Falun Gong.” 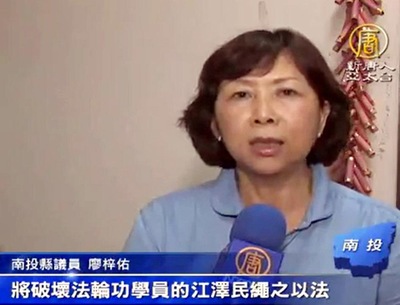 She also said, “I call on our government to give the mainland government a mandate to safeguard human rights.”

More than 180,000 Falun Gong practitioners and their family members have filed criminal complaints against Jiang Zemin, former head of the Chinese Communist Party (CCP), between the end of May and September 18, 2015. They urge the Supreme People's Procuratorate and the Supreme People's Court in Beijing to bring Jiang to justice for his abuses of power in orchestrating the persecution of Falun Gong in China.

There is widespread overseas support for the lawsuits. More than 350,000 people signed a petition in Asia supporting the lawsuits. County councilors in Nantou, Taiwan also signed the petition and participated in reporting Jiang's crimes. 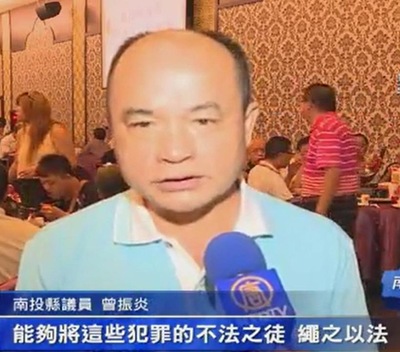 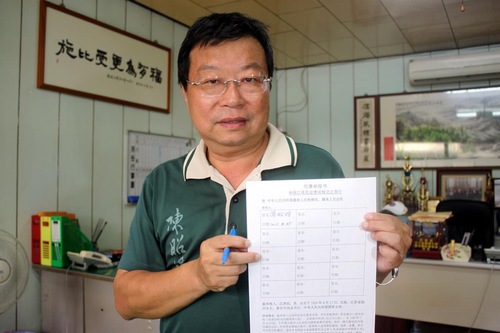 Regarding the CCP's persecution of Falun Gong and live organ harvesting for profit, as well as the wave of lawsuits against Jiang, councilor Chen Chao-yu said, “The Chinese regime is totalitarian. There are no human rights. The persecution of Falun Gong is inhumane. The live organ harvesting is cruel. As a member of the global village, whatever race or country, everyone should support Falun Gong practitioners, and condemn Jiang's crimes.” 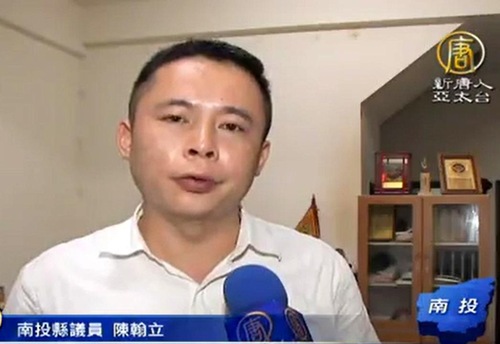 He encouraged more people to participate in reporting Jiang's crimes, and called on Taiwan’s government to urge the mainland regime to respect human rights. 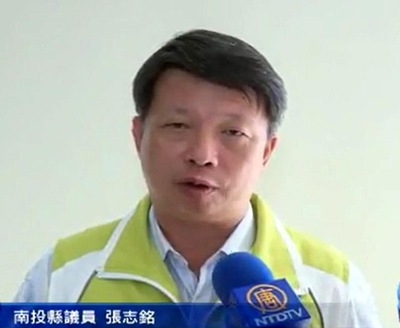 Member Chang Chi-ming of the Legislative Council calls on the CCP to respect and materialize human rights. 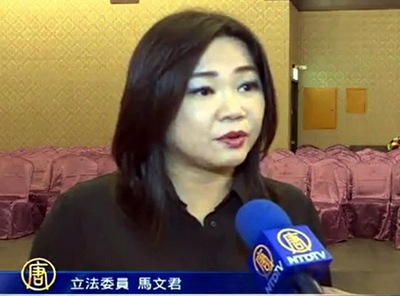 Member Ma Wen-jun of the Legislative Council says each country should pay attention to universal values.

Regarding China's rising in recent years, Member Chang Chi-ming of the Legislative Council said, “A country's progress should not be judged only by economy and military, but materialization of democracy and human rights.” He called on the CCP to follow Taiwan to move forward.

Member Ma Wen-jun of the Legislative Council said, “The reporting of Jiang's crimes is meaningful. Human rights are universal values. Each country should stress and safeguard these values.

“How to protect human rights and fairly treat those who were treated unfairly are what the CCP should pay attention to.”