(Minghui.org) Today's news from China includes incidents of persecution that took place in 14 cities or counties in 9 provinces. According to this report, 17 Falun Gong practitioners were subjected to mistreatment during their detention, and at least 9 practitioners were illegally arrested. 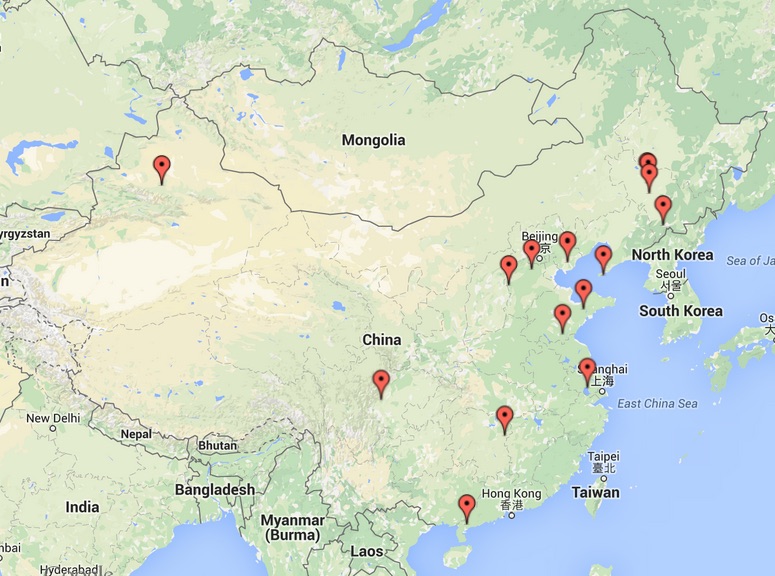 Officers from the Dongfeng Street Police Station have called Mr. Meng Qinglin many times on the phone lately to harass him. On the morning of August 26, 2015, a woman who claimed to be from the property management office knocked on his door. Mr. Meng refused to open it.

That afternoon when Mr. Meng went downstairs, he was dragged into a black car by a man and a woman, who had been staked out waiting for him. He was taken to the First Auto Works Police Department for interrogation. Mr. Meng has returned home.

In addition, the Pingdu 610 Office confiscated the lawsuits Ms. Zhang Cuimei and Ms. Guo Zhaojun from Guxian Town had filed against Jiang Zemin.

Ms. Tang Sulan, in her 70s, lives by herself. She was harassed at home by officers from the 610 Office for suing Jiang Zemin.

Her daughter, who works in a college, and her son-in-law cut their ties with her when they learned that she had filed a suit.

Ms. Zhang Yuhua from Baojia Town was arrested. She was taken to a brainwashing center after 15 days of detention.

Mr. Xu Dexing was arrested by officers from the Huazhuang Town Police Station at a post office when he was mailing a lawsuit against Jiang Zemin in mid-August 2015. He was held in the police station for half a day before being released.

Elderly Ms. Liu Jinrong from the Jiangyuan District was arrested and taken to the police department by Li Yan and other officers from the Sunjiabao Police Station on August 22, 2015. The police asked her who helped her write her lawsuit against Jiang Zemin and why she was suing Jiang. Ms. Liu was held for six hours before she was released.

Ms. Hu Xia from Yangma Town was arrested and taken to the Yangma Police Station on July 18, 2015. She was transferred to the Chongzhou Detention Center. The police ransacked her home. They confiscated a printer, a computer, and Falun Dafa books and materials.

On the morning of August 28, 2015, Shi Guoqiang, Party secretary of Nangangshang Village in Gucheng Town, and Chen Guide, an administrator for women and children in families whose heads of household have left town for work elsewhere, showed up at the home of Ms. Liu Surong, Mr. Wang Zhihai, and Mr. Wang Jiantong and harassed them. The three practitioners were told to sign a repentance statement. They refused.

Parties involved in the persecution:Shi Guoqiang (史国强), Party secretary of the Nangangshang Village, Gucheng Town: +86-13473270675Chen Guide (陈贵德), an administrator for women and children in families whose heads of household have left town for work elsewhere: +86-13803269216

Chen Xiujun, deputy Party secretary of Xiaojue Town, and Li Qiangqiang, officer from the Xiaojue Town Police Station, harassed Mr. Li Errui and Mr. Su Linshu on the morning of August 12, 2015. They asked the two men whether they had filed lawsuits against Jiang Zemin and whether they practiced Falun Gong. The practitioners were ordered to sign a written statement and put their fingerprints on it. Both of them refused.

Ming Ming, deputy Party secretary of Yangjiaqiao Township, and Li Zhigang, Yangjiaqiao Township Police Station officers, broke into Ms. Ren Lanshuang and Mr. Ren Yongxiang's home to harass them on the morning of August 12, 2015. They ordered them to sign a written statement and fingerprint it.

Ms. Yan Donglian was taken to a brainwashing center on August 26, 2015.

Officers from the Jiangxi Police Station in the Lushunkou District broke into Ms. Han Li's home and ransacked it on the morning of August 27, 2015. They confiscated all her Falun Dafa books.

Over 30 people, including members of the Huazhou City 610 Office, officials from the Dongshan Neighborhood Administration Office, and officers from the police station, broke into Ms. Zhang Huahong's home and ransacked it on the evening of August 26, 2015. They confiscated over a dozen DVDs, dozens of envelopes, and ID cards. They took Mr. Zhang's son to the police station, where his answers to police interrogation was recorded.

Officers from the Huazhou City 610 Office found another person's ID card in Mr. Zhang's home late that night. They instructed officers from the Wenlou Town Police Station to harass that person at home.

Around 1:00 a.m. that night, officers arrived at Mr. Yao Guangzhong's home to ransack it. Mr. Yao refused to open the door, so they did not get in.

Officers from the Ciyutuo Town Police Station arrested Mr. Song Zuoqiang at work on the morning of August 28, 2015. He was released around 10 p.m. that night.

Shen Zhigang, deputy director of the police station; Liu Shuqing, head of the Luan County Domestic Security Division; and other officers later ransacked Mr. Song's home. They got in by sending someone to climb over the wall of Mr. Song’s neighbor’s courtyard.

“If You Have Righteous Thoughts, Evil Will Be Afraid”