(Minghui.org) Although today's technology has developed at an unprecedented pace, mankind is still befuddled when it comes to the secrets of birth, illness, and death. Many people search for the meaning of life, but take their questions to the grave.

Ms. Shu Ya says she is one of the fortunate people who have found answers. 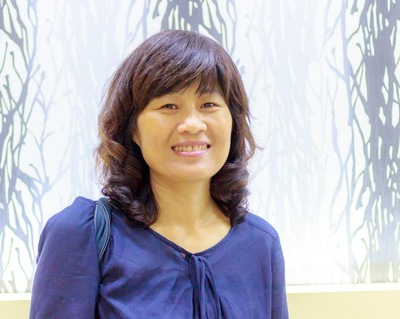 Ms. Shu Ya managed a well-known Italian restaurant and bakery in Kaohsiung, Taiwan. Unfortunately, her life took a tragic turn: her husband was diagnosed with lung cancer and passed away six months later. Their son was only 5 year old. She was overcome with grief and worry, and her hair turned gray overnight.

After her husband's death, the pressure of work and looking after her son was overwhelming. She was exhausted, and her temper worsened with each passing day. She forgot how to smile. Her health deteriorated, and she had to go to the emergency room many times.

By the time her son was 18, her body was worn out. She felt like an elderly person, was in bad health, and doctors could not help her. She tried Yoga, but her health did not improve. She even advised her son about what to do if she died.

Both mother and son cried often and lived from day to day.

Shu Ya's younger sister had tried to introduce Falun Gong to her mother and four sisters in 2000. She tried again in 2010 and invited everyone to a Falun Gong seminar, but only Shu Ya and her mother accepted.

Shu Ya slept through the entire night after the first session. She realized that Falun Gong was not an ordinary qigong practice: since she had not slept well for many years. She also awoke with a healthy appetite.

After the second class, she felt wonderful and could walk with ease on her way home. She did feel cold after the next two sessions, and after the next five sessions, many of her illness symptoms disappeared. By the end of the seminar series, she felt as if she was reborn.

Shu Ya went to the local group practice site daily to do the five Falun Gong exercises after the seminars ended, and she read all the books within two weeks.

After she practiced Falun Gong for a month, she felt like a new person and no longer experienced any illness symptoms. She had been sick for a dozen years.

In her sleep, she felt that a pair of large hands massaging her feet. When she woke , she could bend her feet and was able to squat, something she had not been able to do for a long time.

Before practicing Falun Gong, she had nightmares and feared the dark. She often dreamed that a black shadow grabbed her neck, lifted her up and swung her around. In the dream, she tried to chant the Buddha's name, but the shadow grabbed her and pressed her tighter and tighter until she woke up in a cold sweat.

She was no longer scared at night and slept peacefully.

Her son told her that she had not lost her temper after she began the practice.

Many of her bad habits had disappeared along with her pain, including her addiction to watching television. Her son was amazed by all the changes he saw in her after such a short time.

Her employees also saw her as a new person. Before the practice, she was impatient and never smiled. Now, she follows Falun Gong's principles Truthfulness-Compassion-Forbearance and treats them well.

Shu Ya said her life has became harmonious, and that she is the most fortunate person in the world. Her restaurant does well, and those around her enjoy the new Shu Ya.