The book explains how much of the free world is complicit with the genocide-like crimes in China through allowing transplant tourism patients to purchase organs sourced from victims. Mr. Gutmann spoke at three events in Edinburgh and Glasgow. The popular Edinburgh Art Festival was underway at the same time.

Mr. Gutmann first spoke at Waterstones Bookshop in Glasgow on August 28, 2015, about his investigation into the organ harvesting in China. He then spoke at the University of Edinburgh on August 29, following the screening of “Hard To Believe,” a documentary film about organ harvesting in China, directed by Ken Stone. On August 30, Mr. Gutmann spoke at the Just Festival in Edinburgh on the invitation of the organizers. The title of his discussion was “Mass Killings, Organ Harvesting, and China's Secret Solution to Its Dissident Problem.” 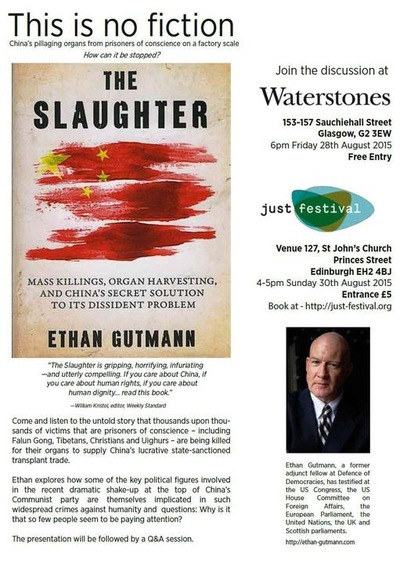 Poster for the events

Mr. Gutmann reinforced to his audience at the three events, that the Chinese regime continues to kill prisoners of conscience for their organs, despite a number of claims since 2006 that it would only take organs from consenting donors. In fact, Mr. Gutmann said that the regime reacted to his book's publishing last year by saying it would only harvest organs from consenting donors starting in January 2015.

“There’s a fairly simple way to think about this,” Mr. Gutmann said, “What is the waiting time for a kidney in the United Kingdom? It is three years. But in China, it is three weeks or less. That means we are looking at an enormous stable supply of donors with matching blood types on demand. This has been one of the tips that something is really going on in China.”

“One other disturbing trajectory, is the prices,” he said, “If China were cutting off the use of organs from prisoners of conscience, we would expect to see the price of organs going up dramatically. But they are not, nor are we seeing waiting times changing. It appears, at least, that this business is as usual.”

Mr. Gutmann said that in reality the Chinese regime is mis-representing the number of organ transplants, “They make up numbers at will. They lie as they like.”

The voluntary transplant numbers were previously only about 1 percent of the 10,000 transplants in China per year, he said. But the voluntary numbers jumped into the thousands after the regime announced that executed prisoners' organs would no longer be taken. Mr. Gutmann said the regime's claims remain unsubstantiated.

He encouraged audience members to talk to their doctors about the forced organ harvesting in China. He told the story of Israeli doctor Jacob Lavee, who proposed a ban on Israeli people traveling to China for organ transplants. As a result, legislation was passed, and it is now illegal for the people of Israel to have transplant surgery in China. Mr. Gutmann said he hoped Scotland would take similar steps. The audience members discussed the issue afterward. 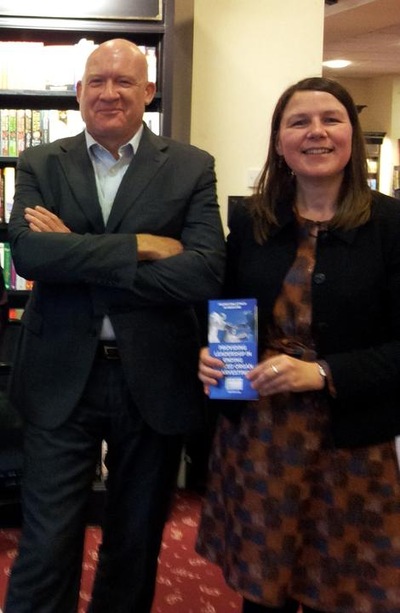 Glasgow City Councilor Martha Wardrop was an invited guest at Mr. Gutmann's talk at Waterstones Bookshop. She said that city councilors should know about what was happening in China, and requested a list of Ethan’s books so she could ask her library to buy them.

Wardrop told the practitioner, “Glasgow and Dalian are twin cities. I would like to gain more information and then talk to the Lord Provost of Glasgow.” Wardrop said that she would also invite practitioners to speak to the City Council.

Glasgow resident Alex Lennox attended the event. He said he had forwarded information about the live organ harvesting in China to the city councilor Andy Doig, of Renfreshire. The councilor replied to his email with, “Whilst China is an economic giant we cannot use that as an excuse to overlook their human rights abuses, not least in Tibet and against the Falun Gong.”

Doig is a Christian. He had encountered Falun Gong practitioners collecting signatures a few years earlier. He signed the petition and asked the practitioners for a few blank forms and flyers to share with his friends at church.

“Let Me Help You”

Claire Russell, a volunteer at Freedom from Torture, received invitations to the events from Falun Gong practitioners. She said she planned to send the information to all the other volunteers in the organization. She stressed that the doctors in the organization needed to know about the organ harvesting in China.

The director of a library in Glasgow was very moved by Ethan Gutmann's talk at Waterstones Bookshop. “Let me help you,” she said, “This is great, as more people can know the current situation in China.” The library director asked for more flyers and posters so she could distribute them to other libraries in the city.

Medical Professional: The Film Is Thought-Provoking

A screening of the documentary film “Hard To Believe” was held in the John McIntyre Conference Center on the evening of August 29, at the University of Edinburgh. The audience included nurses, instructors from the university, and employees of the national health service. Many expressed horror that the Chinese regime would harvest organs from prisoners of conscience, and many were shocked that such a crime against humanity was occurring.

Emma, a research scientist at the Royal College of Surgeons of Edinburgh and University of St. Andrews, said that her research was related to medical ethics. “I know some members of Scottish Parliament and some surgeons,” she said, “I will contact the members of parliament and see if the film screening can be held in the parliament.”

Ethan Gutmann is a veteran China analyst. His first book, “Losing New China: A Story of American Commerce, Desire, and Betrayal,”details his personal experiences and insights into the corruption and seduction foreigners are pulled into while living in and doing business in China. Mr. Gutmann lived in Beijing for three years, where he was exposed to some of the most debase behavior of China's corporate world.