(Minghui.org) Twenty-one-year-old Mike, from Rome, was excited to find a Falun Gong exercise site under a tree in Regent's Park in London on Aug. 22, 2015. That first visit, he spent three hours there learning all five sets of Falun Gong exercises, and reading from the book Zhuan Falun with the group. Afterward, he told the group of practitioners that the exercises felt great, and the book was exactly what he had been looking for. 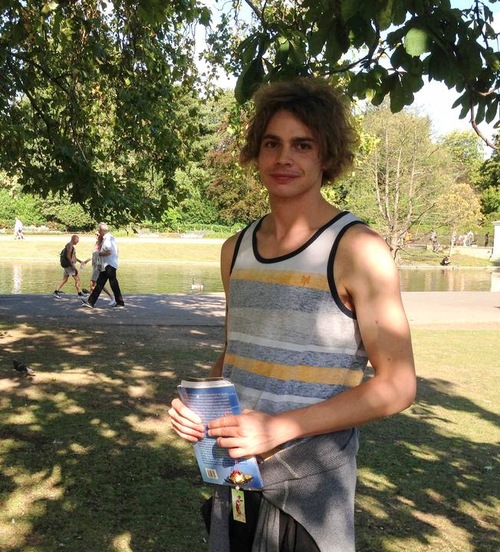 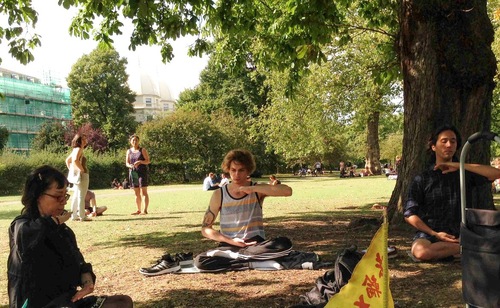 Mike learns Falun Gong exercises for the first time and was given a copy of Zhuan Falun in Italian, his native language.

Mike came to London to study music in January 2015. He found a big change in himself in May: he had lost the capability of dreaming meditation, which he had been experiencing since age 14. He said he used to have the experience of flying in his dreams and seeing beautiful things.

Mike made up his mind on Aug. 19 to find a meditation in London, hoping his dreaming meditation would come back. The next day, he received a Falun Gong flyer at a subway station.

It was the first time Mike had heard about Falun Gong. He got online and found the nearest Falun Gong exercise site and looked forward to going on that Saturday.

When he arrived, a volunteer from the group showed Mike the movements and he learned so quickly that he was able to keep up with the others. He said it felt natural for him and that the exercises were very relaxing.

When Mike mentioned that he was from Italy, one of the practitioners, Tim, handed him a book Zhuan Falun in Italian. It had belonged to an Italian practitioner who left London. Tim happened to think of this book before he left home. He thought he would bring it to the volunteer instructors in case they encountered Italian speaking students. It was perfect timing for Mike, who had no doubt that it was his destiny to read this book. 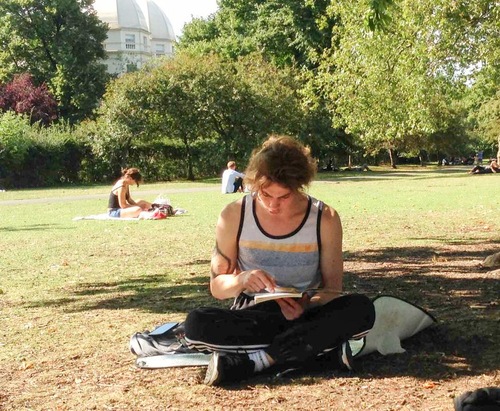 Mike stayed to read a lecture of the book with the group. Practitioners explained that Zhuan Falun was the main book of teachings on cultivating the universal principles of Truthfulness, Compassion and Forbearance. After the study, a practitioner asked Mike what he thought. Mike replied with a big smile, “It's just like that!”

Falun Gong practitioners have established a dozen exercise sites in and near London. Newcomers have continued to visit the sites to learn the exercises and start cultivation in Falun Gong.

Information about exercise sites can be found athttp://en.falundafa.org/falun-dafa-global-contacts.html