The Secret of Staying Young: 87, with the Heart of a 40-Year-Old

(Minghui.org) Mr. Gou Yangtian, now 88, is a retired mid-level government officer from Bazhong City in Sichuan Province. During a routine physical exam last year, a doctor was stunned by his test results.

Healthy for the Past 18 Years

“In fact, I have not needed to see a doctor or take any medication for the last 18 years,” said Mr. Gou. He went on to explain that since he began practicing Falun Gong in 1997, his physical condition dramatically improved.

Before this, he had all kinds of health problems. He used to have an enlarged prostate and had to go to the bathroom seven or eight times each night. With lower back pain, knee pain, and numbness of limbs, he could not carry things and relied on support from others for walking. In addition, he had poor eyesight and hearing loss.

“A miracle began when I started reading Zhuan Falun and doing the exercises,” he said. All of his symptoms soon disappeared.

There are many cases like this among elderly practitioners of Falun Gong. When a group of retired military officials underwent a physical examination at Shenyang 201 Hospital, chief physician Liu found one officer's health very different from his previous medical record.

“You were hospitalized many times before with a myocardial infarction. And the last time was less than two months ago. But now your cardiac fluoroscopy result is so good, as if you are only in your 20s. Tell me, what have you done lately?” asked the physician.

The officer explained that his health improved ever since he started practicing Falun Gong. Right before that, he had a severe toothache, and nothing he tried could stop the pain. He then started reading a copy of Zhuan Falun that his son-in-law gave him. The pain disappeared as he read the book, so the next day he joined a group to do the Falun Gong exercises outdoors every morning.

Within two months, not only did his heart disease disappear, but his overall health and energy had also improved noticeably. 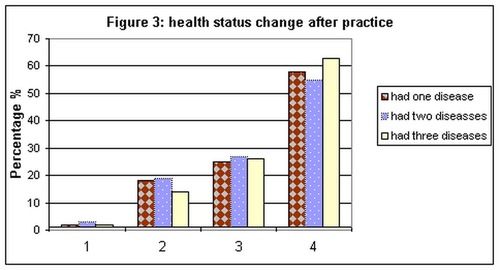 A health survey conducted in China in 1998 (1. No change; 2. Some recovery; 3. Almost recovered; 4. Completely recovered). The persecution began one year later in July 1999.

Xu Yin, a former associate professor at the renowned Tsinghua University, said many people on the college campus have witnessed the mind and body benefits of Falun Gong.

“One of our retired university presidents practiced Falun Gong with his wife. They both experienced renewed health,” Xu recalled. Once, the university purchased a piece of advanced medical equipment that could examine a person's health by analyzing one drop of blood. Many people went through the test, and the result from the retired president's wife surprised the technician: her blood test indicated that she was 40, but she was actually 70 years old.

The husband, also 70, then underwent the blood test as well. His results were very similar, with his estimated age also being around 40 years old.

People have practiced meditation in China and other countries for thousands of years, yet many have forgotten this ancient wisdom. When people align themselves with the principles of Truthfulness-Compassion-Forbearance and return to their original, true selves, they are likely to experience a positive transformation of the mind and body.