(Minghui.org) A total of 220 Falun Gong practitioners from Guangzhou City, Guangdong Province have filed criminal complaints against Jiang Zemin as of July 16, 2015, according to reports compiled by the Minghui website.

The practitioners charge the former Chinese dictator with initiating the brutal suppression of Falun Gong and hold him responsible for the tremendous suffering inflicted upon them by his campaign. The criminal complaints were mailed to the Supreme People's Court and Supreme People's Procuratorate.

Between late May and July 30, 2015, over 120,000 Falun Gong practitioners across China have joined the wave of taking legal action to bring Jiang to justice.

Many of these practitioners recounted how Falun Gong returned them to health and gave them a new outlook on life. Their dreams to live a healthier and happier life, however, were shattered when Jiang Zemin launched a nationwide campaign to eradicate the practice in 1999.

Under Jiang's directives to “ruin their reputations, cut off their financial resources, and destroy them physically,” these practitioners were arrested, detained, imprisoned, and tortured. Some almost died as a result of torture. Some lost their jobs or were forced to pay huge fines.

Many families were torn apart. Some practitioners saw their loved ones sentenced to heavy terms or even tortured to death, simply because they refused to give up their beliefs.

Mr. Wu Zhijun was a medical school professor. Many of his family members practice Falun Gong. Both his mother and aunt died as a result of the persecution. His brother was sentenced to three years of forced labor, and his sister-in-law was sentenced to ten years in prison. Mr. Wu was sentenced to 8 years himself in 2002.

His mother, Ms. Wu Yuxian, was sentenced to seven years in 2002. She was tortured to death at Nanning Women's Prison in Guangxi Province on February 9, 2006.

His aunt, Ms. Wu Yuyun, a schoolteacher, was repeatedly detained in brainwashing centers. She died in September 2004.

Another practitioner who lost his parents was Mr. Zhong Jiawen, a railroad engineer.

Mr. Zhong's father was arrested in January 2001 for distributing flyers about the persecution. While he was detained at Hengyang County Detention Center, he was tortured to critical condition. He was taken to the hospital for emergency care. When he was near death, the authorities released him, but not before extorting 2,000 yuan from his family when they picked him up at the hospital.

Under tremendous stress from the persecution, Mr. Zhong's mother passed away in December 2004.

When 33-year-old Ms. Li Minwei was released from Guangzhou Chatou Women's Forced Labor Camp in November 2001 after being tortured for 20 months. Her hair turned completely gray.

“They hung me up, with my feet barely touching the ground. They didn't let me down until midnight. At 7 a.m. the next morning, they hung me up again. They did this for several weeks. They also tied me on a “death bed” in a spread eagle position for two weeks, without releasing me,” Ms. Li recalled.

“The detention center head threatened me, saying that if I didn't write statements to renounce Falun Gong, they would send me to a labor camp, and that if I died, they would report that I had committed suicide.”

In this form of torture, shackled practitioners are chained to a fixed metal ring on the floor. Their hands are placed on the sides of their legs, with handcuffed under their legs. Everyone is bent over at a sharp angle. 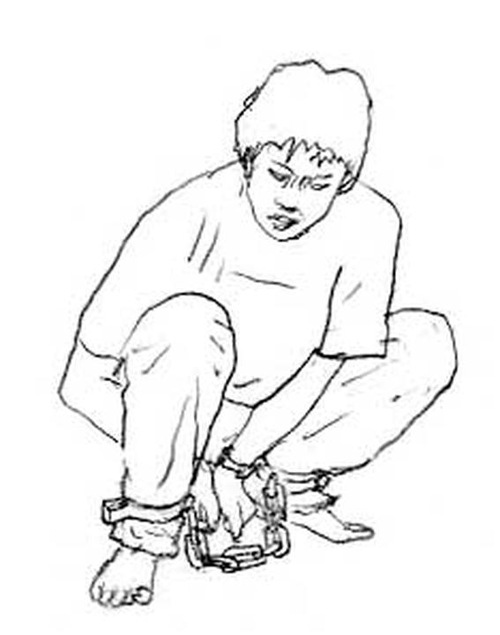 Torture illustration: Shackled through a needle

“This torture really injured me. My body swelled. My ear bled, and I lost my hearing. My right kidney hurt terribly. I also developed high blood pressure. The detention center released me on medical parole,” Ms. Lian wrote in her complaint.

“Four officers beat me and kicked me to the ground. The head of the Domestic Security Division grabbed a metal rod and hit me on my legs, back, and buttocks. I had bruises all over. A few days later, seeing that I still refused to give them the information they wanted, an officer kicked me in the ribs with his boots. I passed out.”

Mr. Wu Zhijun described the intense mental suffering he endured while he was detained at Guilin Prison in Guangxi Province: “In that extremely tiny cell, I was watched by inmates 24 hours a day. I wasn't allowed to talk to anyone or do anything by myself. They even watched me when I used the restroom. Everything I did was reported to the guards. It was suffocating. I was on the verge of a mental breakdown.”

Ms. Zhou Xuexia was an awarding-winning history teacher at Baiyun Normal University in Guangzhou. Because she refused to give up practicing Falun Gong, she was fired from her job and lost her income. She was held in detention centers, brainwashing centers, and forced labor camps. She was once forced to leave home to avoid being arrested.

Mr. Wu Zhijun mentioned that when he and his mother were arrested in 2002, staff from the Domestic Security Division extorted more than 40,000 yuan from them.

In addition to extortion, some practitioners also charged Jiang with the ransacking of their homes.

“Agents from the 610 Office broke into my home on September 23, 2007 and seized two computers, three printers, and other personal belongings. They never returned the items to me,” said Ms. Wei Peiling.