(Minghui.org) The 2015 Mid-US Falun Dafa Experience Sharing Conference was held in Chicago on Sunday, August 2. Practitioners from eleven states shared how they applied the principles of Truthfulness-Compassion-Forbearance in their daily life. During the process of telling people about Falun Gong and the persecution in China, they have made progress in their cultivation practice and witnessed the profoundness of Falun Dafa.

Among the 23 speakers, many have been practicing Falun Dafa for a long time. Their perseverance and determination, as well as looking inward upon encountering conflicts, deeply moved the audience.

Several teenagers told their stories of how they grew with the guidance of Dafa principles and their helping to raise awareness of the persecution of Falun Dafa in China. A few new practitioners shared how they have benefited from Falun Dafa, both physically and mentally. Their excitement and joy elicited rounds of applause from the audience. 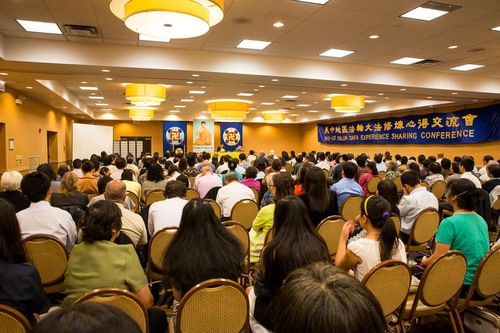 The 2015 Mid-US Falun Dafa Experience Sharing Conference was held in Chicago on August 2.

Joining the Lawsuits Against Jiang Zemin

Since May of this year, more than 120,000 criminal complaints have been filed against Jiang Zemin with China's top court, charging the former Communist Party chief for directing the violent persecution of Falun Gong.

Huang Kui, an Illinois resident who was once imprisoned in China for his belief, also joined the movement and submitted his case to the Supreme People's Court and Supreme People's Procuratorate in China.

“It has been a long time since I came to the United States, and sometimes I don't want to recall those painful days,” said Mr. Huang. But as he recently read about how practitioners were continually tortured and subjected to brainwashing in the prison where he was once incarcerated, he decided to join the effort to prosecute Jiang Zemin. He added, “These lawsuits not only help to end the 16-year-long persecution in China, but also provide an opportunity for more people to learn about the brutal persecution.”

One example is the recent criminal complaints filed by 35 Tsinghua University alumni. After reviewing the severe human rights violations described in these cases, all 15 lawyers they contacted agreed to represent them without compensation. 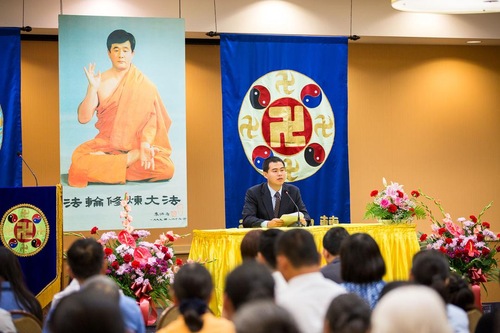 A practitioner speaks at the Chicago conference.

Ms. Song from Indiana also came to realize the significance of lawsuits against Jiang. In the beginning, she was worried about the safety of her family in China. After she understood that this is something she needed to do, she counted on her husband, thinking he would prepare a better document than she could. But there was hardly any progress, because her husband was always busy.

“After calming down and thinking it over, I understood this cannot wait any longer,” she said. By sharing her own experience, Ms. Song hopes more practitioners will join the effort and make breakthroughs in their cultivation.

Mr. Ding in Chicago shared how he let go of resentment and treated others with compassion. When he first went to the Chinatown to set up a booth telling others about the persecution of Falun Dafa in China, many Chinese treated him badly, having been indoctrinated by the communist regime's hate propaganda. One day, he did not feel well, it was very cold, and verbal abuse from Chinese people triggered his anger. Nonetheless, he reminded himself of Dafa teachings to suppress those negative thoughts, while continuing to distribute pamphlets to passersby. As time went on, the situation improved; people became more receptive, and his discomfort disappeared. Even the weather cleared up.

Sara from Missouri told how she introduced Falun Dafa and the persecution in China to government officials in the past few years. In the early days of her cultivation practice, she had strong pursuit and was attached to her own capabilities. As a result, she did not improve much based on the Fa. Gradually, she encountered situations in which she had to take on new challenges and change her mentality fundamentally. She shared how she learned how to enlarge the capacity of her heart and cherish every opportunity in the journey. 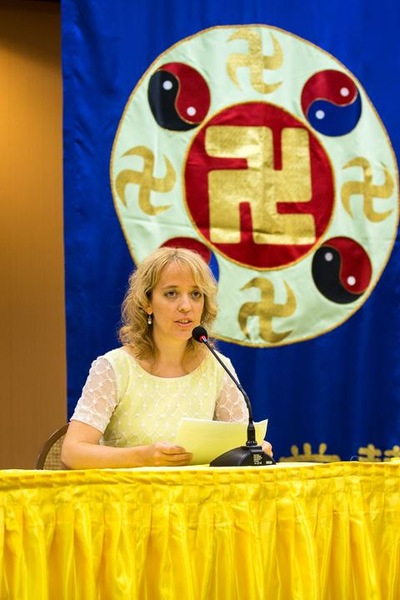 Many practitioners learned the importance improving themselves by looking within when conflicts arise.

Jenny, Annie, Tanner, and Yuanyuan are all teenagers who participated in the Ride to Freedom project, in which riders bicycled from Los Angeles to Washington D.C. between June 1 and July 16 in an effort to rescue orphans whose parents were tortured to death in China for their belief. Despite their young age, they have been cultivating diligently and made great progress during the 3000-mile journey.

Yuening, a middle school student, decided to start memorizing Zhuan Falun, the main book of Falun Dafa. She also became more determined in doing the exercises, which she had done poorly in the past out of laziness. After doing the exercises, she found that her entire cultivation had improved.

College student Pavel Castro began to practice Falun Dafa less than one year ago, after finding Dafa on the internet and learning by himself. He said he was appalled by the brutality of the persecution in China.

By reading experiences of other practitioners, Pavel was impressed by their determination. Although cultivation is a new concept for him, he felt a sense of mission. One day during a dream, he made up his mind to continue cultivating diligently, after which he was led to an auditorium where he watched classical Chinese dance.

He later heard about Shen Yun Performing Arts and bought a ticket. Inside the theater, he saw that the performance was the same as in his earlier dream. This way, he joined other practitioners and made more progress in cultivation.

Lisa Rudek also started to practice less than one year ago. She heard about Falun Dafa from her eye doctor. “That information filled me with energy. I was so excited that I forgot about my eye problems.”

When attending the Falun Dafa conference in New York this May, Lisa saw a scene with Buddhas dressed in gold, sitting with their legs crossed, with glaring light shining throughout the conference center.

Lisa says she now handles things using Dafa principles. She became calmer and less agitated. Although it has been only a few months, she has identified many of her attachments to let go of in the cultivation process.