(Minghui.org) On August 22, 2015, Chamer Zeitung and Bayerwald-Echo, two German newspapers, reported that German Falun Gong practitioner Ms. Min Teng-Schwägerl had filed a lawsuit with the Chinese Supreme Court and the Supreme People's Procuratorate against the former head of the Chinese Communist Party (CCP), Jiang Zemin, for murder, libel and abuse of power in the persecution of Falun Gong. She became one of 329 German and Swiss Falun Gong practitioners who have recently filed lawsuits against Jiang for genocide and crimes against humanity. 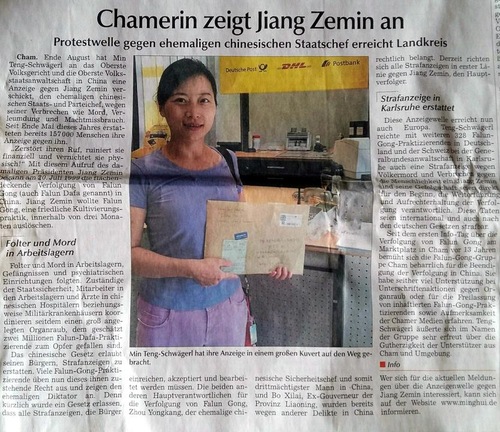 Both newspapers covered details about the brutal persecution in China over the past 16 years, including an estimate of 2 million practitioners who died from the CCP's organ harvesting for profit. The stories made mention of perpetrators Zhou Yongkan and Bo Xilai's being sentenced to prison.

Mr. Michael Schwägerl, Min's husband, also filed a lawsuit with the Chinese Supreme Court and the Supreme People's Procuratorate against Jiang. Mr. Schwägerl said that as a Christian, he had to stand up against Jiang's murder of Falun Gong practitioners.

Mr. Schwägerl wrote in his indictment, “My wife started practicing Falun Gong in late 2002. However, because of the lies against Falun Gong on the Chinese Consulate's website and the German media's reprint of the CCP's propaganda during Jiang's rule, I almost divorced my wife. My family was also influenced by these lies, and pressured me to force my wife to give up practicing Falun Gong. My wife stood firm on her belief, and encouraged me to read the book Zhuan Falun. I felt that my heart was warmed while reading the book. It was a great feeling. After I finished the book, I knew that Falun Gong is good, and support their resistance to the persecution. I have participated in Falun Gong parades, and received positive feedback. Many people have signed petitions showing their support for Falun Gong, and helped spread information about the persecution. It gives me hope to see that there are so many kind people in this world which is filled with negative information. Sometime spectators and I were moved to tears. I testify with my personal experience that Jiang's propaganda was sheer slander. Jiang should be brought to justice for depriving practitioners of their freedom of belief, and for killing millions of them. He must be punished!”