(Minghui.org) Falun Gong practitioners in Paris have for years reached out to Chinese tourists to let them know about the brutal persecution in China and to help them break free from the Chinese Communist Party (CCP) by renouncing their Party membership. Their activities have caught the attention of a popular French investigative journal.

Mediapart, an online investigative and opinion journal with about 100,000 paid subscribers, ran an in-depth report on August 11 about Falun Gong, the persecution, and practitioners' efforts to expose the persecution to Chinese tourists in Paris. Based on interviews with practitioners, the story discusses the persecution that some of these practitioners endured before taking refuge in France, and also addresses the current legal efforts in China to bring the main perpetrator, former Chinese president Jiang Zemin, to justice. 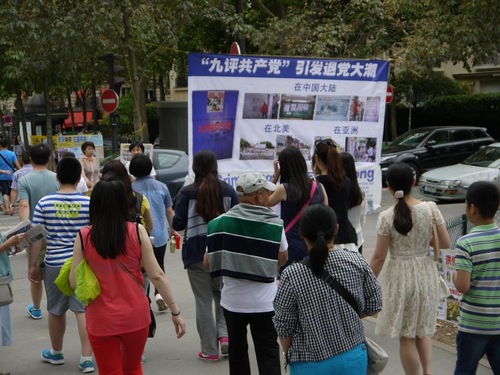 Chinese tourists pass by Falun Gong informational posters in Paris about the global movement of quitting the Chinese Communist Party.

The article presents a detailed, overall picture of the 16-year-long persecution, citing key events – from Beijing's initial endorsement and promotion of Falun Gong, to the CCP's insecurity when it learned that there were more than 70 million practitioners, the Party's slander and restrictions against the practice, the peaceful petition in Tianjin and the April 25 peaceful protest.

After Jiang Zemin launched the nationwide persecution overnight on July 20, 1999, suddenly millions were persecuted. Tens of thousands of practitioners were sent to mental hospitals and forced labor camps. To this day, there is no exact figure as to how many practitioners have been sentenced or killed in the persecution. 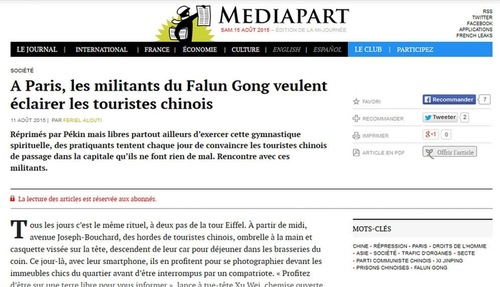 The article touches upon the current movement of well over 100,000 practitioners filing criminal complaints against former Chinese president Jiang Zemin. The article also discusses the fact that many of the chief perpetrators, high-ranking CCP members, have been taken down and prosecuted under the current administration's anti-corruption campaign.

Among the practitioners interviewed for the story is Alain Tong, president of the Falun Dafa Association. The article quotes his explanation for practitioners' persistent efforts to reach out to Chinese visitors: “We said to ourselves, if we do not expose what is happening, who will?” Mr. Tong therefore organized truth-clarification activities in areas that have concentrated Chinese populations. Through their efforts, practitioners remain committed to providing uncensored information to Chinese tourists and exposing the lies of the Chinese Communist Party.