In the past 16 years, Ms. Wu was subjected to five home-ransackings, seven detentions/brainwashing sessions, and was imprisoned twice for a total of seven years for telling people about Falun Gong.

Torn away from her family for most of the time since the persecution began, Ms. Wu said this hurt her more than the physical torture. “I missed my younger son's wedding. I missed watching my granddaughter growing up. I really missed my family while I was detained.” 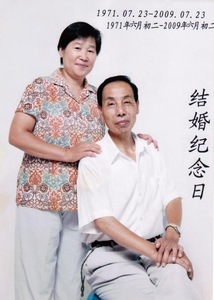 Ms. Wu and her husband on their 38th wedding anniversary. The photo was taken between her two wrongful imprisonments on July 23, 2009.

“Fortunately for me, I still had the chance to reunite with my family after I was released. I'm especially thankful for the support my husband gave me through it all. But there are many other Falun Gong practitioners who lost their loved ones in the brutal persecution and those whose families were torn apart. Sadly, these tragedies are still going on today in China,” said Ms. Wu.

She hopes that the criminal complaints against Jiang can facilitate the end of the persecution and bring freedom to the Chinese people.

I used to suffer from many ailments, including heart and stomach problems. My hands and feet felt numb all the time. I even felt cold on hot summer days. Feeling so ill, I was depressed and had a bad temper all the time. My son almost ran away from home because of my constant fighting and quarreling with my husband.

Then I found Falun Gong, and it saved my life and my family. I started the practice in May 1998 and all the illnesses I had for over twenty years disappeared within one month. I finally found peace. I was much happier than before and I became more considerate of others. I never lost my temper with my husband again.

Both my husband and sons said to me: “Your practicing Falun Gong brought good fortune to our family.”

Indeed, the future looked bright, but then the nationwide persecution began. With Jiang's persecution policy of “ruin their reputation, cut off their finances, and destroy them physically,” my life, together with the lives of millions of Falun Gong practitioners inside China, were turned upside down overnight.

Blacklisted for Standing Up for the Right to Practice Falun Gong

With the onset of the persecution, our exercises site was forcibly shut down. Propaganda and slander attacking Falun Gong were seen everywhere as the regime attempted demonize the practice in order to justify the persecution.

This pained my heart and I couldn't sit back and do nothing. I went to Beijing to protest and called on the government to stop the persecution and give us a free environment to practice.

Ignoring my plea, the police arrested me and sent me back home. I was blacklisted and often targeted in the persecution since then.

A Year of Detention and Brainwashing

I was arrested during a mass arrest of Falun Gong practitioners on September 12, 2001. The police ransacked my home and confiscated everything related to Falun Gong.

Because I refused to write a statement renouncing Falun Gong, the police held me in a detention center and a brainwashing center, where I was subjected to different forms of torture in an attempt to force me to give up practicing Falun Gong.

I was forced to watch videos and TV programs attacking Falun Gong. The brainwashing center staff pointed several bright lights at me at night to keep me from sleeping. I was shadowed by inmates most of the time, even when I used the bathroom. I had no freedom or privacy.

My husband was very worried for me. He passed out several times during that period. The police also extorted more than 5,000 yuan from my family.

In September 2002, one year after my arrest, I was sentenced to two years in a forced labor camp. But because I failed the physical examination, the camp would not admit me.

The police detained me at the brainwashing center for another two months before releasing me and continued to frequently harass me at home.

Family Traumatized by the Police

A friend called me in August 2003 and said she wanted to learn Falun Gong to improve her health. I sent her some literature and videos. I had no idea that the police were monitoring my phone.

A few weeks later, a large group of police officers broke into my friend's home, arrested the her and her husband and interrogated them for one day.

They also went to all of my relatives' homes to look for me. My elderly mother in her late 80s was terrified when the police ransacked her home. She suffered anxiety attacks from then on. Whenever the word “police” was mentioned, she began to tremble uncontrollably.

My husband was also traumatized and his health deteriorated.

Hoping to avoid having my family implicated in the persecution, I left home and went from place to place for about a year.

Like madmen, several of them picked me up by my legs and arms and took me away. My daughter-in-law was terrified, and was thereafter unable to produce breast-milk for her baby.

I went on a hunger strike in the detention center to protest the arrest. On the 8th day of the hunger strike, the guards began to force-feed me. My throat was injured by the feeding tube and my mouth was full of blood.

The guards cuffed my hands and feet around the clock and force-fed me every day.

On the 38th day, I felt I had pushed my body to the limit and I stopped the hunger strike.

I was sentenced to three years for sending Falun Gong materials to my friend, and taken to the Xinxiang Women's Prison on June 24, 2004.

There, I was subjected to many tortures, including sleep deprivation, sitting on a small stool for a long time without moving, and more than ten hours of forced labor every day.

After three years of torture, I returned home and reunited with my family in 2007.

I wasn't able to enjoy much time with them before I was arrested again while visiting friend who also practices Falun Gong on September 23, 2009. She and I were sentenced to three and four years respectively.

My husband, in his 60s, learned how to drive for the first time in his life in order to visit me. We only had a very short period of time to talk to each other every month. He often told me things about my mother and my granddaughter, but never mentioned a word about how hard it was for him to handle the situation. I felt grateful for his support and encouragement during the most difficult time in my life.

On September 22, 2013, I walked out from the prison and finally resumed my normal life.

“Snapshot of Falun Gong Practitioners Whose Copies of Lawsuits Against Jiang Zemin Were Received by Minghui on August 21, 2015”