(Minghui.org) It is well known that Houston's summers are humid and hot, with temperatures often above 90 ºF. Standing under the sun without moving is even harder. But for practitioners who have maintained their presence in front of the Chinese Consulate for the past 10 plus years, such suffering is negligible compared to the important message they are trying to convey.

“Many Practitioners Were Secretly Detained and Tortured”

“Falun Gong has been suppressed in China for 16 years, and it is still going on right now,” said Rebecca, a practitioner volunteer. Arrested in China for her belief, she said many practitioners left their ID cards at home before going to Beijing to appeal for the right to practice Falun Gong. “According to Jiang Zemin's persecution policy, when a practitioner is arrested for appealing, local officials will also be targeted. We did not want to cause them trouble, so we often refused to provide our names or tell what city we came from.

“Unfortunately, many practitioners were, as a result, secretly detained and tortured for a long time. Some were sent to labor camps or prisons, even becoming victims of live organ harvesting or plastination.” 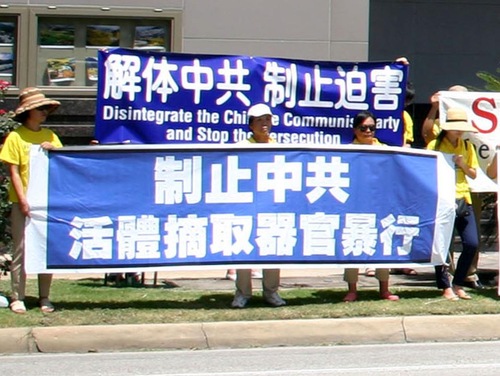 Banners in front of the Chinese Consulate in Houston, Texas. The banner in the front reads, “Stop the CCP Harvesting Organs from Living Falun Gong Practitioners.”

Passersby were often touched by her words. “Many people are thinking the same thing,” one Chinese immigrant said to Rebecca, pointing to a banner that said, “Sue Jiang Zemin.” “They are thinking, 'What you are doing is great!'”

Ms. Li, who passed by the Chinese consulate, signed a petition to support the lawsuit against Jiang and took pictures of the banners. “You have been working very hard, she said. "Thank you.”

“We Do Not Earn Even One Penny”

A Chinese woman spoke to Rina, another practitioner. “I have lived in Houston for several years," she said, "and often see your group here. Tell me, how much money do you earn per day?”

Her question made Rina chuckle: “We are volunteers. We do not earn even one penny by coming and standing here. Because many Chinese were misled by the Chinese communists' hate propaganda, we are hoping you can learn the truth.”

After hearing Rina describe the brutalities practitioners have endured for their belief, the woman decided to separate herself from the regime by quitting the Chinese Communist Party (CCP) organizations. “In the past I did not know what Falun Gong was. Now, since you have told me about this, I will look into it, because I also want to be as healthy as you,” she said.

“We Will Put This on Our Social Network”

Rebecca said she was touched by the support from so many people. One day when after she and another practitioner had set up posters and unfolded their “Stop the CCP Harvesting Organs from Living Falun Gong Practitioners” banner, two men in suits waiting to apply for visas spoke with her and learned about the persecution in China.

Exiting the consulate later, they asked Rebecca and another practitioner to display the banner to next to their car for a group photo. “We will put this on our social network and let everybody know just how bad the Chinese Communist Party is,” one of them said.

Impressed by the practitioners' peaceful meditation, company executive Silva asked for two copies of Falun Gong pamphlets. “It looks easy to learn," he said. "I will give it a try.”