Officers from the Gansu Province 610 Office launched an investigation. They monitored, followed and arrested practitioners. To find the originator of the banners they demanded to see the handwriting of practitioners.

Ms. Wang Liqian and her husband Mr. Guan Longyan were arrested at their apartment, which is on the 4th floor. Officers were lifted up by a crane, and broke in through the windows, in the early morning of July 15. The police did not provide any identification, ransacked their apartment and confiscated many personal items including computers and printers.

Before the arrest, police had monitored Ms. Wang’s home for 21 days. On the second day the police cut off the power, leaving them in the dark and without electricity.

Ms. Yue Puling, her husband, son and Ms. Ma Pulan were monitored for several days. They were arrested on July 1.

Ms. Yue, her husband and Ms. Ma were interrogated, forced to sit on metal torture chairs, called a “Restraining Chair,” for at least 24 hours and deprived of sleep. If kept for too long on this chair, the victim is paralyzed once he or she is released. 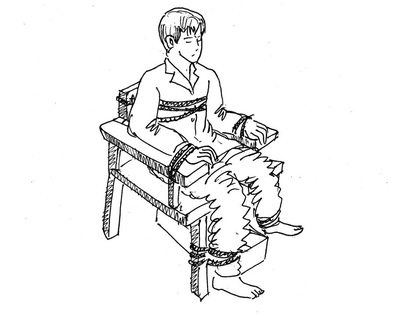 The officer also ransacked another practitioner's home where Ms. Ma used to live, and confiscated all Falun Gong books, a computer and valuables.Other Arrests

Ms. Jin Jilin was arrested and her home ransacked. Her daughter and son were left alone at home.

Ms. Lu Yuying, her sister and niece were arrested and released the next day.

All female practitioners arrested are detained at the Lanzhou City No. 1 Detention Center.