(Minghui.org) It has been 16 years since former Chinese Communist Party (CCP) leader Jiang Zemin and his regime launched the persecution of Falun Gong in 1999. Since then, innocent Falun Gong practitioners in China have been tortured in labor camps, prisons, and detention centers. Thousands have died as a result of torture, and many were killed and had their organs harvested for profit.

In both Western and Chinese culture, the principle of karmic retribution, that is, being held ultimately accountable for one's own actions, is widely accepted. In other words, good deeds will be rewarded with good fortune, while evildoing will meet with its due.

The following is meant to serve as a compassionate reminder of the principle that whoever does evil will eventually be held responsible for their actions.

Based on information received by Minghui since July 20, 1999, at least 446 people who participated in persecuting Falun Gong in the Shijiazhuang area have met with ill fates. Some 100 of their family members have also had tragedy befall them. They are government officials, employees of executive organs, authorities in government enterprises, and others.

The following places have the most number of cases where persecutors met with an ill fate: 148 in Shijiazhuang, 65 in Xinji City, 59 in Pingshan County, 31 in Zhengding County, 22 in Jingxing County, 19 in Luquan City, 15 in Shenze County, and 14 in Gaocheng City. 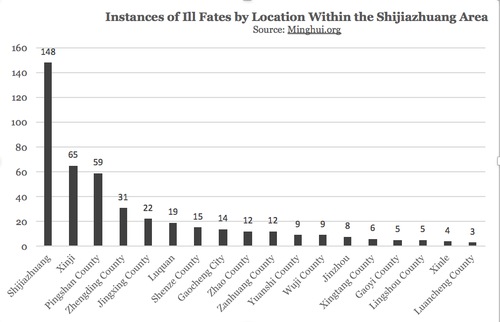 Most of the tragedies took the form of car accidents, disease, arrests, and criminal and administrative penalties. 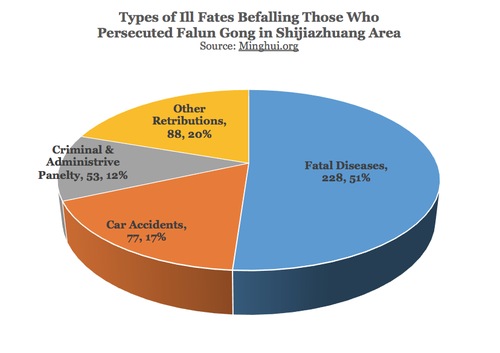 Among all the cases, 287 of them, about 64%, were serious tragedies involving death, fatal diseases, and serious injuries. 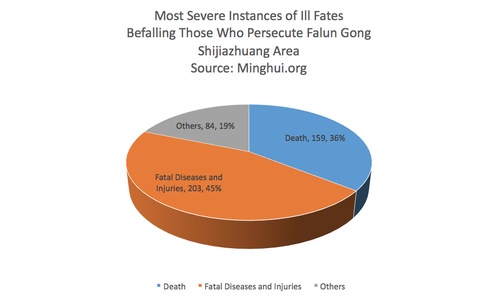 One hundred forty, about 32% of those who met with ill fates, held positions in public security organs, procuratorial organs, the courts, or judicial organs. One hundred thirty-one, about 29% of them, were administrative officials. Their total of 61% showed that local authorities, who directly carried out the persecution, were among the majority. 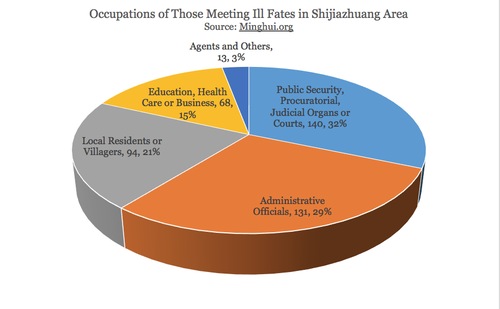 “While Given a Second Trial, Two Falun Gong Practitioners Are No Closer to Seeing Justice Served”