First Half of 2015: 38 Falun Gong Practitioners Die as Result of Persecution

(Minghui.org) “They used electric batons to shock me from head to toe, everywhere they could. Sometimes it was two batons at the same time, sometimes more. Apart from the time when they ate and when the batons needed to be recharged, it was non-stop for three days and nights,” said Mr. Guo Chunzhan as he described his experience in Shenyang No. 1 Prison.

But that was not the end of it. The next day, the police filled plastic bottles with boiling hot water and pressed them against Guo's bare back and buttocks. When one bottle cooled, it was replaced with another hot one. When they were done, his back was completed scorched.

For the next two months, Mr. Guo had to lay on his stomach. He could hardly move, but that did not stop police from tormenting him more. “They instructed inmates to scrape off the scabs using screwdrivers. They called it 'performing surgery,'” Mr. Guo said. “The pain was excruciating. It was worse than being dead.”

Mr. Guo Chunzhan was arrested in 2009 for practicing Falun Gong and illegally sentenced to four years in prison. When he left prison in 2013, a large area on his back had necrosis, a non-reversible condition of dead skin tissue. He also had many internal injuries from being tortured at the prison. On April 30, 2015, Mr. Guo passed away.

Mr. Guo is one of the 38 reported deaths of Falun Gong practitioners between January and June 2015. These cases are distributed across 17 provinces, autonomous regions, and municipalities directly controlled by the central government. Ranked by the number of death cases, Liaoning Province is first with 7 deaths, followed by Jilin Province (6 deaths) and the Chongqing municipality (4 deaths). Twenty-two of the 38 practitioners were female. 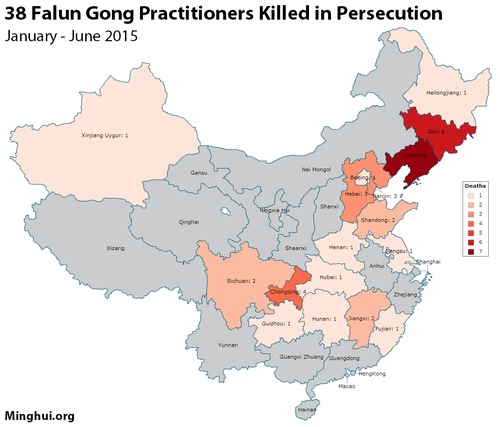 Figure 1. Map of practitioner deaths resulting from the persecution during the first half of 2015.

Some of these practitioners died serving illegal prison terms, while others died at home, unable to recover from injuries sustained or illnesses contracted from abuses they suffered in custody.

In addition, during the first half of 2015, we also confirmed 23 previously unreported deaths that took place between 2001 and 2014.

Like Mr. Gao, many other practitioners went through similar ordeals because they refused to give up their belief in Falun Gong. They were healthy thanks to their practice of Falun Gong, but arrest and detention caused them irreversible mental or physical damage, which eventually led to their unnatural deaths. Below we highlight four more such cases.

Mr. Zou Yunzhu, a vegetable farmer from Guang'an City, Sichuan Province, suddenly died on May 11 while serving a three-and-a-half-year term. Without conducting an autopsy, Jiazhou Prison claimed that Mr. Zou died of a heart attack, even though Mr. Zou had no history of heart problems.

Ms. Yang Suolin, an official at Anshan Blower Factory in Liaoning Province, spent 3 years in a forced labor camp and 7 years in prison. When she was released from prison in August 2014, she was paralyzed from the waist down. Despite her deteriorating condition and advanced age, a judicial officer would not stop harassing her: he called her every week, threatening and demanding that her children prevent her from contacting other Falun Gong practitioners. Ms. Yang passed away on April 22, 2015, at the age of 78.

Ms. Chu Lianrong from Fengning Manchu Autonomous County was arrested on December 2014 for hanging banners to raise public awareness of the persecution of Falun Gong. When her brother took her home three months later, she was emaciated, could not lift her head, and had several injuries on her face. She could not eat, drink, talk, or open her eyes. Her body tensed when she was touched. She did not respond to her family, as if she could not hear anything. She passed away on April 12, 2015, 19 days after release, at the age of 50.

Ms. Lin Fenglian, a retired teacher from Jilin Province, suffered a stroke when police surrounded her after she posted information about the persecution of Falun Gong at a residential building in 2012. After that, she had difficulty caring for herself. Ms. Lin passed away on April 25, 2015.

The following photos show Ms. Chu Lianrong, mentioned above, and 7 other practitioners about whom we have brief information (see photo caption). 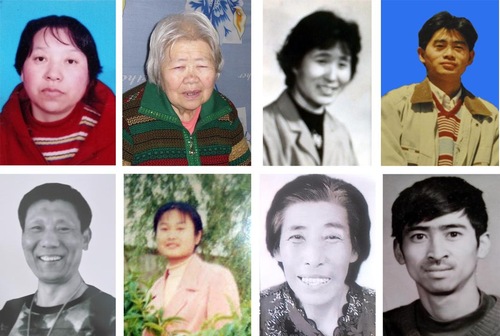 Top row, from left to right: Ms. Chu Lianrong spent 10 years in prison cumulatively, and passed away in April; Ms. Liu Yulan and another family member died as result of the persecution; Ms. Zhu Yulan died in prison; and Mr. Zhang Xianlong, a teacher.

“My Clients Quit the CCP”