(Minghui.org) Mr. He Sanpu, the former deputy director of the Publicity Department of Henan Province, became a refugee in New Zealand in 2009 to escape the persecution of Falun Gong practitioners in his homeland China. 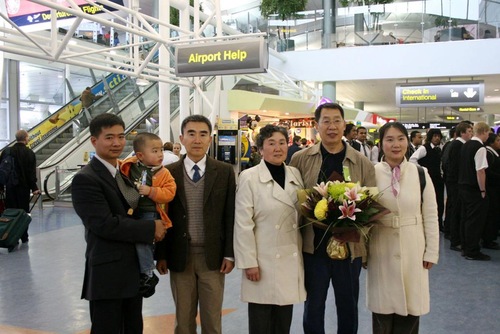 Mr. He Sanpu (second from right) reunited with his family at a New Zealand airport in 2009 after he fled China to avoid the persecution.

He and his family, including his wife Ms. Zhang Hanwen, his daughter Ms. He Yanchen, and his son-in-law Mr. Yang Ziwei, joined the more than 100,000 others who have filed criminal complaints against Jiang Zemin since the end of May 2015.

They jointly signed and mailed their complaint to the People's Supreme Procuratorate, located in Beijing China, and submitted a copy to the Minghui website.

“I don't hate Jiang Zemin. because I am a Falun Gong practitioner who follows the principles Truthfulness-Compassion-Forbearance,” said Ms. Zhang.

She continued, “We are not only suing because of the persecution of this cultivation practice, but also because Jiang committed crimes against humanity.”

Suing Jiang Zemin is important because, “Many Chinese people are unaware of the crimes that were committed while Jiang was head of the Chinese communist regime. The Chinese Communist Party (CCP) is highly adept in covering up the atrocities it commits. These lawsuits will expose the crimes and let the Chinese people see the CCP's true nature.”

The family's happy life lasted only four years after they began practicing Falun Gong. Jiang Zemin, then leader of the Chinese Communist Party, started the persecution of Falun Gong in July 1999.

Ms. Zhang was detained four times, beaten, fined, and humiliated. She was sentenced to two years of forced labor in 2001, during which time she was tortured and force-fed when she went on a hunger strike.

When released, her colleagues did not recognize the white-haired old woman with many teeth missing and two paralyzed arms.

Mr. He was arrested two times and detained three times. He was sentenced to forced labor, where he was shocked with five electric batons at the same time. Because he persisted in his belief in Falun Gong, his original sentence was extended for three months. Instead of being allowed to return home after his release, he was taken immediately to a brainwashing center.

The couple left their home and went into hiding in 2003. The authorities put their names on a wanted list, which was published in the newspaper Henan Daily.

The couple was arrested in July 2005. Ms. Zhang escaped from detention after two weeks and left for New Zealand the following year.

But Mr. He was not so lucky. He was detained in a brainwashing center for more than two years, and escaped in August 2007. He changed his name and fled the country penniless.

Mr. He reunited with his family in New Zealand in 2009, which now had grown to five people and included his wife, daughter, son-in-law and grandchild.

Falun Gong as a Life Saver

Ms. Zhang Hanwen was the first family member to practice Falun Gong. She used to be on the medical staff at Zhengzhou University. She was diagnosed with several serious illnesses at age 36, including inflammation of the esophagus and erosion of the coronary arteries, among others.

When she was at the end of her rope, a colleague introduced Ms. Zhang to Falun Gong, and she wanted to give it a try.