(Minghui.org) More than 30 young Falun Gong practitioners from Germany, Austria, and Switzerland participated in a one-week Minghui Summer Camp July 28 to August 3 in Dortmund central Germany. Ranging in age from 5 to 17, campers read Falun Gong books, did the exercises, and learned classical Chinese dance as well as Chinese painting.

Xiuxiu, an 11-year-old from Stuttgart, shared how Falun Gong changed him into a better person. One day he and his friend saw 100 euros on the ground. He did not take it and warned his friend not to, either. But his friend took it anyway, and several days later he suffered a bad a headache. “I knew there would consequences if he took money that did not belong to him,” said Xiuxiu. 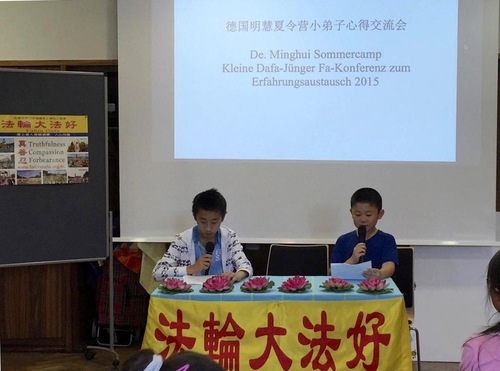 Practicing Falun Gong also helped him with his schoolwork. When he and his family moved to Stuttgart three months ago, Xiuxiu found the curriculum much more advanced than in Berlin. He was full of anxiety while preparing for an exam but he calmed down after his mother assured him, “You are a Falun Gong practitioner. Things will be fine if you just do your best.” He did well the following day—he earned the highest score in his class.

Five other young practitioners also shared how they improved at camp. Six-year-old Elida was a picky eater. She liked snacks and sweets, but not regular food. Another shortcoming she had was that she had to go to bed with her mother or sister in order to fall asleep. The summer camp made her aware of these attachments and she soon corrected them. “Teacher also encouraged me many times in my dreams,” she said. 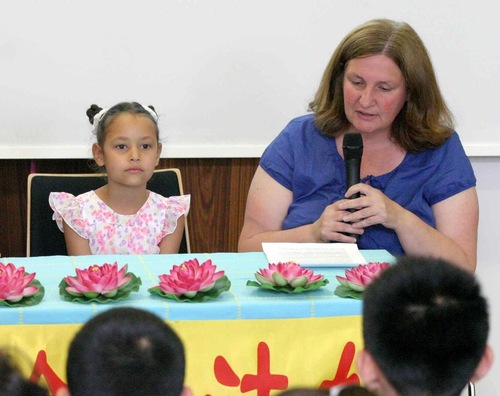 With her mother's help, six-year-old Elida tells how she improved at camp.

Joshua and Eike, two of the oldest campers, used to play video games a lot. Life at camp made them more responsible and respectful. They helped organize performance rehearsals and reminded other campers to keep order.

These campers improved by reading Falun Gong books and following the teachings. They read Zhuan Falun for an hour every morning and learned to give it their full attention.

They did the exercises every afternoon. A 5-year-old camper was able to learn all five exercises within two days. Eight-year-old Sarah could do the meditation with both legs crossed for 55 minutes when she tried it the first time. Touched by the peaceful movements, an older woman walking by said that she was very interested and would come back to learn. 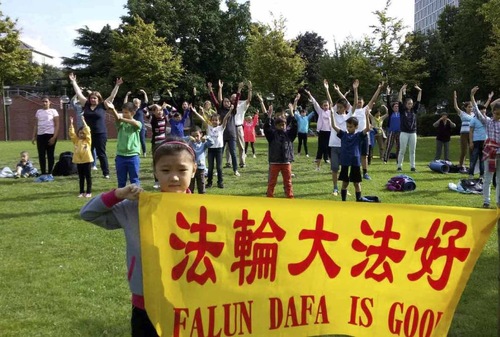 Another example was 9-year-old Gabriel. One day he had a stomachache during class. After reciting “Falun Dafa is good, Truthfulness-Compassion-Forbearance is good,” he felt better, but the pain was not totally gone. When he read the Falun Gong books with the group that evening, he was very focused and the pain disappeared that day.

“Cultivation at This Time of Filing Lawsuits Against Jiang Zemin”