Japan: Voices Against Persecution in Hiroshima

(Minghui.org) On August 6, 2015, the 70th anniversary of the atomic bombing of Hiroshima, Japan, people from all over the nation gathered in Hiroshima Peace Memorial Park to pay their respects and call for peace.

Falun Gong practitioners were also present to update passersby on the 16-year-long brutal persecution of the practice of Falun Gong in China. 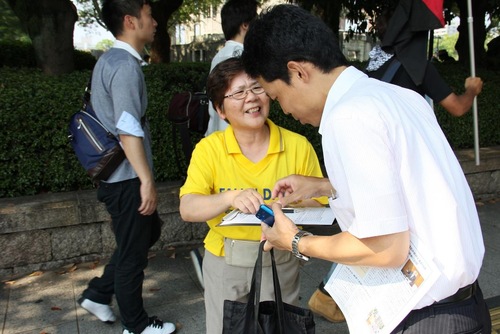 A passerby signs a petition calling for an end to the persecution.

“I see you practitioners in this park every year, and I know why you are here,” one Japanese man said, “But there is hardly any news coverage on this. What's going on now? How many are still practicing Falun Gong?”

A practitioner replied, “More and more people have learned the truth about the persecution. Not only that, in the past three months over 134,000 people have filed criminal complaints in China against former Chinese leader Jiang Zemin for persecuting Falun Gong.

“There are about 100 million practitioners worldwide, and new people join from time to time,” the practitioner continued, pointing to several new Japanese practitioners in yellow T-shirts demonstrating the exercises.

“How about the Chinese communists? There are lots of human rights violations in China,” the man asked as he signed a petition calling for an end to the persecution.

“It's improving. As a matter of fact, 210 million have announced their resignations from the Chinese Communist Party (CCP) organizations,” said the practitioner. 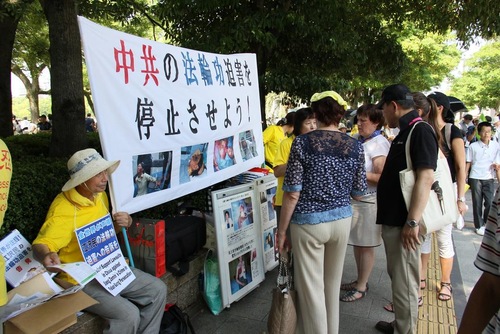 Reading about the persecution. One poster says, “Stop the CCP from Persecuting Falun Gong.”

A Chinese tourist came up and said, “When I was young, all my textbooks said Falun Gong was bad. Later I knew they [what the textbooks said] were lies. If a person wants to practice Falun Gong, how can he or she get started?”

“You can learn the exercises, then read the book Zhuan Falun,” replied the practitioner. “We follow the principles of Truthfulness-Compassion-Forbearance and try to become better people.”

The tourist thanked the practitioner, signed a petition, and took some brochures and a DVD. 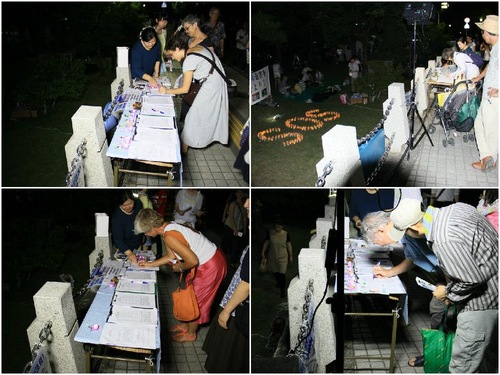 Signing petitions calling for an end to the brutal persecution

As the practitioners held a candlelight vigil at dusk, passersby came up to learn the exercises until the event was over.