How a Young Polish Woman Brought Hope and Courage to China

(Minghui.org) A Falun Gong practitioner named Maria has had an extraordinary journey since she took up the practice more than 15 years ago. Maria is originally from Poland, and she is one of the Westerners who went to Tiananmen Square to stage a peaceful protest after the persecution began in July 1999.

In February 2002, Maria visited Shanghai, Hangzhou, Suzhou, Nanjing and finally arrived in Beijing. Everywhere she went, she distributed Falun Gong pamphlets and tried to tell the Chinese people what Falun Gong is really about. Maria was arrested on February 14 on the way to Tiananmen Square. While she was detained, she told the police officers, “Truthfulness-Compassion-Forbearance will not compromise with evil.”

Before her trip to China, Maria joined an “SOS-Walk” in Europe, to raise awareness of the persecution. Over the course of 11 days, she walked 300 miles, and had a chance to tell then Polish president Aleksander Kwaśniewski about the persecution of Falun Gong. The president promised Maria that he would fully support Falun Gong practitioners, and urge the Chinese communist regime to stop the persecution.

After returning from China, Maria flew to Rome on May 14, 2002. She was granted a private audience with Pope John Paul II. During the brief meeting, Maria gave the Pope a copy of Falun Gong's main book Zhuan Falun and told him about the persecution. The Pope offered a blessing for Falun Dafa around the world. 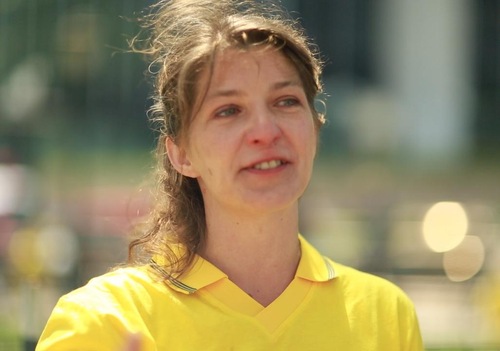 Maria tears up as she recalls her experiences.

When she recalled how she found Falun Gong, Maria began to tear up.

She was a student at Harvard University. “One day, I came across a poster with a picture of people meditating. They looked so serene,” she said. “I appreciated that it was free... The first time I did the exercises, I felt such a powerful energy that I knew I found it – the true Master and the true teaching.”

Maria feels that the most beautiful thing about practicing Falun Gong is gaining inner peace, but what moved her the most is when she learned that the practice was persecuted in China.

“I heard this story that Jiang Zemin said that Truth, Compassion, and Tolerance are not in accordance with the Chinese Communist Party (CCP) , therefore they’re illegal. I figured, 'How is that possible?' My parents and grandparents have taught me those moral values.

Before being arrested in China, Maria had wonderful experiences talking to Chinese about Falun Gong there.

“I remember I was in Nanjing for [the Chinese] New Year’s Day in a park. The park was evergreen, but everything was so gray because of the pollution. There was what was supposed to be a river, but it was really flowing trash. There was a concrete lotus flower by the river, in the park. I sat there in full lotus [meditating].

“Chinese people were so moved by it, I actually became a tourist attraction. People would put children on my legs, and we would all do [meditation] and take pictures.

“People would tell me stories of how they practiced Falun Gong. I would tell them that all over the world, Falun Dafa is honored and cherished, and it’s only in China that is it persecuted; [I told them] it’s actually not true that the rest of the world has eradicated Falun Dafa. It gave them so much courage.

“A man came up to me, and said, 'My wife is a Communist Party member, so she cannot listen.' She put earphones in her ears and listened to music while he talked to me. He said, 'I practice Falun Gong, but because of the pressure [from the CCP], I stopped. But I really am grateful that you came.' He invited me to a picnic, and it was a really beautiful experience.”

Maria's motive to travel to Beijing was noble. “I knew that there was a very small chance that something really bad would happen to me. I knew that the people in China are suffering so much more. If, through my experience and my person, I could give them hope that what they do is actually heard and seen outside of China and give them courage, that would be the greatest thing I could do.”

Her inspiration to make the trip was simple. “I am from Poland. Poland was the first country in the world that abolished communism. We have a Pope who said, thirty years ago, 'Have faith. Have courage and have faith.'

“I lived with the history and heritage of a people who have abolished the oppressors, because Poland has been known for it. Going to China for me was not a big deal.”

Falun Gong's principles have helped Maria improve her life. “Teacher [Li Hongzhi] gives us a mirror in others, so that I can see where I am. I can actually see if I tell the truth, if I am kind and compassionate, and if I’m tolerant.

Maria has a message for the Chinese people: