(Minghui.org) Eighty-three Falun Gong practitioners in New York have filed criminal complaints against former Chinese Communist Party leader Jiang Zemin with the Supreme People's Procuratorate and the Supreme People's Court in China. Their indictments join the tens of thousands of complaints against Jiang that Falun Gong practitioners in China and around the world have filed over the last two months.

Jiang Zemin, the target of the criminal complaints, singlehandedly initiated the persecution of Falun Gong on July 20, 1999. Jiang also created an extralegal agency to persecute Falun Gong (the 610 Office) with the power to override police and judicial organs in carrying out his directives. As a result, over the last 16 years, at least 3,800 Falun Gong practitioners have been tortured to death, but the actual death toll is likely to be much higher, because information about such cases is tightly censored in China.

At a rally in front of the Chinese Consulate in New York on Friday afternoon, July 3, 2015, ten New York-based Falun Gong plaintiffs spoke about the persecution they experienced in China. Their criminal complaints charge Jiang with unlawful imprisonment, depriving citizens of their constitutional rights to freedom of belief, and abuse of power, among other crimes.

Gao Weiwei is the older sister of a practitioner who was tortured to death in China. She spoke about her younger sister Gao Rongrong being severely disfigured by labor camp guards in the Longshan Forced Labor Camp in Shenyang in July 2003. The guards burned Gao Rongrong with electric shock batons. “Her entire body was harmed and her face was disfigured,” Ms. Gao said.

In June 2005, Gao Rongrong was tortured to death at the infamous Masanjia Labor Camp in Liaoning Province.

A photograph of Gao Rongrong lying on a hospital bed before her death shows the horrific burns to her face. The photograph has been used on Falun Gong display boards and flyers around the world, and also by human rights organizations, such as Amnesty International. 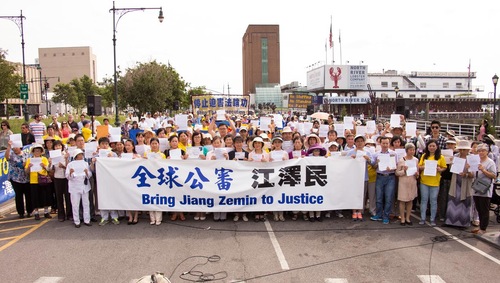 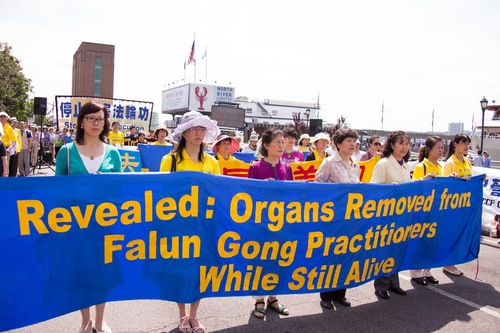 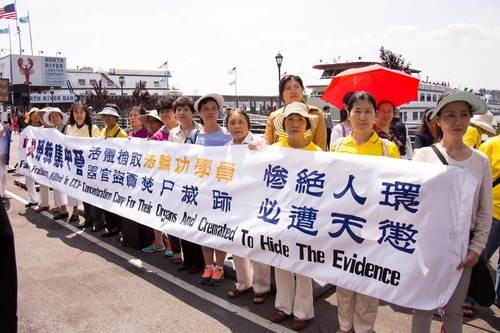 Falun Gong practitioner Li Jing was incarcerated and tortured in Chatou Forced Labor Camp in Guangzhou. She filed a criminal complaint against Jiang Zemin and spoke about the persecution she experienced. “Camp guards hung me up and pulled my limbs in different directions for a long time,” she told listeners at the rally.

Ms. Li's husband died while she was imprisoned in Guangdong Women's Prison. “I did not know [about it] until I was released and given a box of his ashes,” she said.

Practitioner Zhao Suhuan was incarcerated in China seven times for practicing Falun Gong. When she was jailed in Shenxin Labor Camp in Shenyang she was injected with toxic drugs.

“My tongue became hard and I suffered a partial loss of memory,” she said. “Another practitioner, Su Juzhen, who was incarcerated in the same cell as me, became a vegetable and later died.”

Other speakers at the rally included representatives from the World Organization to Investigate the Persecution of Falun Gong and the Global Service Center for Quitting the CCP. 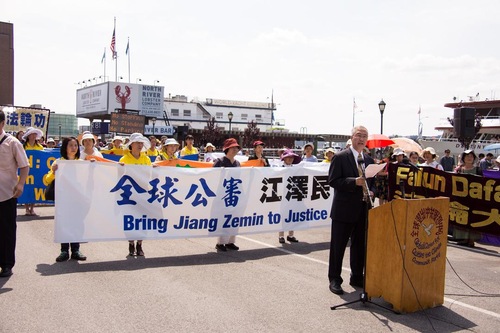 Dr. Wang Zhiyuan, spokesperson for the World Organization to Investigate the Persecution of Falun Gong, speaking at the rally

Dr. Wang Zhiyuan, spokesperson for the World Organization to Investigate the Persecution of Falun Gong (WOIPFG), said the fact that more than 40,000 people have filed criminal complaints against Jiang in less than two months is a historical milestone.

“Since July 1999, Jiang Zemin and his faction have manipulated the entire state apparatus, including the judicial system, the army, armed police, and medical system to conduct genocide against Falun Gong practitioners through live organ harvesting,” Dr. Wang said. “Jiang and his followers have committed crimes of genocide and crimes against humanity.”

WOIPFG is calling on governments, human rights organizations, and all people of conscience to join the investigation of Jiang's crimes against humanity. 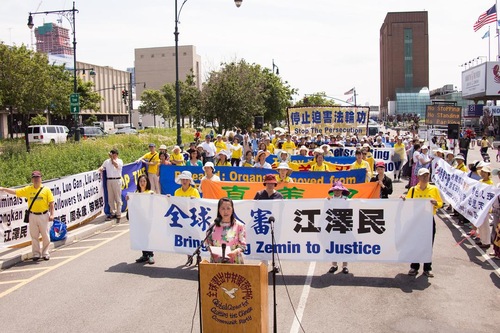 Yi Rong, director of the Global Service Center for Quitting the Chinese Communist Party, speaks at the rally

Director Yi Rong of the Global Service Center for Quitting the CCP said that millions of Falun Gong practitioners in China have suffered torture, imprisonment, and brainwashing because of Jiang's persecution policy. “And countless practitioners have been tortured to death or killed so that the CCP could harvest their organs for huge profits,” she said.

“Jiang has committed the crimes of genocide, murder, torture, and crimes against humanity, among others. This historic wave of calling to bring Jiang to justice is gaining momentum. He must be brought to justice,” Yi said.

““I Am Glad that You Have Freedom Here””