Germany: Telling People about Falun Gong at a Historical Festival

(Minghui.org) The bi-annual Bürgerfest in Regensburg (Citizens Festival) was held on June 19-21, 2015, in this beautiful historical town on the banks of the River Danube. Traditional costumes, folk music, and games attracted tourists from across the country to the festival, which has a history of a few hundred years.

Local Falun Gong practitioners also set up a booth near the train station, where they told people about the ancient Chinese cultivation practice, and the persecution in China. 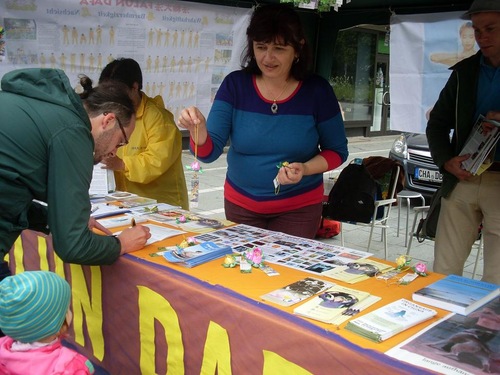 A tourist signs the petition at the Falun Gong booth to support their peaceful resistance. 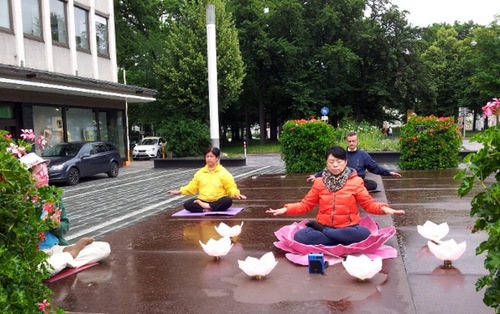 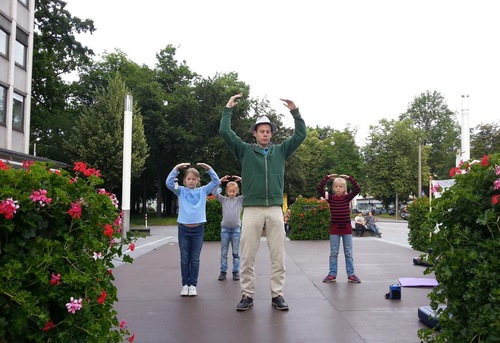 Three children learn the exercises from a practitioner.

The peaceful music from the practitioners' booth touched many people. They asked what the music was, and where they could buy the CDs. Some people stopped and watched the exercise demonstration, and were interested in joining the exercise site on weekends. Many people were shocked by the brutal facts about the persecution.

“We cannot keep silent facing such a crime,” a German lady said, “We must stand out and speak for justice. It is related to everyone's conscience.”

Many people signed the petition condemning the persecution. One gentleman from Zürich knew very well about the Chinese state-sanctioned organ harvesting from living Falun Gong practitioners.

He used to work at two famous Swiss hospitals, and knows some experts in organ transplantation. He said to the practitioners that he has been trying to tell all his coworkers about the organ harvesting in China.

“Everyone should know about this. It is too cruel and too incredible,” he took a stack of materials about the organ harvesting for his friends.