20,644 People File Complaints Against Jiang Zemin in the Past Week

(Minghui.org) 20,644 Falun Gong practitioners and their family members filed criminal complaints against Jiang Zemin, former head of the Chinese Communist Party (CCP) in the week of June 26 to July 2. They urged the Supreme People's Procuratorate and the Supreme People's Court to bring Jiang to justice for his abuses of power in orchestrating the persecution of Falun Gong in China.

The complaints charge Jiang with unlawful imprisonment, depriving citizens of their constitutional right to freedom of belief, abuse of power, and many more crimes.

Jiang initiated the persecution of Falun Gong on July 20, 1999, and created the 610 Office, giving it the power to override the police and judicial system to carry out his directive.

Copies of 34,581 complaints from 43,404 people were submitted to the Minghui website from the end of May to the beginning of July.

Some cases were filed outside of China: 393 Falun Gong practitioners in 19 other countries have also filed complaints against Jiang with the Supreme People's Procuratorate. Most of them left China to avoid being persecuted. 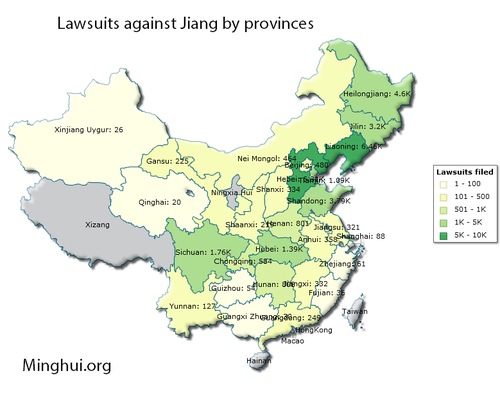 Distribution of the 34,581 complaints and 43,404 plaintiffs by province 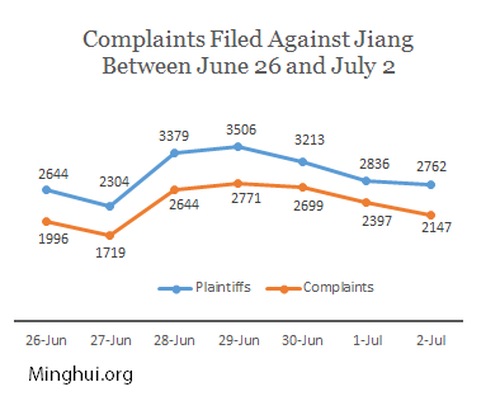 In one day alone this past week, Minghui received copies of complaints from 3506 plaintiffs.

Among the 43,404 plaintiffs, nearly 8000 were illegally detained in detention centers and brainwashing centers; more than 3000 were held in forced labor camps or prisons (some are still incarcerated); 94 were tortured in mental hospitals with nerve-damaging drugs; and 543 became severely disabled. Some family members of the practitioners who were tortured to death filed criminal complaints against Jiang.

The news is spreading fast, and the public is expressing its support. Some have said, “Jiang Zemin is bad. He never did anything good for the people. You must win the lawsuit and bring him to justice.”

A postal worker told a Falun Gong practitioner, “Call me again when you have something like that to mail.”

One practitioner called the Supreme People's Procuratorate (010-65209114) before mailing his complaint. He asked, “Do you accept complaints against Jiang Zemin?” “Yes, we do. Mail them as soon as you can,” was the answer.

Falun Gong practitioners in Washington DC, Los Angeles, Sydney, and elsewhere have held rallies in front of Chinese embassies and consulates to draw attention to the lawsuits against Jiang.

Congressman Chris Smith, a senior member of the Foreign Affairs Committee and chairman of its Global Human Rights and International Organization Subcommittee, said he supported the criminal complaints against Jiang.

Commenting during a hearing on June 25, 2015, Smith said, “The courage and the bravery of the Chinese people that keep filing these complaints, that keeps them coming out, pushing for democracy, and for accountability on the part of the Party and the government, is awe-inspiring, because so many of them... are punished in some way, and yet they can persist.

“The Western world, the free world, anywhere in the world, should be having their backs, every day of the week and 24/7, to say, 'We stand with you and we stand with the suppressed'.”