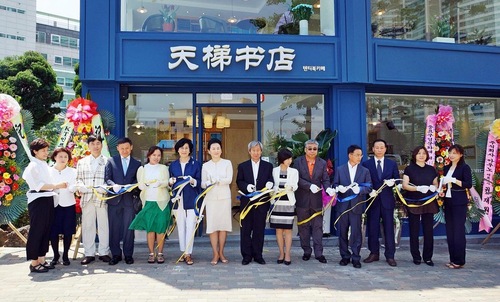 Ribbon-cutting of the opening ceremony 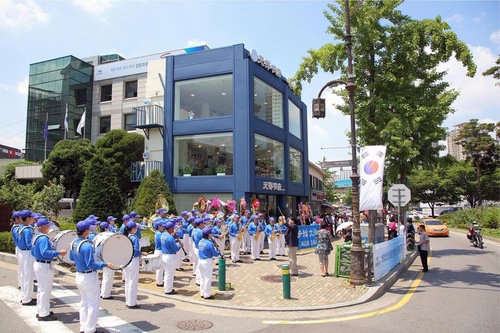 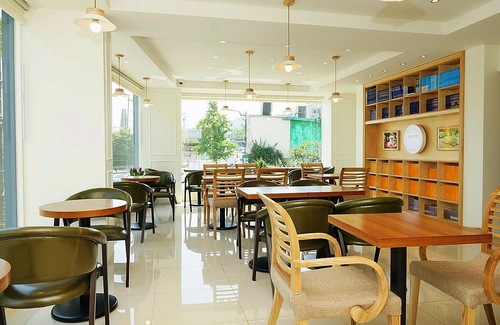 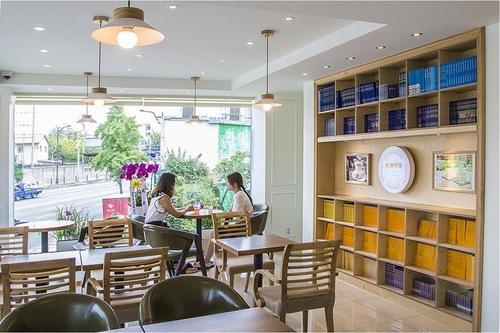 Store visitors can chat over coffee or read books on the first and second story. 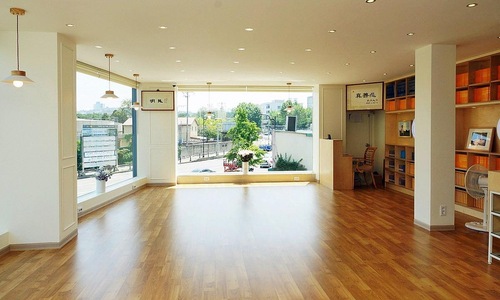 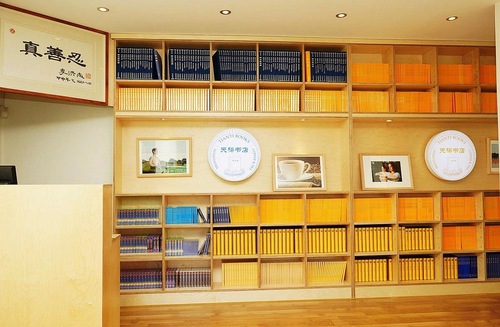 The third story of the store has a heated floor and will be used for free exercise teaching classes.

The store features a broad view of the city, including the landmark of Seoul Bukhansan.

Tianti Books opened its first online bookstore in the spring of 2007, providing Falun Dafa books, DVDs, and CDs to people wishing to learn Falun Dafa. It opened the first brick and mortar store in midtown Manhattan in October 2013.

“Congratulations to the opening of the Tianti Books Store in Seoul,” wrote Mr. Quan Hongda, chair of Falun Dafa Association in Korea, in his greeting letter. “It is our utmost honor to have you come here.”

The three-story store is located at a busy subway exit and close to the center of Seoul. Several famous tourist spots nearby bring a continuous stream of people to this area.

As no skyscrapers are allowed in this area, customers can enjoy the view of the mountains and parks from the store.

Ms. Zhang Shu, a staff member of the store, said that the store plans to hold free nine-day Falun Dafa seminars. Since Americans from a U.S. military base nearby often visit this area, English-language books and workshops will be offered too.

Shortly before remodeling for the store began, tiny white udumbara flowers were discovered on a mirror in the building on February 3, 2015. The udumbara flower is said in Buddhist legend to bloom only once every 3,000 years, the last time being before the birth of Buddha. Spotted again around the world in the past 20 years or so, some say the udumbara herald the coming of a great sage or enlightened being.

Feeling blessed by the sacred flowers, store management put the mirror with udumbara flowers in a glass box and displayed it on a book shelf on the first floor.

Udumbara flowers on display in the store.

Falun Dafa (also called Falun Gong) is an advanced practice of self-cultivation based on the Buddha School of teachings, founded by Mr. Li Hongzhi, the practice’s master. It is a discipline in which “assimilation to the highest qualities of the universe—Zhen, Shan, Ren (Truthfulness, Compassion, Forbearance)—is the foundation of practice. Practice is guided by these supreme qualities, and based on the very laws which underlie the development of the cosmos.”

Master Li’s teachings are set forth in a number of texts, including Zhuan Falun (the main book), Falun Gong, The Great Consummation Way of Falun Dafa, Essentials for Further Advancement, and Hong Yin. These and other works have been translated into thirty-eight languages, and are published and distributed worldwide.

“European Practitioner: I Never Realized I Could Be So Happy”