(Minghui.org) The morning started with people doing Falun Gong exercises in Central Park in Delhi on July 20, marking the 16th year since the persecution in China began. Crowds of people watched the practitioners, and many wanted to learn them and took flyers.

Later in the day, a screening of Human Harvest, a Peabody Award-winning documentary, was held at the Press Club of India in New Delhi. The film covers the Chinese regime's killing of Falun Gong practitioners for their organs in China. 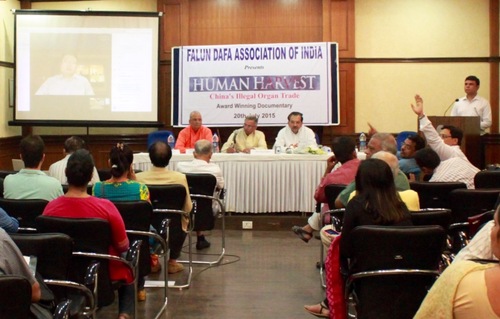 The event was well-attended by invited guests from the media and community leaders. After the screening, Leon Lee, the director of the film, took questions from the audience.

The documentary created quite a stir, and the audience asked thought-provoking questions of Leon Lee and the community leaders about what kind of stance and action the government could take against organ harvesting.

The day's events concluded with a candlelight vigil at the Jantar Mantar Observatory.

“Snapshot of Falun Gong Practitioners Whose Copies of Lawsuits Against Jiang Zemin Were Received by Minghui on July 15 and 16, 2015”