(Minghui.org) Today's news from China includes incidents of persecution that took place in 8 cities or counties in 5 provinces. According to this report, 4 Falun Gong practitioners were subjected to mistreatment during their detention, and at least 12 practitioners were illegally arrested. 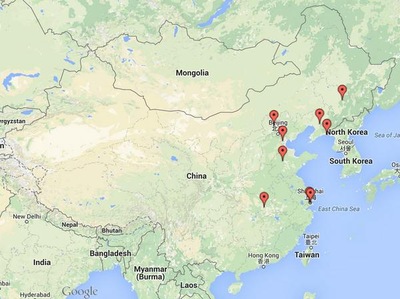 Ms. Li Chunlian from Jiangxia District was illegally held in the Erzhigou Detention Center in Dongxihu District, and was to be released on June 15, 2015. Her family went to the detention center after 7:00 a.m. that day, but was told by the receptionist at the detention center that Ms. Li had been taken to a brainwashing center. It was not clear which brainwashing center she was transferred to.

Mr. Chen Yuxin has been held in the No. 10 Ward of the Tilanqiao Prison since September 2014. He has not been allowed to talk to other inmates, and has been verbally abused and threatened by the head of the inmates.

Mr. Ma Yongkang from Tianshui City, Gansu Province is also held in the No. 10 Ward.

Ms. Song Liping lives in the dorm of the Jinan Chemical Fiber Plant. She was arrested around June 24, 2015, and her home ransacked.

Ms. Chi Qing'ai was imprisoned in March 2006 for five-and-a-half years in the No. 1 Ward of the Liaoning Women's Prison. She suffered a mental collapse after being severely tortured during her imprisonment. She is still mentally disordered.

Ms. Wang Bin was arrested by officers from the Donggang Development Zone Police Department on June 20, 2015.

Several practitioners were studying the Fa in Ms. Shen Bilian's home on the morning of June 30, 2015, when officers from the Xinzhuang Police Station showed up and arrested them. The police also went to Ms. Tong Guojiao's home and ransacked it.

Ms. Liang Yuling was arrested on June 30, 2015, for filing a lawsuit against Jiang Zemin. The police ransacked her home and confiscated Falun Dafa books and a computer.

Officers from the Domestic Security Division and the Patrol Team in Chicheng County carried out coordinated arrests on the morning of June 29, 2015. Practitioners arrested at the same time in different locations include: Mr. Ren Jianhai, Mr. Sun Zhiqing, Mr. Zhang Yongli, Ms. Zhang Yunchan, and her husband Mr. Cui Xiang.

The officers ransacked the practitioners' homes and confiscated three printers, a computer, hundreds of blank DVDs, and Falun Dafa books from Mr. Ren's home. They took a computer and two printers from Ms. Zhang Yunchan's home.

Mr. Cui has been released, while the other four practitioners are being held at either the patrol team or the county detention center.

Mr. Xing Junjie and Ms. Tian Xiuyun were arrested by officers from the Baoping Police Station at a post office in the Baodi District when they were mailing their lawsuit against Jiang Zemin.

“New Practitioner: The Changes I Experienced After Cultivating for One Year”