(Minghui.org) A rally held last week in front of the International Tribunal in The Hague called attention to global efforts to bring former Chinese dictator Jiang Zemin to justice for launching the persecution of Falun Gong in 1999.

Since a Chinese law allowing for citizens to be plaintiffs in criminal cases went into effect on May 1, over 80,000 Falun Gong practitioners have filed lawsuits against Jiang Zemin with the Supreme People's Court of China. 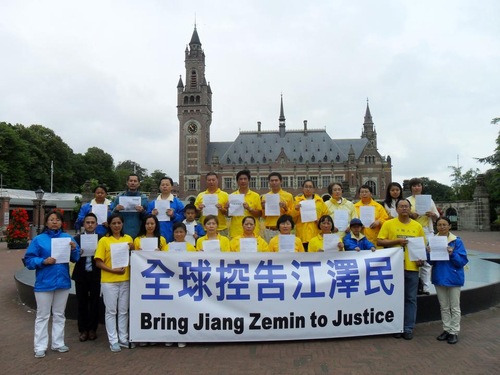 “We are here today in front of the International Tribunal in The Hague to support the global effort to bring Jiang Zemin to justice,” Mr. Zhang said. “Jiang Zemin has committed crimes against humanity, genocide and other crimes for having launched this persecution campaign against Falun Gong practitioners. We hope to have Jiang tried and stop the persecution of Falun Gong in China.”