Student in Sydney, Australia: Jiang Zemin Must Be Prosecuted

(Minghui.org) Every Friday afternoon, Falun Gong practitioners set up an information booth and display posters on Pitt St., the busiest business street in Sydney, Australia. Through their efforts, the practitioners hope to let more people know about the persecution of Falun Gong in China.

Since the Australian SBS TV broadcast the documentary film Human Harvest: China's Organ Trafficking in April 2015, more people have become aware that large numbers of Falun Gong practitioners imprisoned for their belief in China have been killed and their organs harvested for the transplant industry.

Bringing Awareness of Falun Gong and Organ Harvesting to the Australians 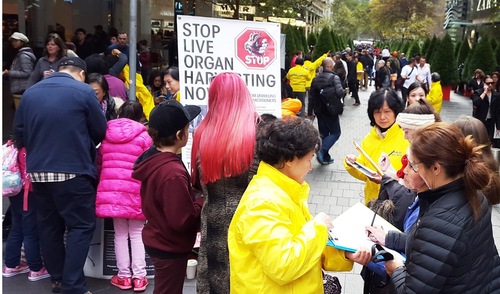 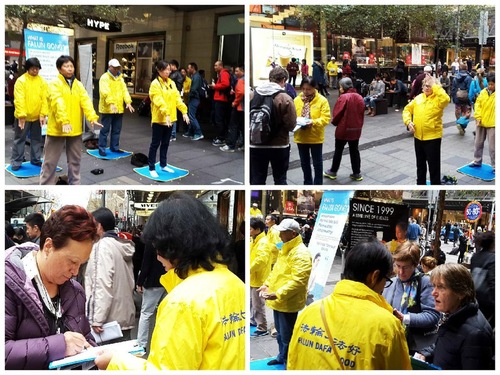 Students Ask How They Can Help

A group of undergraduate students paused at the information booth, where each one signed the petition.

“I'm pretty sure I saw the Human Harvest documentary on television,” said Marcus Vella, one of the students. “This confronts the conscience of everyone. Let me know what I can do to help. I definitely will sign the petition.”

“In my opinion, an outreach like this to the general public is very effective. If we pressure our government, they have to get involved,” he added.

Erin Doyle: No Person's Life More Valuable Than That of Another

Erin Doyle, another student, said, “I also saw the SBS documentary that brought organ harvesting to our attention. This is awful. I will also sign the petition. Not just that, I will also put the information on Facebook, so more people will hear about it.”

He added, “The people do not want to anger China, but the Chinese market is very very dependent on ours. It will be good if we can help in some way.”

Student Rhian spoke up, “I have seen the SBS documentary, and it's just terrible that anyone could commit such a human rights abuse. They treat people like animals. I can only say that I'm one hundred percent sure that something like organ harvesting should not happen.”

Practitioners also told him about the rise in the number of criminal complaints against Jiang Zemin, the former leader of the Chinese Communist Party who ordered the violent suppression of Falun Gong. Rhian fully agrees that Jiang should be prosecuted.

Rhian also expressed shock when hearing that some Australians go to China for organ transplants. He said that they must be told that this is unacceptable, and that it is like trading one person's life for another, or that one person's life is more valuable than that of another. 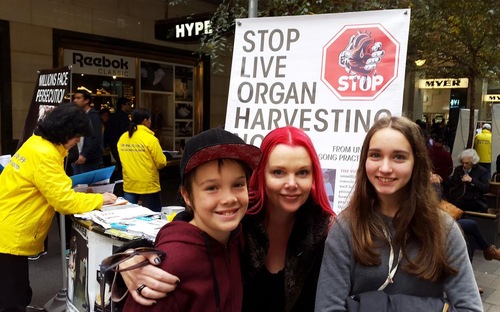 Anne Graham and her family

Anne Graham and her family signed the petition calling for an end to organ harvesting in China.

“My father has made me aware of the organ harvesting issue,” Anne said. “He knows a lot of about China, because he does a lot of business in China and travels to China all the time. He has a lot of Chinese friends, and they talk about this. He told me that's a most horrible thing and it has not been stopped. He was just horrified by what happens.”

“We must raise awareness. Those who have heard of it must tell others when they visit people in China, so people will learn that this situation is unacceptable. You have to let everyone know.”

When she heard that more than 60,000 Chinese people have submitted criminal complaints against Jiang Zemin, Anne said, “Wow! I think that's good. I think they need to keep doing that. And that's one way to raise awareness and try to stop that kind of abuse of humanity. More people should stand there to protest and collect signatures.”

All Comes Down to Money

Passerby Joanne Henley and her friend stopped to learn more about organ harvesting in China.

Joanne said, “This is so shameful that they claim that one person is worth 200,000 dollars. I wonder where the money goes. Since almost everyone has heard about it, why don't they stop it?”

She said she had heard about Falun Gong in the past. “Yes, it has such peaceful exercise movement. What's wrong with that? Why is the Chinese government so scared of them? What is our government doing about it?”

“It's just so terrible. Once you talked about the situation over there, I wanted to know what's going on. What I mean is, why does the Australian government do nothing about it?”