(Minghui.org) The Chinese Communist Party launched the nationwide persecution of Falun Gong on July 20, 1999. At the same time, Falun Gong practitioners around the world started what has become a 16-year long peaceful resistance.

Every year, around July 20, a series of activities, including rallies, grand march, and candlelight vigil, are held in Washington D.C., commemorating those who died due to the persecution, and calling for its end. And every year, U.S. lawmakers speak out and express their support for the peaceful resistance.

This year, the Minghui website has received support letters from thirteen congressmen, and one senator to date. The lawmakers acknowledged the physical, mental, and spiritual benefits derived from practicing Falun Gong, and several also told practitioners that they have sponsored a resolution condemning the persecution, especially the Chinese state-sanctioned organ harvesting from prisoners of conscience, including a large mass of Falun Gong practitioners. 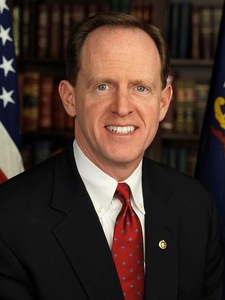 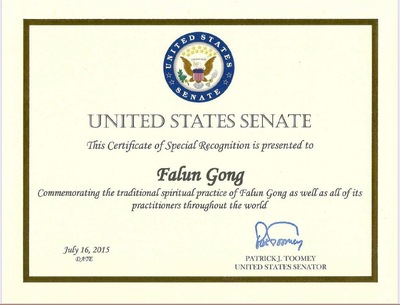 The special recognition from Senator Toomey

Congressman Blaine Luetkemeyer from Missouri said at the beginning of his letter that one of the founding principles of our great nation is the freedom of religion.

Congressman Luetkemeyer is familiar with the details surrounding the persecution of Falun Gong. He said in his letter, “Since coming to Congress, I have consistently fought for religious liberty and remain committed in doing so going forward.”

He told practitioners, “You may be interested to know that I am a proud co-sponsor of H. Res. 343, a resolution which expresses Congress' grave concern over the state-sanctioned organ harvesting from prisoners in the PRC, most specifically from practitioners of Falun Gong.”

He concluded by writing, “I want to express my admiration for your continued commitment to peace and non-violence in your efforts to freely exercise your religious rights.” 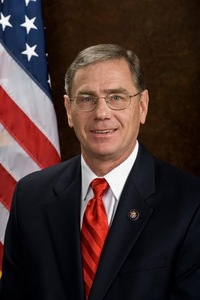 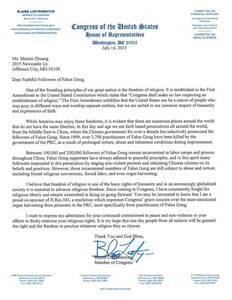 Congressman Blaine Luetkemeyer from Missouri and his letter

Congressman Keith Ellison from Minnesota said in his letter, “Your commitment to prevent attacks on the peaceful practice of Falun Gong is an inspiring example of the power of collective action.”

“The unjust oppression of Chinese citizens practicing Falun Gong has gone on for too long.”

He praised Falun Gong for its peaceful and spiritual faith, and said, “The Chinese government's troubling persecution of Falun Gong remains a deep concern to policy makers.” 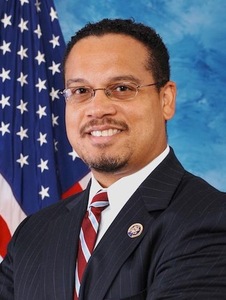 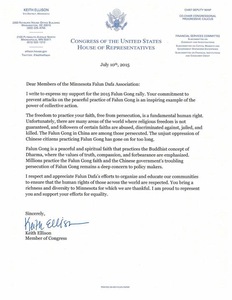 Congressman Keith Ellison from Minnesota and his letter

Congressman Paul Tonko from New York said, “I am proud to add my voice to your call for an end to the violence against those who embrace the practice of Falun Gong.”

He said, “Falun Dafa uses meditation and exercise to offer important lessons about daily life. Despite years of persecution, the influence of this spiritual movement has only continued to grow. Falun Dafa is a practice of peace and tolerance that can impact health and well-being in positive ways.”

Congressman Tonko is also one of the co-sponsors of House Resolution 343. 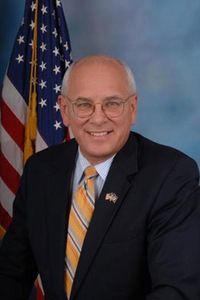 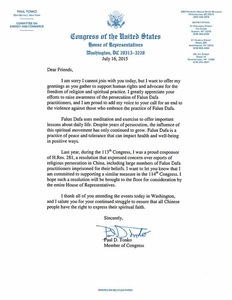 Congressman Paul Tonko from New York and his letter

Congressman Reid J. Ribble from Wisconsin condemned the persecution, and said, “We must preserve the right throughout the world to speak freely and express opinions in a peaceful way and allow every voice to be heard. No man, woman, or child in this world should have to fear their government taking away their most basic human rights.”

Congressman Ribble was a co-sponsor of H. Res. 281, which expressed concern over organ harvesting last year. He said that he would continue to work with his colleagues in Congress to support Falun Gong's peaceful resistance. 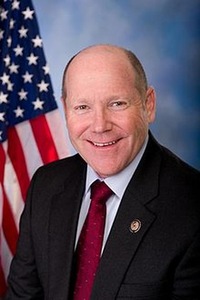 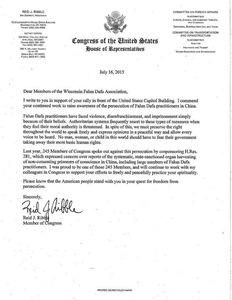 Congressman Reid J. Ribble from Wisconsin and his letter

Congressman Joseph J. Heck from Nevada said that as a physician, he understands the medical benefits from slow motion exercises. He then said, “The practice of Falun Dafa is designed not only to help people improve physical condition but to also reduce anxiety, strengthen moral standards and stop harmful personal habits or addictions. Those who practice Falun Dafa serve our community by acting as stewards of honesty, courtesy, loyalty and unselfishness.”

He said that the U.S. Congress has passed H. Res. 605 asking China to “Immediately cease and desist from its campaign to persecute, intimidate, imprison and torture Falun Gong.” 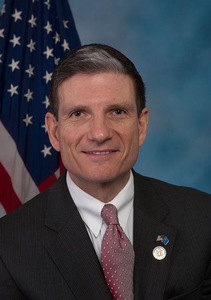 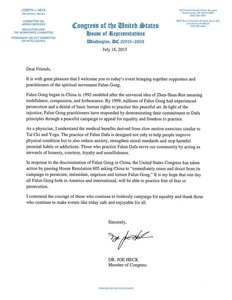 Congressman Joseph J. Heck from Nevada and his letter

She said, “We must do everything we can to encourage mutual respect and religious freedom across the world.”

“The dedication that Falun Dafa practitioners have shown to the pursuit of Truthfulness, Compassion, and Forbearance is admirable, and I am proud to stand with you in calling for an end to your religious persecution.” 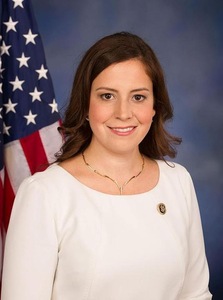 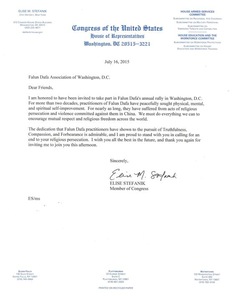 Congresswoman Elise Stefanik from New York and her letter

Congressman Bill Pascrell from New Jersey said, “No person should face persecution for their beliefs, especially when those beliefs are practiced peacefully. And it is important to raise awareness of discriminatory and heavy handed policies too many are facing in China.”

Congressman Pascrell wished practitioners well, “in their efforts giving a voice to all the followers of Falun Gong around the world who have been victims of oppression.” 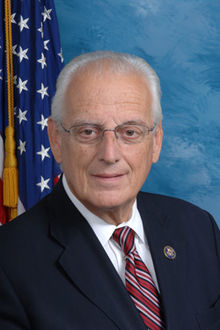 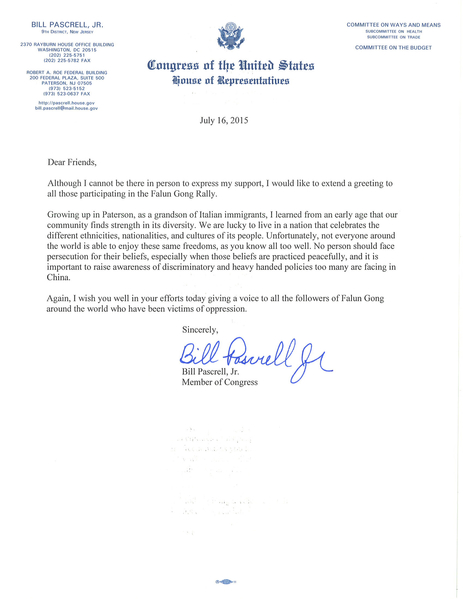 Congressman Bill Pascrell from New Jersey and his letter

Congressman Albio Sires from New Jersey said, “Falun Gong has and continues to expose the persecution by Chinese communist leaders, and inspire people to speak out against human rights abuse. Falun Gong's mission is to peacefully promote the traditional spiritual practice of the Buddha school, and its philosophy is centered in truthfulness, compassion, and tolerance.” 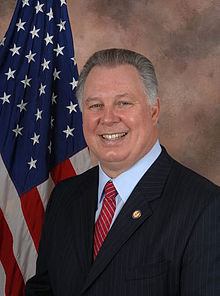 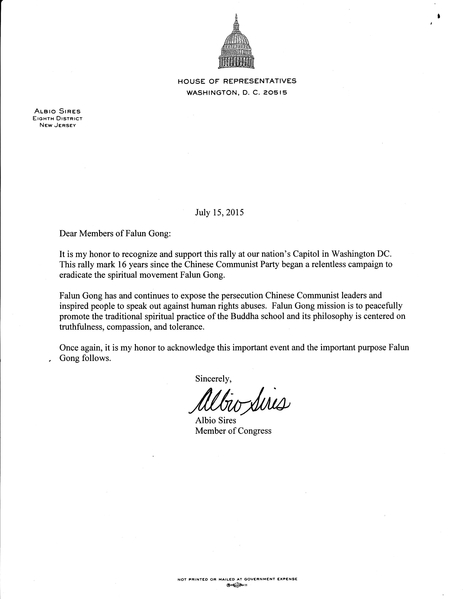 Congressman Albio Sires from New Jersey and his letter

Congressman Leonard Lance from New Jersey said, “I would like to extend my strong support for the Rally to Stop the Persecution of Falun Gong.”

“Recently, the Falun Gong Information Center has reported that over 34,000 legal complaints have been filed against former Chinese leader, Jiang Zemin, alleging unlawful imprisonment, torture, corruption, abuse of power, and other crimes.” (Note: The number of complaints has reached over 100 thousand in the last week of July 2015.)

“By practicing the freedoms of speech and assembly so many in China are denied, you are shining light on the abuse of human rights in China. It is my sincerest hope that the policies of the Chinese government against the followers of Falun Gong are soon reversed.” 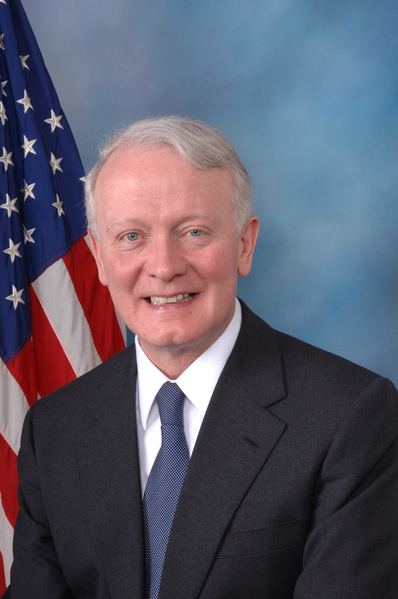 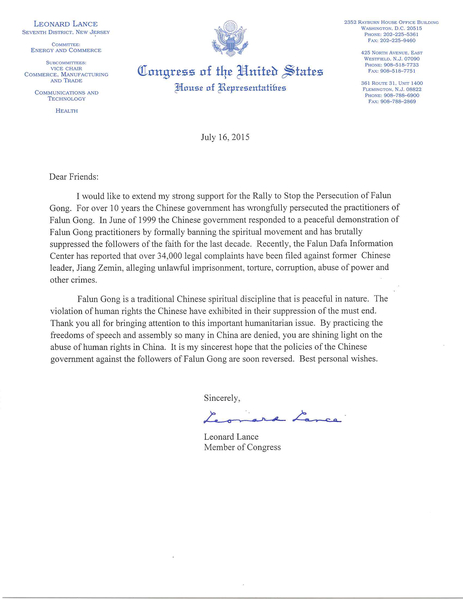 Congressman Leonard Lance from New Jersey and his letter

Congressman Bill Foster from Illinois said that his father was a civil rights lawyer, and he was raised with a strong belief that all people deserve equal rights and protection under the law.

He said, “The subjugation of peaceful practitioners to forced conversions and reeducation camps is deeply disconcerting and should end immediately.”

Speaking of the lawsuits against Jiang Zemin, Congressman Foster said, “It is my hope that the Chinese government will recognize the importance of permitting free expression for all of its citizens, and will end its persecutory activities.” 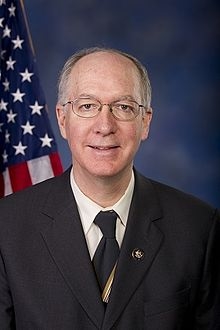 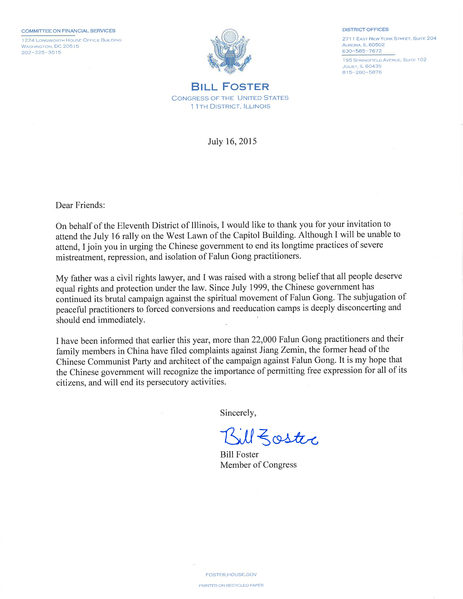 Congressman Bill Foster from Illinois and his letter

Congresswoman Vicky Hartzler from Missouri said, “Last Congress, I cosponsored legislation that demanded the Communist Party of China bring an end to the persecution of prisoners of conscience. It is absolutely imperative that these egregious violations of human decency come to an end and that all religious minorities in China are free from all persecution. I commend you all for your hard work and determination in advocating for this cause. Please know that while I am in Congress I will continue to fight for human rights protections for all.” 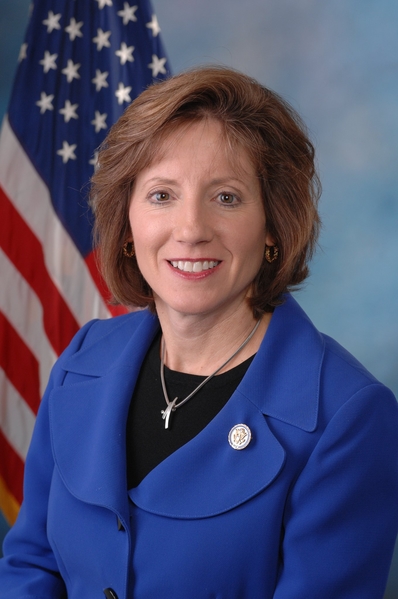 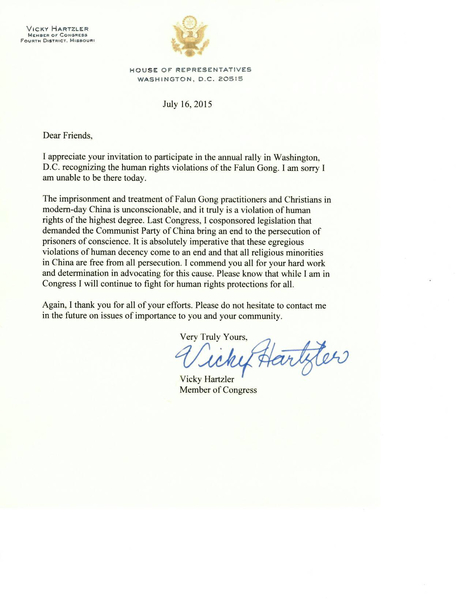 Congresswoman Vicky Hartzler from Missouri and her letter

Congressman Alan Lowenthal from California, a cosponsor of H. Res. 281, said, “We are here to shine a light on the fight for these basic human rights in China. The persecution of Falun Gong practitioners is a perfect example of how the freedom of speech and the freedom to worship are being denied to Chinese citizens.”

“As a Member of Congress, serving on the House Foreign Affairs Committee and the Asia Pacific Subcommittee, as well as a member of the Tom Lantos Human Rights Commission, I will continue to champion human rights and religious freedom issues in China and around the world. We must continue to educate the international community on the ongoing human rights violations against peaceful activists in China, and in particular, Falun Gong practitioners.” 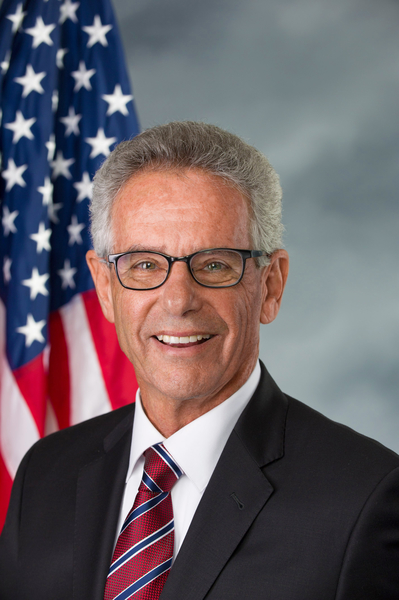 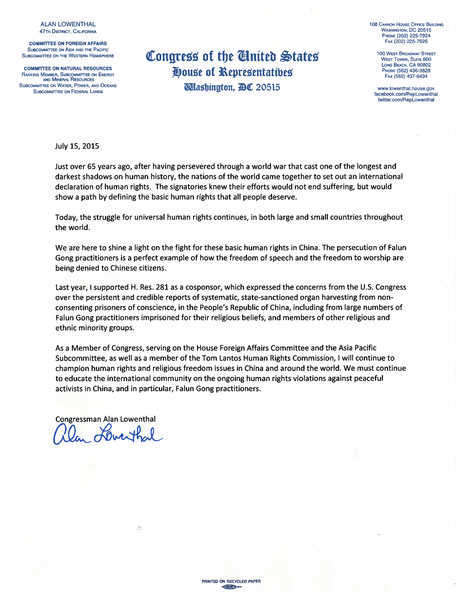 Congressman Alan Lowenthal from California and his letter

Congressman Robert Pittenger from North Carolina said, “Falun Gong is a peaceful spiritual movement that should be afforded the opportunity to practice their religious experience without the egregious abuse and persecution of the Chinese government.”

“Today's rally marks 16 years since the Chinese Communist Party began their relentless campaign to eradicate the spiritual movement of Falun Gong and oppress its followers.”

“As a Christian and as a strong supporter of religious freedom, I stand in full support of those gathered on Capitol Hill today to advocate for this important issue, and of Falun Gong's followers in China and around the world.” 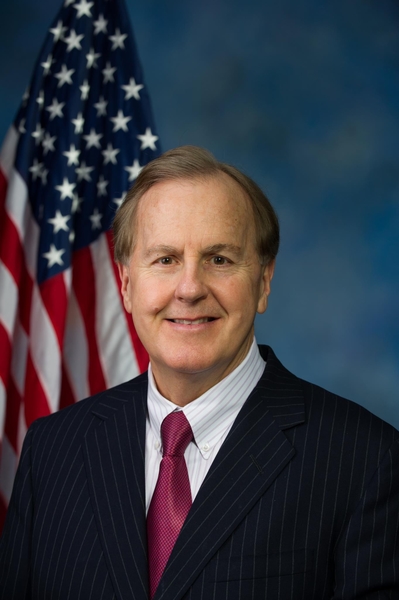 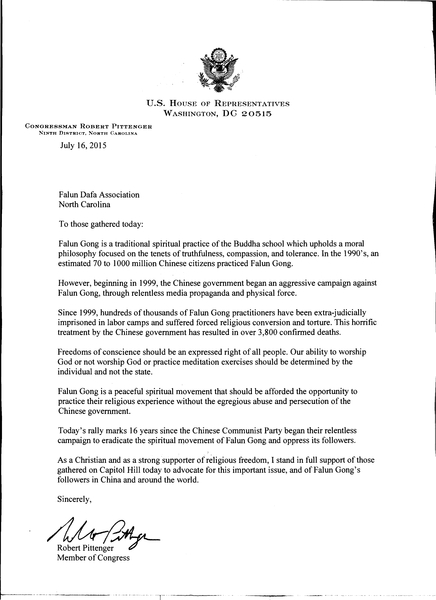 Congressman Robert Pittenger from North Carolina and his letter

“Improving Myself Under Master's Compassion and Care”